COVID-19 is war and some countries are starting to win

The latest coronavirus data shows continuing crises in most European countries. But, as Alan Austin reports, there are positive signs elsewhere.

THE CURRENT coronavirus pandemic has been likened to war. We can indeed see several parallels with World War One, 1914 to 1918.

Every country is affected, although some worse than others. There are two clear theatres – Western Europe and the rest of the world. The impact is different in those separate regions, and the responses will need to be different also.

The reasons for this are complex and yet to be finally determined. Australians, New Zealanders and Canadians usually greet people with handshakes. In some Asian countries, it’s with a polite bow.  But Italians, the French and the Spanish routinely kiss friends and colleagues to say hello and goodbye, including on first introduction. Depending on the region, it may be two kisses, or three, or four.

One reader of this column observed neatly last week,

Countries like Italy, Spain and Portugal are predominantly Catholic countries, where crowding into churches, taking holy communion, kissing statues and touching holy relics is what people do when there is a crisis — and it is the elderly who are the most ardent. They do so in the belief that these things are blessed and do not transmit the virus. Their religion could be killing them.

Indeed. Plus we still do not know for sure where the virus actually originated.

Away from the epicentre in Italy, there are signs that national responses are slowing the spread of the virus and may be turning the tide, even before the desperately-needed vaccine arrives.

The United Nations Development Programme (UNDP) lists 21 countries outside Europe with populations above one million as having 'very high human development'. These are the rich nations which should have resources to monitor epidemics, hospitals to treat patients and agencies to advise and enforce safety measures. They should also have citizens sufficiently educated to understand infectious diseases and accept the need for the rule of law.

These are the deaths rates per million people in those 21 nations, lowest to highest:

This can be shown visually, thus: 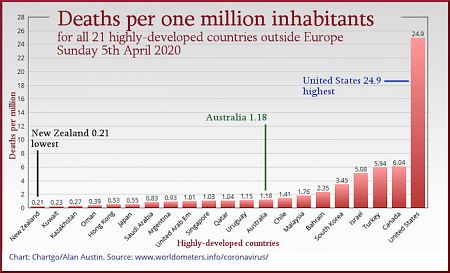 The average rate of death per million population for the 20 developed countries, excluding the USA, is 1.77. The USA is 14 times that level, at 24.9 per million.

Reasons for the disparity

Virtually all countries shown on the graph, above, were proactive in stopping flights from infected regions, quarantining new arrivals and enforcing early home confinement. Plus, of course, testing those with symptoms or at risk. Except one.

We reported last week that Bahrain, South Korea and the Maldives joined China in recording higher numbers of recovered patients than those still battling the infection. This week we can add Peru, which has 914 recovered patients and 759 infected, and Gibraltar with 62 recovered and 56 still unwell.

As more data is collected, the global picture is becoming clearer. (The same caveats noted last week still apply. The numbers provided may not always be reliable. Data used here was current at midday, Sunday, 5 April.)

The Worldometers site now has graphs showing daily additions to infections and deaths for most countries. Infection rates seem to be declining in several countries outside Europe, including New Zealand, Australia, Hong Kong, Uruguay — as well as in South Korea whose chart we saw here last week.

Australia appears to have peaked with 537 new cases reported on 22 March and 528 on 29 March. Daily additions since then have declined. 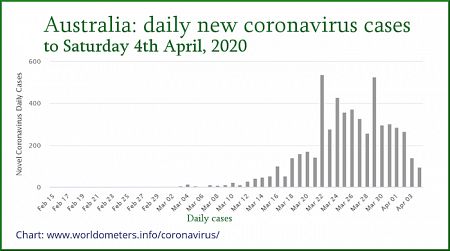 Even some European countries may be past their peak infection rates. These include Austria, with a high of 1,321 on 26 March. We shall see. 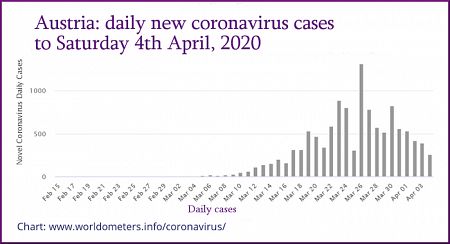 The bizarre case of the USA

In stark contrast to the rest of the developed world outside Europe, and even some countries in Europe, new cases in the USA every day are greater than the day before. 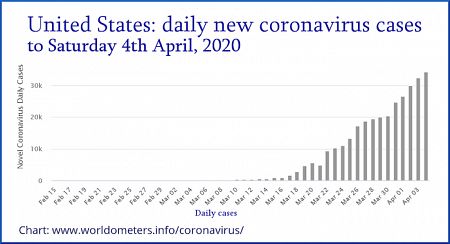 Americans are paying dearly for the failure of their Federal Government to take timely action to stop infected travellers entering and to slow the spread once it had arrived. The Trump Administration is still refusing to provide the resources now urgently needed — clear rules to isolate infected people, vital hospital equipment, and accurate information.

Let’s hope the current battle doesn’t take four years, as did World War One. Without decisive measures, it could.

Most coronavirus statistics are depressing – but not all https://t.co/0LCrDZhYQM @IndependentAus

Alan Austin’s defamation matter is nearly over. Read the latest update here and help out by contributing to the crowd-funding campaign HERE. You can follow Alan Austin on Twitter @AlanAustin001.