Lachlan Barker looks at a major upset in Australia’s version of the FA Cup, as well as Australia’s continuing tribulations on the turning wickets of the UAE.

THE Bentleigh Greens are a second tier club who have made it to the FFA Cup semi-finals, doing so by defeating another tier two team, Adelaide City 2-1 in this week’s quarter-final.

The FFA Cup is the Australian version of the FA Cup of Britain, so first a bit of history.

The FA Cup was first played in 1871-2 and so is one of the oldest still running sporting competitions on Earth.

To compare, league football in England began in 1888, test cricket began in 1877. The British Open golf championship was established in 1860, though the oldest recorded international golf match was in 1682, between Scotland and England (Scotland won). The oldest club tournament is that of the Honourable Company of Edinburgh Golfers, played since 1744.

So it’s not the oldest, but the FA Cup is venerable enough.

It’s a knockout event, so each game is a mini ‘final’, lose and you’re out for the year. The charm of it is that it is open to all clubs down to the ninth tier of British soccer. So a tiny village could end up playing a professional team, unlikely due to round structure, but theoretically possible. Thus sometimes non-league, amateur clubs do well, and have what’s called a ‘lucrative cup run’, in which they go on through the stages and play increasingly bigger, richer and more daunting opponents.

So it is these minnows making it through that provide all the headlines, most of the stand out records go back some time. With Tottenham Hotspurs, “the Spurs”, being the only non-league team to win the FA cup, way back in 1901, when they defeated Sheffield United.

Other names to conjure with are Altrincham, a non-league club that has defeated 16 league teams; Yeovil Town, from Somerset, who defeated league opposition 20 times; and Chasetown, who whilst competing in the 8th tier of British soccer, made it through to the third round of the FA Cup — the  final 64 of 731 teams entered that season. Chasetown were defeated in the third round by second division Cardiff City, the eventual runners-up for that year.

So the FFA instituted the same form here in Australia and it’s a good thing. It allows clubs like the Bentleigh Greens to move through to the later rounds.

I should point out, however, that the rugby league did try this as well. They instituted a mid-week knockout tournament, sponsored by a clothing company originally — the Amco Cup. This tournament likewise saw any rugby league outfit – mostly from NSW and Queensland enter – and come up against full-time professionals. It was won in the first year by Western Division, who defeated Penrith 6-2.

However, the competition then sort of fell into disrepute as the big clubs from Sydney began to hand out some inordinate thrashings to the smaller country teams; one score of note was Manly-Warringah defeating Queensland Country 78-4. Added to that, the professional clubs began to resent the extra work load on their players the mid week fixtures required.

So the rugby league mid-week knockout cup is gone, which is ironic, as these days the rugby league play all their biggest games at night for higher TV ratings. Considering their track record so far, bringing a meaningless mid-week cup back would be right up the rugby league’s alley, so they can continue to worship their all-powerful god — money.

So back with soccer and the FFA cup match this week, which the Bentleigh Greens won 2-1. Adelaide went ahead in the 48th minute through Alex Rideout, however the Bentleigh side showed grit, equalising in the 88th minute through captain Wayne Wallace. It was Jamie De Abreu who knocked in the extra time winner in the 103rd minute.

The other quarter final winners were all A-League professional clubs — the Central Coast Mariners, Perth Glory and Adelaide United. The Greens will find out their semi-final opponent on Wednesday night.

Elsewhere in the world of soccer, I have been enjoying the women’s soccer on Sunday afternoon on the ABC. The pace of the game is slower than the men’s game. The W-League is relaxing to watch and, I might add, the grounds are not papered to the cracks with advertising for alcohol and fatty foods, which adds to the sense of peace. 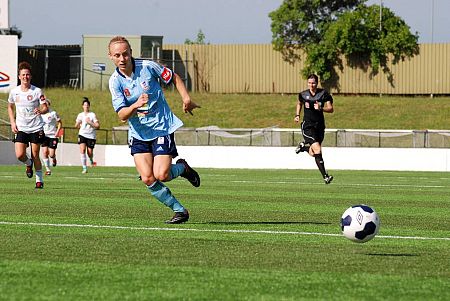 Sydney FC defender, Teigen Allen in action against the Wanderers at Endensor Park in western Sydney. (Image via bluemountainsgazette.com.au)

The standard is high though and this is reflected in the women’s national team, The Matildas, being ranked ten in the world. The top two are Germany and the USA and I did see some highlights of these two teams going at it — it was fearsome stuff. The pace of women’s soccer at the top tier is really quick and provides a genuine spectacle.

I watched last Sunday Sydney FC play their derby match against the Western Sydney Wanderers. The westerners won 2-1, going ahead in the 14th minute from the penalty spot through Keelin Winters. Sydney equalised in the second half courtesy of a quality strike by busy American forward Jasmyne Spencer. She had work to do to make space, she did it, then belted home a lance-like shot into the bottom corner.

A draw would have made me happy, as both teams deserved it, however there then came one of those moments that all defenders dread. Wanderers’ midfielder Cailtin Jarvie broke through and sent a cuttingly dangerous ball into the Sydney six-yard box. Sydney defender Teigen Allen was doing her job, she tracked back hard, but could not avoid the ball as it came across, hit her and careened into the net. It was a genuine shame, as Allen performed well all match in defence for the sky blues.

For the Test Cricket in Abu Dhabi, déjà vu is the descriptor, as Australia is doing badly (again). Pakistan won the first test by 221 runs with the Australian batting falling in a heap, twice.

In this second test, Pakistan won the toss and batted and finished the first day at 2-304. Younis Khan being not out 111, thereby equalling a record we don’t really want to hear about — being the first batsman since Englishman Herbert Sutcliffe in 1924/25 to score three centuries in a row against Australia.

Australia getting handed its arse by Pakistan in 2nd Test in Abu Dhabi http://t.co/O9EESaVS8i

The match is already well away from Australia, at stumps on day two we trailed by, gulp, 548 runs with nine first innings wickets available. Pakistan declared at 6/570, with Younis Khan converting his ton to a double — out for 213. Misbah-ul-Haq scored 101 and Azhar Ali contributed another, out for 109. Australia was 1/22 overnight, with David Warner 16 n.o. and nightwatchman, Nathan Lyon on 1.

At drinks, half-way through the first session on the third day, it is 2 for 70, after the only batsman who has been performing for Australia at the moment, David Warner, being dismissed after half-an-hour. Surprisingly, Lyon is still hanging in there, on 12. New addition to the team, exciting all-rounder Glenn Maxwell, is taking the fight to the Pakistanis, being 32 off just 25 balls.

The Aussies will be home soon, to play against India and (hopefully) perform better on some hard, grassy tracks in Australia.