AMA looks to hit alcohol advertising out of the park

A new summer of cricket has arrived — and that means endless alcohol and fast food advertising on Channel Nine, writes Lachlan Barker.

SUMMER IS UPON US and, for many of us, that means cricket.

But unfortunately there’s a sickness in cricket and Australia needs your help to fix it.

The problem with cricket is that it is another one of the sporting products that Channel Nine use to make lots of money — and a big chunk of this money comes from advertising alcohol, unhealthy foods and gambling. Test cricket goes all day – seven hours or more of viewing – and the broadcasts are infested with battering, ram-it-in-your-face, ads for these unhealthy products.

What’s more, due to a loophole in the FreeTV code of practice, alcohol can be advertised during children’s viewing times — as early as 9.30 in the morning. Thus, you have the utterly ludicrous situation of the viewer enjoying a late breakfast with the cricket on and have alcohol ads fill the screen while you are taking your second cup of coffee for the day.

I contacted the Australian Medical Association (AMA) and spoke with the vice president, Dr Stephen Parnis. Parnis is still hands on, when I phoned him he was in the chaos of an emergency room, so he took my number then called back later in the day — no desk bound doctor here.

I asked Dr Parnis to outline in general the AMA’s view toward alcohol advertising in sport, he began:

“Australia has long had a very unhealthy relationship with alcohol. The current levels of alcohol advertising are just the latest symptom of this.”

He then gave me some grave statistics outlining some of the effects of alcohol on our society.

The drinking age in Australia is 18, so a part of those were underage.

Dr Parnis then clarified the AMA position, his organisation are not out to be “wowsers” – they are not here to bring in a prohibition on alcohol – the AMA is simply targeting “unhealthy alcohol ingestion”.

As for saturation, this is an understatement if anything.

In my nerdly way, I did some stats as I watched the cricket last year and I can tell you that, on the day of my measurement, there were 100+ actual ads for alcohol — approximately 15 an hour. Furthermore, there were roughly the same number of ads for the unhealthy fatty chicken that was a co-sponsor of the broadcast.

Additional to that – and I can hardly believe I’m writing ‘additional’ – the ground and stands are plastered with further advertising material for alcohol, fatty foods and gambling. So even while there are no actual ‘ads’ on the screen, there is advertising on the screen. As a player runs to take a catch in the outfield, they pass a multitude of advertising hoardings, showing, among other products, alcohol, gambling and unhealthy food. 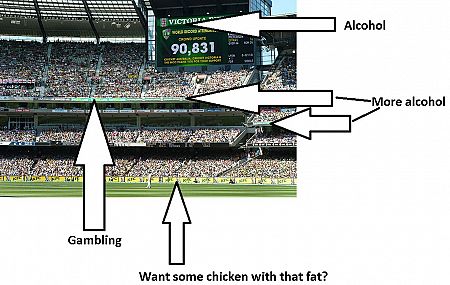 I did contact Channel Nine and spoke with the same media rep to whom I spoke last year.

Then I sent some questions/requests through: 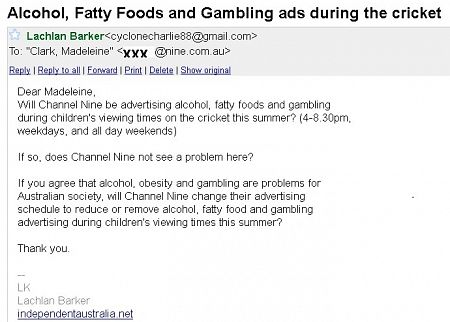 I’ve had no response.

Last year, Nine did reply to a similar email, saying:

I responded to that, asking:

‘Will you inform me when there is a comment?’

But then, as now, I received no response.

So what can you do? Two Facebook pages that are relevant are those for Cricket Australia and Channel Nine.

Cricket Australia is the body that oversees cricket and their sponsors. You can’t comment directly on the page, however you can send a message. 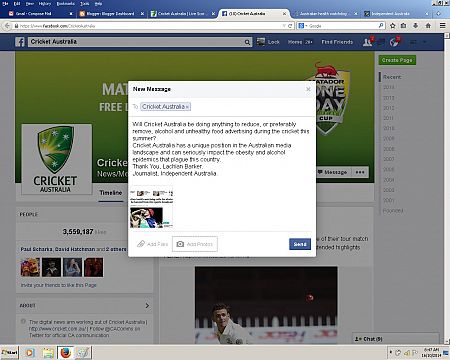 Also, here you can make a comment direct to the page.

However, once I posted it, it went to the ‘posts’ page, I clicked the ‘view posts’ link, but couldn’t find it. Presumably, the page admins will review it and then decide whether to show it publicly. I’m not holding my breath.

One million people a day watch the test cricket in Australia, so even if you don’t like sport, I request your involvement. You can add your voice to that of the AMA to see that one million Australians aren’t deluged with ads for alcohol, fatty food and gambling.

For the actual cricket, this summer Australia’s men will be playing India in four test matches, and South Africa and England in one day and Twenty-Twenty (T-20) matches. If you are a cricket fan, you can gain a measure of peace by listening to the excellent commentary on ABC radio, with your TV muted. The sound and pictures are out of sync, but the radio is first, so if something happens you can hear it first, then race into the TV room and watch it ‘live’.

Our female cricketers’ team is called the Southern Stars, and they will be playing one day fixtures against Pakistan and tests against the West Indies. These West Indies fixtures will also be broadcast by Nine – on their repeater station, Gem – so I will be tuning in for that — partly to watch, but also to compare the differences in advertising.

If you are unfamiliar with the Stars, probably the best known player is captain Meg Lanning, while Ellyse Perry is another name that may ring a bell. While the women’s cricket may not garner the viewers the male game does, I already suspect that I am going to find it more relaxing to watch, with destructive advertising much less to the fore.

Australian cricket team heads into first Test against Pakistan with doubts over spin and reverse swing http://t.co/Hvl03j8jGr via @smh