"Tampon tax" to stay: Despite a colourful and sustained media campaign that drew international notice, a 100,000 strong petition and a commitment from Federal Treasurer Joe Hockey, GST reform on tampons has been rejected by NSW and WA. Deputy editor Michelle Pini reports.

A MUCH reported anti "tampon tax" campaign, which managed to highlight the ridiculous inequity of a tax on essential hygiene items and capture worldwide attention, has failed to impress the NSW and WA State treasurers.

When Sydney University student Subeta Vimalarajah started a petition to stop the GST being applied to feminine sanitary products, she highlighted a little-known fiscal reality that affects ten million Australians every month. She also exposed the underlying patriarchal systems that allow the inequity to continue, pointing to institutionalised discrimination.

Dubbed the "tampon tax" and described by Subeta as “a tax on a bodily function”, this GST component is not applied to other personal hygiene items — men’s razors, lubricants, nicotine patches and condoms, are all classified as “essential”. Further, this tax currently nets State governments an estimated $25-30 million per year.

And then there’s the problem this further cost on an essential item adds to the burdens of people who are already living below the poverty line. Subeta explained:

"Half the population menstruates and they shouldn''t be financially penalised for it. I think the tax reflects how the concerns of people who menstruate are peripheral in government decision-making … [It’s] indicative of a broader inability for some politicians to understand other policies that concern this group." 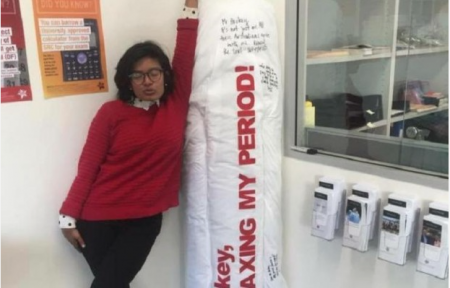 “It’s a bloody disgrace! It’s important because it is essentially a gender tax. It’s symbolic — women also earn less and are more likely to live below the poverty line, but in order to tackle the big issues we have to start with grass roots.”

The #stoptaxingmyperiod protest is about to begin at Parliament House. My thoughts on why it''s important. http://t.co/KEANbPr4V3

After a sustained campaign that began with a petition and with the help of the GetUp organisation, Subeta’s tampon tax crusade captured the public imagination to the tune of 100,000 signatures and created a social media frenzy.

Subeta followed up by posing with a giant tampon labelled, ‘Stop taxing my period’ and challenging Federal Treasurer Joe Hockey on the ABC’s Q&A program.

“Mr Hockey, do you think that sanitary products are an essential health good for half the population?”

This prompted agreement from the treasurer and a commitment that:

Not missing a beat, Subeta and friends danced on the grounds of Parliament House dressed as tampons the next day, to further drive the point home.

“ ... not something this government has a plan to do.”

Nonetheless, last month, a spokesperson for the Treasurer’s office confirmed with IA that Mr Hockey intended to honour his earlier comments on the Q&A program, by instructing Treasury to prepare costings and writing to the States. The spokesperson said,

“Mr Hockey agreed that a debate should be canvassed.”

However, after a gargantuan anti tampon-tax campaign effort that captured worldwide attention, the unpopular tax remains. Friday’s meeting of the treasurers, at which a unanimous consensus was required for GST change, saw the State treasurers of NSW and WA refuse to budge, clinging instead to the ongoing revenue from the discriminatory GST anomaly.

“The campaign is over, unfortunately, or at least my campaign.”

A Woman Is Posting Feminist Messages Written On Period Pads All Over Her City pic.twitter.com/16bTLkl7Fz