Using trees for carbon accounts looks good but it's a con

Governments in Canberra and Hobart have discovered that trees make their carbon accounts look good, but it’s a con, says Peter Boyer.

YOU WON'T believe this, but both the Tasmanian and national governments are into tree-hugging.

They mightn’t believe it either. I’ll explain.

Tasmania’s environment minister, Matthew Groom, told a Legislative Council estimates committee last June that the state’s carbon emissions had declined by 90 per cent since 1990, meaning its legislated 2050 target had been reached “several decades ahead of time”.

This is remarkable. We know that in this hydro-powered state, emissions from the main source of carbon pollution, cars and other transport, have stayed stubbornly high. So how did Tasmania achieve such a monumental turnaround?

Surprisingly, no Legislative Councillor asked the obvious question during Groom’s session, and Groom didn’t volunteer any information. He might have been embarrassed to admit that it happened because a depressed market forced Tasmania to keep its trees instead of logging them, as climate scientist John Hunter subsequently showed in an article in the Hobart Mercury newspaper. 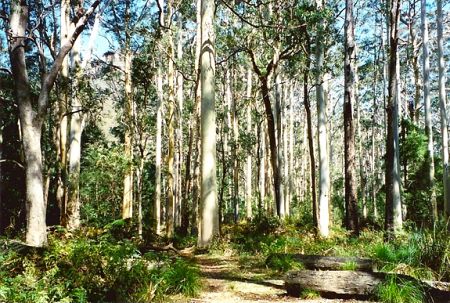 The other part of the story comes out of Canberra.

Federal environment minister, Greg Hunt, hailed the outlay of over $1.2 billion to buy 93 million tonnes of carbon dioxide abatement last year as a “stunning” success. Notably, 58 per cent of the claimed abatement went to long-term contracts to sequester carbon by growing trees.

Hunt also claimed many times during 2015 that Australia would “easily meet and beat” its 2020 emissions target of 5 per cent below 2000 levels. This despite conclusions by industry analysts RepuTex and Pitt & Sherry that fossil fuel emissions put us on track to fail in that modest quest.

When this analysis was put to Hunt at the National Press Club in November, he dismissed the questions, saying his position was based on “global gold standard” accounting rules. Like Groom, he didn’t offer an explanation.

@triplejHack But his crazy target is higher than emissions are now, so answer to #qt is NO

Both national and state policies are based on UN protocols allowing nations’ overall emissions accounts to include, among a range of land management mitigation measures, increased carbon take-up in trees and avoided emissions when land clearing is stopped.

“Avoided deforestation” programs have assumed that everyone with a clearing permit would always clear the full amount of land in question, which is frequently – perhaps commonly – not the case. The amount of abatement is thus exaggerated in the data —  a godsend for politicians wanting easy solutions.

There’s more. Scientists warn that while carbon emitted from plants, animals and soils contributes to global warming, the process is inherently different from releasing fossil carbon – carbon from coal, oil and natural gas – and must be treated differently.

Those differences were explained in a 2013 paper, “Untangling the confusion around land carbon science and climate change mitigation policy”, in the leading scientific journal Nature Climate Change.

The study, by seven senior scientists led by Australian biologist Brendan Mackey and including UK ecologist Colin Prentice and Australian atmospheric specialist Will Steffen, found the notion that fossil fuel emissions could be offset by carbon stored in trees and soils to be “scientifically flawed”.  According to the paper:

‘Avoiding emissions from land carbon stocks and refilling depleted stocks reduces atmospheric carbon dioxide concentration, but the maximum amount of this reduction is equivalent to only a small fraction of potential fossil fuel emissions.‘

The study concluded that even if by 2100 we miraculously restored tree cover to all land previously deforested by humans, all over the world, then atmospheric carbon dioxide would drop by no more than 70 parts per million, while projections for the same period showed that the burning of fossil fuels will cause carbon dioxide concentrations to rise by between 170 and 600 ppm.

‘For all practical purposes, fossil fuel carbon dioxide emission is irreversible’, the paper said, adding that the only way to mitigate climate change is to drop false assumptions that trees and other land carbon sinks can remedy the problem, and to ‘cut fossil fuel emissions deeply’.

This was not new science. The paper drew together strands of existing knowledge which are uncontested among scientists. They should be understood by anyone preparing abatement policies.

Gold standard accounting? No, this is escapism —  a phoney accounting system set up to avoid hard decisions about fossil fuels. Governments may enjoy “success” today, but we’ll all pay later.

This article was originally published on 12 January 2016 in SouthWind and is reproduced with Peter Boyer's permission.

After promise not to insult our intelligence, Turnbull “all bull” cooks the books on GHG emissions v. @LenoreTaylor https://t.co/qLluJuaMMj

​Want to get the facts on climate change? Subscribe to IA for just $5.