Barnaby Joyce's boasts about Murray-Darling water theft epitomise the Turnbull Government's apathy and policy ineptitude and would be comical were it not for its far-reaching ramifications, says Peter Boyer.

THE FUSS over dual citizenship is a reminder that no matter how many flags are behind MPs when they strut the national stage, the pomp is just an illusion.

They are simply human — no more, no less.

Another current reminder of that is Utopia, the aptly-named ABC television show about bureaucracy, directed by Rob Sitch and written by Sitch, Santo Cilauro and Tom Gleisner.

A great strength of this wonderful satire, now in its third season, is that it’s so close to reality. I know this because much of my career was spent in the public service, struggling with political and bureaucratic demands, and the public interest. They often seemed poles apart.

Take last week’s episode: 'Smart Cities'. "Smart cities" is an idea that crops up a lot in the debate about improving urban spaces and cutting carbon emissions. In the hands of Sitch et al, it’s more about empty ideas driven by the big egos of town planners, architects, bureaucrats and politicians.

The story is about a project ordered by the minister, six months earlier, to develop Australia’s freight network. Plans have been finished ready for a COAG meeting, thanks to the diligent work of agency head Tony Woodford (Sitch) and his thoroughly competent offsider Nat (Celia Pacquola).

But the project is derailed, so to speak, by a fickle infrastructure minister and Tony’s equally fickle manager returning from a long lunch with thought bubbles about smart cities.

The public servants I knew would all, I’m sure, identify closely with Utopia’s leadership dysfunction. Add to that an endless stream of meetings, consultations and procedures which, with the best of intentions, can defeat good thinking. Tony and Nat have a lot to put up with.

To a point, this is to be expected of democratic government, where bureaucracy and politics have always made an awkward marriage. But it’s more serious when public servants charged with implementing agreed – and often legislated – measures come up against resistance from above.

That resistance can have massive consequences.

Australia’s well-being is largely defined by the health of the Murray-Darling Basin, our pre-eminent river system, draining more than a million square kilometres in five jurisdictions. Over many decades, its lower reaches – denied water by rising irrigation demands upstream – have been slowly dying.

The Murray-Darling Basin Plan seeks to ensure adequate “environmental flow” right down to the Murray mouth in South Australia. Set in motion under John Howard and finally implemented under Julia Gillard, it has bipartisan support, which should ensure its success. Right?

The ABC’s Four Corners program revealed last week that some cotton growers had taken billions of litres of water they weren’t entitled to. More disturbing: a top-level NSW bureaucrat seemed to be in on the water heist and the State Government ignored a report by its own compliance officers that comprehensively detailed the unmetered removal of water from the system.

Deputy PM and Federal Water Minister Barnaby Joyce was silent for a day or two — until a video from a Shepparton pub showed him proudly boasting that he had:

“ ... taken water and put it back into agriculture, so we can look after you and make sure we don’t have the greenies running the show.”

Joyce said last year he likes nothing better than seeing “big, yellow things pushing dirt around. It is marvellous. It gives a sense of opportunity … of hope.” It’s a fair assumption that, in his eyes, a big cotton dam holding Murray-Darling water wins hands down over environmental flows.

He’s not alone there. As Utopia shows, big, highly-visible infrastructure is political campaign gold, whereas environmental flows are like watching grass grow. Bor-ing!

So it is with policy on human-induced climate change. Governments around Australia and the world have given their bureaucrats the task of keeping political leaders informed about climate science and carbon emissions so that workable plans can be made.

So far, so good. But Utopia shows that the most crucial information or plans suddenly lose their importance if a government doesn’t want to hear about them.

Environment Minister Josh Frydenberg, like Greg Hunt before him, has been regularly advised by his department that emissions from Australian transport and power generation have risen by a big amount. By last December, they were between 40 and 60 per cent higher than in 1990. 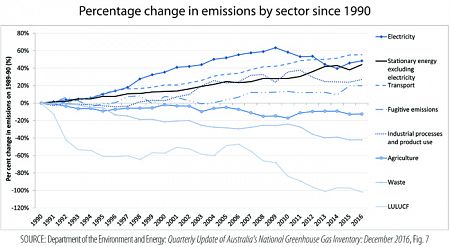 That’s the complete opposite of the impression given by both ministers about “meeting and beating” targets. Following the practice of his predecessor in quietly releasing this information just before Christmas last year, Frydenberg avoided any mention of those rising emissions.

It’s not hard to see why. Bad emissions data would make renewable systems and big batteries seem like a good idea, and would have done nothing for the Government’s argument for exploiting Galilee Basin coal and spending $1 billion on a mine-to-port railway.

Both the Turnbull Government’s emission-cutting measures and the Murray-Darling water theft clearly represent policy failures with ramifications extending far into the future. No objective evaluation would find otherwise, yet our political masters seem oblivious of that fact.

I’m sure some viewers laugh out loud at Utopia’s wit and wisdom. I just smile, because however outrageous the behaviour dreamed up by Sitch and his fellow writers, real life is more so.

This article was originally published in South Wind and is reproduced with permission. You can follow Peter Boyer on Twitter @PeterBoyer8.