Mystery explained: Hunt's award handed out by the oil industry

The nation's satirists stormed Twitter this week crying mass unemployment over the shock announcement of Greggie Hunt's global gong. But Lachlan Barker was on to it. No mystery. Hunt’s award was handed out by the oil industry.

MANY THIS week, myself definitely included, were gobsmacked by Greg Hunt receiving an award for – get your sick bags ready everyone – "Best Minister in the World".

When I first saw this, again like so many of you, I thought it was satire, perhaps done by that excellent SBS site The Backburner.

I’ve repeatedly been taken in by this site, so plausible are their funny stories and so appalling is our federal government.

But no, when we all got off the floor, the stories were indeed real and Hunt had, indeed, been given this award.

However, I knew there was something rotten here and so I thought I better find out how this bizarre occurrence came about. So I went to the site of the organisation that gave out the award, the World Government Summit.

There on the home page is a link to "Partners", so I clicked on that and discovered that the intriguingly entitled ‘Entrepreneurship Partner’ is the Abraaj Group.

So I clicked on that and we come to the Abraaj page and discover their portfolio.

Among them are such heartwarming industries as Chemicals, Metals and Industrials, Pharmaceuticals, Construction and Manufacturing and of course Energy, Mining and Utilities.

So here is a list of the companies involved in their 'Energy, Mining and Utilities' section. The black writing below each company is my labeling taken from the description on the Abraaj website. 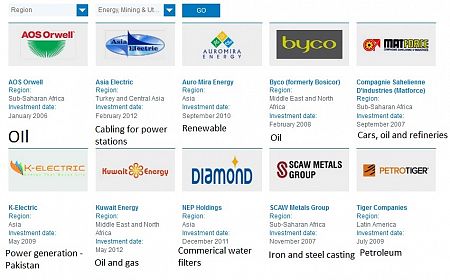 One company, Auro Mira Energy is focussed on renewables; they pursue hydro and biomass power generation in India.

However, the rest is largely fossil fuels.

Note well: the list is two pages long, and went I clicked to the second page, there is only one company there, Viking, from Turkey, and what do they do?

Viking are involved in:

Which sounds remarkably like CSG and fracking to me.

So there you have it mystery solved, Greg Hunt’s award was sponsored in large part by the energy industry, most prominently oil.

Once I found this out, it kind of made Hunt’s award make sense.

The award was for "Best Minister in the World" and so if you are going to pick a minister who does more than any other to enable the continued and increased use of fossil fuels, then clearly Greg Hunt is your man. Even then, I can’t help wondering if the people who gave Hunt this award are unaware that Hunt is actually Australia’s environment minister.

Perhaps they really think he is Australia’s resources and energy minister — the role currently filled by the egregious Josh Frydenberg, who took over from the previous risible incumbent, Ian Macfarlane.

Now, if an energy cartel want to give an award for the minister who has done most for them, then indeed Hunt, Frydenberg or Macfarlane are top picks.

But even then, this shambolic mess – the World Government Summit – was also sponsored by Thomson Reuters. I rely on Reuters news service and Platts, in the main, for information for my commodities articles, so at first I was aghast, planning never to use Reuters again.

But just as I had submitted this article to the editors here at IA, this story came through from the Guardian, headlined:

The story reminded us that Thomson Reuters is a separate entity from the Reuters news wire service and it was Thomson Reuters solely who administered the award, the news arm of Reuters saying:

So that lets Reuters news off the hook, however the Guardian story also says this:

‘Thomson Reuters promised a full clarifying statement, but has not yet issued one.’

This I found intriguing beyond measure.

If they are going to issue a clarifying statement, what are they clarifying? Perhaps they will clarify how one of the worst and most destructive environment ministers on Earth received this award.

What should really happen is that the award be revoked. If Thomson Reuters does not revoke this award, then I can conjecture with some degree of certainty it will be the last one ever handed out.

It is already – certainly here in Australia – being treated with the sort of justifiable derisory scorn that will make the award a laughing stock for ever more.

So Thomson Reuters would surely know that in the opinion of most Australians:

He has overseen the repeal of the carbon tax, leading to Australia’s CO2 emissions increasing for the first time in a decade. Included releasing the most recent figures on Xmas eve, in the hope no one would notice in the holiday rush.

He has overseen a cut in the renewable energy target, the removal of the Climate Commission and has three other key climate institutions still in his sights.

He has overseen repeated approvals for the Adani mine and port complex in Queensland, which will lead to immediate and far reaching deleterious effects on the magical and wondrous Barrier Reef.

This award is a corporate sponsorship. It has nothing to do with good government.

But Greg Hunt is the best at enabling ongoing and increasing use of fossil fuels, against all financial and global ecological sense. So they can give him an award, as long as it’s for "Most Destructive Environment Minister the Earth has ever Known".

Want to get the facts on the COAL-ition? Subscribe to IA for just $5.