ACCC gas report is nothing more than LNP propaganda

Has another government-funded entity, the ACCC, fallen victim to the Abbott/Turnbull Government's bullying and in a similar abusive relationship to the ABC and CSIRO? Lachlan Barker investigates its propaganda-ridden report into the east coast gas market.

IN APRIL this year, the Australian Competition and Consumer Commission (ACCC) released a report into the east coast gas market, and those who read it were aghast to discover that the ACCC are now simply printing the Turnbull Government's gas propaganda.

The report concludes that the answer to any shortages of gas for Australian industry on the east coast is – surprise, surprise – lift any moratoriums on gas exploration in the eastern states, then to explore for, then produce, more coal seam gas (CSG).

So sad to see the ACCC agree to do this and, thus, I’m sorry to report that we – the Australian consumer – can no longer trust the ACCC 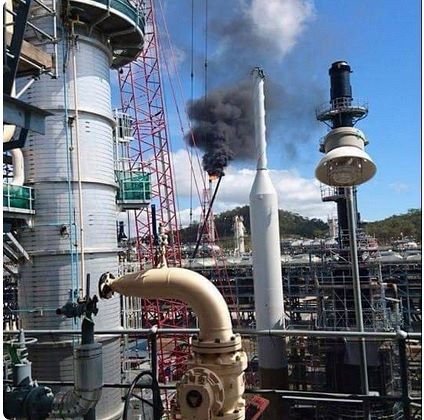 Smoke from flaring from an LNG plant, Gladstone. The machinery in the foreground underscores the multi-billion $ construction costs. Source: Anna Kia via Twitter..

This is the latest in a long sad line of destruction of venerable institutions by the Abbott Government now supported by the Turnbull Government. The line most famously started with the Climate Commission, dismantled as soon as practically able, by Tony Abbott in 2013.

Then the Commonwealth Scientific and Industrial Research Organisation (CSIRO) came under the hammer and began their path toward being an institution that the Australian voter cannot trust.

I demonstrated this lack of independence from the CSIRO on gas in this recent article in IA. The headline from Renew Economy says it all really: ‘CSIRO buries its futures forecast in fossil fuel technologies’ or as IA titled it when republishing the piece: ‘CSIRO’s new report on #innovation focuses squarely on DICE-y coal technology’.

Also to suffer at the hands of the Turnbull government are: Australian Securities and Investments Commission (ASIC), Australian Tax Office (ATO), Fair Work Ombudsman, the Fair Work Commission and the Australian Bureau of Statistics (ABS) as The Australia Institute's report, 'Corporate Malfeasance in Australia', highlights.

Added to which, of course, is the non-stop bullying of the ABC, one of Australia’s few trusted and genuinely independent broadcasters.

The ABC is like a victim trapped in an abusive relationship – with the government | Josh Bornstein https://t.co/fqZOvJs4PZ

It has now become a crystal clear tactic from the Federal LNP Government, if the Australian people are getting independent information that is counter to the LNP’s agenda, shut the organisation down or bully it into submission, then silence it. Or better yet, force them to release “independent data” that suits the LNP’s agenda.

#ABC Management now has Questions to Answer on why it sacked #NBN critic Nick Ross https://t.co/XlabHNLO1t via @FinancialReview #auspol

So that’s the general, now to return to the specific: gas.

The essence of the LNP/ACCC report is that with the three LNG plants now operating at Gladstone in Queensland, Australia needs more CSG to provide enough gas for these plants and also to provide gas for domestic industry and home.

So, according to the LNP/ACCC, we need to explore for and produce more CSG to provide for these twin loads.

However, this is fundamentally flawed for many reasons but the most obvious is that not all three LNG plants at Gladstone can survive.

The Asian LNG market is chronically over supplied, best highlighted by analyst Bruce Robertson’s report on the North East Gas Interconnector (NEGI), a gas pipeline from the Northern Territory to Queensland.

In that report, Robertson says:

‘The global LNG market is currently oversupplied, with 245Mt sold in 2015 compared to global liquefaction capacity of 308Mt. That surplus is at 26% and rising. Indeed, the global LNG industry is in a demand crisis that is particularly acute in North Asian markets critical to Australia. Demand for LNG from Australia’s three largest markets—Japan, Korea and China—declined in aggregate over 2015.’

With currently 60 odd million tonnes of LNG in Asia surplus to requirements and demand from Japan, Korea and China contracting, customers are already seeking to renegotiate their contracts with producers for lower prices and more flexibility, as this Bloomberg story highlights.

Currently all three LNG plants are hanging on by the skin of their teeth, hoping they can survive through until the price of LNG in Asia goes back up to a profitable level.

However, with the market oversupplied and more LNG coming online, this oversupply will only get worse. The price of any product in an oversupplied market will never go up.

Since the onshore CSG-to-LNG projects in Queensland are among the highest cost gas projects on Earth, then it seems the very essence of a pipe dream that all three will survive.

Origin has already begun the process by contracting Macquarie Capital to start looking at the selling their APLNG plant and the Queensland gas fields that feed it.

However, no one will buy this plant, due to the ancient rules of the market place. If the plant was profitable, then Origin wouldn’t be selling it, conversely, if it is offered for sale, any possible buyer – being the gas industry – will know it is not profitable.

Santos, likewise, is in big trouble. Their GLNG plant is also exporting gas at a loss and Santos is carrying $6.5 billion dollars of debt.

There is some talk of buyers for the Santos operations but if anyone does buy Santos, it is more likely that they only want the crown jewels — Santos’s PNG operations, which are, at least, low cost.

So some raider may buy up Santos, then mothball the GLNG plant and simply extract profit from PNG.

Either way, with Origin’s and Santos’s plants to go out of action, that releases approx 800 PJ (more than the entire Australian domestic gas demand) back into the market place which can now be used to protect jobs in Australia. 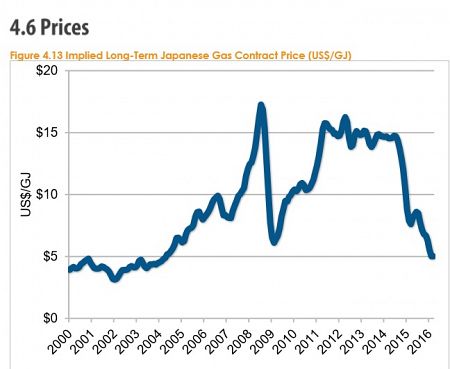 Thus, there is simply no need for any new gas projects in Australia.

The Greens have made the best move calling for a ban on all new CSG projects in Queensland.

Federal Labor has also made a good move on the topic of gas. Labor has announced that, if elected, they will institute a national interest test upon any new gas project, to determine viability and whether, indeed, it is the national interest — not just the interests of shareholders of gas companies.

This is eminently reasonable and, if it had been applied to the LNG plants at Gladstone, would have shown that these plants were simply there to provide profit for a small number of shareholders, while making it difficult for Australian manufacturers to secure long term gas supply at a reasonable price.

So, at the end of the day, what we know is that there is no need for Australia to start any new projects to mine more CSG as the main market for this gas – Asia – is already over supplied and the oversupply percentage is rising.

With the market chronically oversupplied, one or more LNG plants at Gladstone will close or be mothballed and thus the current levels of gas production in Australia are more than adequate.

As well, sadly, we learn that the ACCC, like the CSIRO and ABC, is now another government-funded body in an abusive relationship with the LNP. It is simply producing LNP propaganda and that’s the most disappointing thing of all.

Excellent response by @Phil_Laird1 from @LockTheGate to the ACCC Gas Supply Report which gave zero consideration of the true costs of CSG.