A NEW report from the CSIRO mapping Australia’s innovation and investment priorities out to 2030 has put its energy focus squarely on fossil fuel exports and the technologies required to best exploit them, under a number of different possible future scenarios.

The report, published on Tuesday to mark the launch of the CSIRO’s new business advisory service, appears to put Australia’s premier science and research organisation in lock-step with the Coalition Government, whose stated preference is to keep the national economy firmly tethered to coal and gas, despite the global trend – and scientific mandate – for rapid decarbonisation.

And, like the Coalition’s 2015 Energy White Paper and recent Budget, the 66-page report barely mentions climate change, ignores 2°C emissions scenarios and gives scant mention to the numerous renewable energy technologies many consider will be a key ingredient of the global effort to avert dangerous climate change — something the CSIRO’s own Cape Grim Baseline Air Pollution Station has now confirmed we are not doing nearly fast enough.

It also appears to reflect the new corporate direction the CSIRO has taken under the leadership of former U.S. venture capitalist Larry Marshall, which has so far included the sloughing off of as many as 110 of the organisation’s world-leading climate researchers.

The CSIRO report, Australia 2030, is based around four 'plausible and divergent scenarios', each based on different combinations of social, economic, environmental and technological drivers, and each designed to be 'purposely extreme', to provide a sharp contrast between different potential futures and illustrate the trade-offs involved for the five major sectors of Australian business and industry: food and agriculture, healthcare and pharmaceuticals, manufacturing, mining and METS, and 'oil, gas and energy'.

The scenarios include Digital DNA – where we see a dramatic shift towards digital services driven by the “internet of things” (see table below); "Mining and Dining" – effectively a business as usual scenario, where a second wave of the resources boom underpins Australia’s economy; and "Clean and Lean" — where economic growth is decoupled from the environment, and countries can successfully pursue both objectives.

The final scenario, called "Weathering the Storm", pictures a world where geopolitical instability has increased, driven by climate change and regional conflicts over access to land, food and water — all of which leads to prolonged global economic stagnation.

Under this latter, nightmarish, scenario – something that may well emerge given the slow pace of decarbonisation and the rapid changes in climate – the report heralds an energy future for Australia that still revolves around fossil fuels.

With volatility and uncertainty surrounding most industries, the energy market relies on tried and tested energy sources such as coal rather than further developing the potential of renewables'

High oil and gas prices coupled with regional conflicts in oil supplying areas like the Middle East has also increased the attractiveness of coal.

These conditions, the report says, will mean that:

'... technologies that allow coal to replace oil or gas as a fuel will facilitate heightened demand for Australian coal.'

An example of one such technology offered in the report is a direct injection carbon engine — an adapted diesel engine that converts coal into a water-based slurry that maximises electricity generation and extends the life of the engine.

Interestingly, things don’t pan out too differently for Australia in the "Mining and Dining" scenario, except that the energy and technology focus shifts a little in favour of gas.

While coal is still an important export for Australia, it is LNG that is the largest export market, with higher oil and gas prices making unconventional gas economically viable.

'To meet the demands of this booming resources sector, businesses and governments have invested heavily in infrastructure and efficiency gaining technology. Noting the increase in global demand, low-cost international producers enter the market to capture some of the growth, but are not large enough (or efficient enough) to heavily impact Australia’s comparative advantage of being rich in resources and knowledge.'

The Clean and Lean scenario, which acknowledges a focus on 'services and technologies related to renewable energy integration and storage' spotlights clean coal technology as a 'potential enabler'.

With high abatement and a global push towards environmentally-friendly operations, Carbon Capturen and Storage (CCS) has the market conditions required to become economically viable.

Other countries, like India, may still use coal-fired power in 2030, but have firm plans to halt all imports of thermal coal within two or three years.

And Australia, according to the Climate Institute, will need to rid itself of coal power generation completely by 2035 if it has any hope of meeting its obligations under the Paris Climate Agreement.

On a more realistic level, the broader 2030 outlook under the Clean and Lean scenario appears to be fairly grim, with Australia forecast to come in under the “lean” side of the equation. 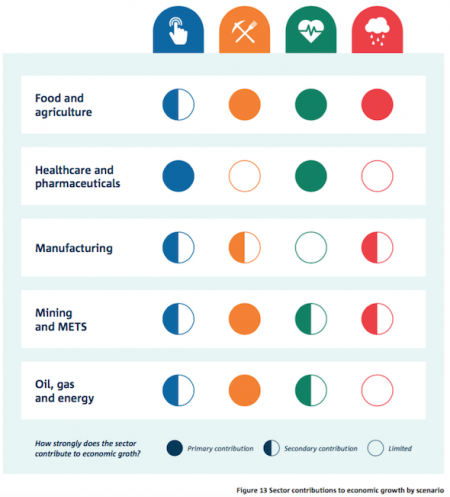 Sector contributions to economic growth by scenario, from L to R: Digital DNA, Mine and Dine, Clean and Lean, Weathering the Storm

The report goes on to say:

While the significant changes in the business environment increase efficiencies and reduce costs associated with wastage in the long- term, many small businesses in capital intensive industries are unable to afford the initial investment in new equipment, processes and systems, and are forced to close down.

Of those that survive, some are further stifled through over-regulation. Larger businesses are only now beginning to offset their earlier ‘green’ investments, with a projected period of strong economic growth on the short-term horizon and the long-term possibility of Australia becoming a carbon credit exporter.

This story was originally published in RenewEconomy on 17 May 2016 under the title 'CSIRO buries its futures forecast in fossil fuel technologies' and has been republished with permission.

Don't be fooled by the fossil-fuel funded COAL-ition.Subscribe to IA for just $5.