Recent events in the United States, Australia and the United Kingdom have heightened the urgency of the community campaign to reduce the damaging influence of News Corp's misreporting.

Observers of the coronavirus pandemic are dismayed at the soaring rates of infections and deaths in the USA when well-managed countries have this under control. At the forefront of disseminating the false information is the Murdoch media and particularly Fox News.

In an interview with President Donald Trump on Fox last Thursday (9 July), presenter Sean Hannity – like many other News Corp presenters – not only refused to refute or even query the President’s blatant lies but amplified them and added a few of his own.

These statements are the opposite of the truth. They encourage complacency and thwart efforts to get the U.S. Administration to change course.

Dr Fauci retains the respect of most American medical authorities and of the global community. Trump does not. The mistakes that cost so many lives needlessly were not made by Dr Fauci.

The travel bans the U.S. Federal Administration imposed were too little, too haphazard and too late. Quarantining and contact tracing were grossly inadequate.

The USA conducted 41.8 million tests up to last Saturday, 11 July. China has conducted 90.4 million. Tests per million in the U.S. to Saturday were just 126,171. That’s more than many countries, but fewer than Portugal, Russia, the United Kingdom, Israel and another ten or so major countries. (Data, updated daily, is from Worldometers.)

Some infected people show light symptoms and recover, others show no symptoms at all, while others become extremely ill and die. The long term effects remain unknown.

U.S. deaths among the world’s highest

With our wealth of Covid-19 data, we can track the success of effective governments and the harm caused by the inept decisions of others.

The UNDP lists 52 major countries (above one million population) as very highly developed. All were impacted by the coronavirus. All except Taiwan have had more than 160 people per million infected and all except Taiwan, Malaysia and Hong Kong have had deaths per million above four.

Each was confronted with similar challenges and forced to act. Most accepted the science, told the truth, set party politics aside, collaborated internationally and eventually controlled the spread and the mortality. But not all.

Of those 52 countries, 40 have had fewer than 100 deaths in July so far (to 11 July), with 21 of them having fewer than ten. The stand-out successes are New Zealand, Latvia, Singapore, Taiwan, Slovakia and Slovenia with none. Malaysia, Greece, Austria, Finland and Lithuania have had just the one death. Norway has had two and Uruguay and Australia three.

At the other end of the spectrum is a country whose federal government denied the science, lied to its people, made this a political issue, blamed other countries and repudiated the World Health Organisation.

Of the 52 countries, 17 are large nations with populations above 20 million. This chart shows deaths per million inhabitants for those nations in July. This reveals graphically which governments are succeeding right now and which aren’t. 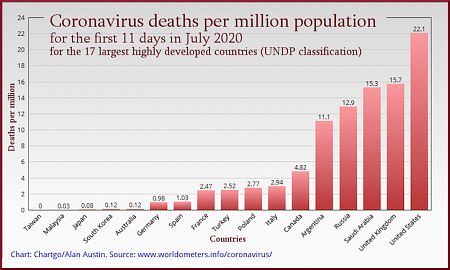 Is it a coincidence the two worst scenarios have occurred in countries where News Corp has extensive reach?

In its long tradition of attacking prominent Australians, News Corp attacked Geoffrey Rush in November 2017. It ran a highly damaging front-page story in the Daily Telegraph falsely accusing the actor of sexual impropriety, complete with creepy photo and the headline 'King Leer'. This was followed by further, equally damaging false “stories”.

“I accept Mr Rush’s contention that the conduct of Nationwide [a News Corp subsidiary] ... was, in all the circumstances, unjustified and improper because they were reckless as to the truth or falsity of the defamatory imputations conveyed by the articles and had failed to make adequate inquiries before publication.”

The Federal Court has just dismissed an appeal by News Corp and confirmed the $2.9 million damages payout as correct. This will not, however, undo the harm done to News Corp’s chosen victim.

This article focuses on just two instances of News Corp’s irresponsible conduct. There are others, including the continuing hypocritical attacks on Victorian Premier Dan Andrews, as discussed here and here by colleague, John Wren.

There is little chance the corporation will change. So it is up to the citizens to make it disappear.