Rhetoric from conservative politicians and media has caused Victorians to let their guards down, leading to a rise in COVID-19 cases, writes John Wren.

I WRITE THIS WEEK’S column in locked-down Melbourne. Since the second lockdown was announced, Murdoch’s media and state Liberal politicians – Tim Smith, Michael O’Brien and Georgie Crozier, in particular – have gone apoplectic. Everything is Premier Dan Andrews’ fault.

To Andrews’ credit, he has just gone about his work, making the tough decisions and giving openly honest and frank press conferences. He openly stated he considers the Opposition irrelevant under the circumstances and so just ignores them, which, of course, means these fools become even more strident in their calls.

There is a real noticeable gap between what is being printed and said about Andrews in the media and the attitudes of most Victorians. Through the course of my work and after-hours activities, I speak to dozens of Victorians from all walks of life daily — tradies, business people, CEOs, health care workers, small business owners, mums and dads, the elderly, young adults, university students. Almost every one of them appreciates what Andrews and his team have been doing during the pandemic. Almost all are appalled at what is being said about him. They see the look on his face, the noticeable fatigue and don’t envy him his job.

But let’s look at a few hard-cold facts.

The conservative media has been using war metaphors to describe the fight against COVID-19. The headlines routinely scream “winning the war against the virus” or similar, however, that’s where the wartime relationship ends. When Australians have been involved in real shooting wars, where our own national survival is at stake – WW1 and WW2, for example – all Australians of all political leanings suspended hostilities and worked together for the common good.

In both World Wars, the PM of the day convened a national war cabinet composed of members of all parties. The media fell in behind. In fact, if an individual dared to criticise the actions of a political leader in wartime, it would have been considered a treasonous act.

At the start of the pandemic, Prime Minister Scott Morrison adopted this attitude, at least publicly anyway. He convened his National (war) Cabinet, but as the weeks wore on, his mask slipped and he became more and more strident in his calls for restrictions to be lifted, borders open and schools to return to normal. His rhetoric undermined Public Health messaging for chief health officers and political leaders like Andrews.

Murdoch’s media has also been vocal in its demands to lift restrictions. The conservative side of politics sees the viability of businesses as being more important the people’s lives. We read constantly and still do that the virus is less damaging than the common flu. Murdoch’s Andrew Bolt was even doing it this week, claiming it was all a massive overreaction and that somehow Andrews is on some sort of dictatorial power kick.

The constant media onslaught and similar messaging from conservative politicians meant that many Victorians became complacent. The warnings were not taken seriously, hand sanitisation slackened off, social distancing was ignored and, as a result, we now have a resurgence of the virus in Melbourne. Our media diversity has been decimated and the only media many see or read is Murdoch’s Herald Sun and when they get home from work they switch on Murdoch’s Sky News, Kerry Stokes’s Channel 7 or Peter Costello's Channel 9 news and get the same tripe rammed down their throats again.

They think they are getting multiple news angles, but they are really just getting the same angle with different presenters.

In Victoria, with this near-constant undermining of health messaging, it was only a matter of time before the virus re-emerged.

But why haven’t we seen the same resurgence in Sydney?

In Victoria, the Liberal Opposition has been grossly irresponsible. At every point for months, they have chosen to use the pandemic to score political points, to attacks Dan Andrews. Remember when Morrison said, “we are all in this together”? That did not apply in Melbourne.

From almost the start of the first lockdown, Tim Smith and others were demanding that restrictions be eased and when Andrews refused, he was called a "dictator". Victorian Opposition Leader Michael O’Brien even allegedly said that “we should let the virus rip”. It should be noted that countries who did that, Sweden and the UK for example, now soundly regret those decisions.

In NSW, the Labor Opposition has been comparatively responsible and although Premier Gladys Berejiklian’s performance has been far from perfect, they have not sought to politicise the virus or undermine the public health messaging.

Which brings me back to wartime metaphors. Imagine if Tim Smith was opposition leader in WW2 — he would have been criticising the PM for the money spent defending Australia. O‘Brien would have been saying “just let the Japanese in and let the cards fall where they may”. Both would have been shot for treason. 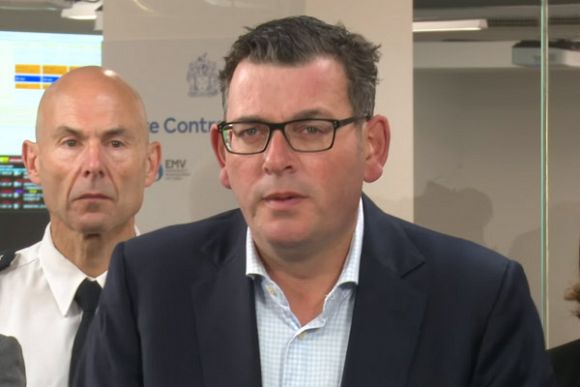 Victorian Premier Daniel Andrews has been defying pressure from Scott Morrison to comply with his desire to see schools reopen.

Australia’s legal definition of treason, of course, does not apply to the pandemic situation, but we are in a similar battle for the lives of Australians. Political rhetoric that undermines public health messaging is not just irresponsible, it recklessly endangers people's lives in much the same way that traitors do in wartime.

To persist with the wartime metaphor in times of conflict-free speech is normally curtailed on the grounds of national security. I am a great defender of free speech, but if the mainstream media – particularly its opinion influencers like Andrew Bolt and Alan Jones – and conservative MPs continue to put lives in danger with their ill-informed statements, a legal remedy is required. Perhaps its time to enact emergency pandemic legislation that prohibits messaging undermining public health guidelines.

So, who is to blame for the second Melbourne lockdown? Dan Andrews? Amorous security guards? Complacent citizenry? Complacent citizenry, definitely, but why were they complacent? The root cause is the ongoing undermining of public health messaging by public figures, the media and a number of conservative politicians.

This is the lockdown we should not have needed to have. Months ago, when Tim Smith, Michael O’Brien and others were demanding that restrictions be lifted, they were told it would lead to a so-called second wave. Now they’ve got their end result. They should remember that when one points a finger, there are three pointing back at themselves.

Thanks, Tim. Thanks, Mike. Show yourselves out.