The fat cat is out of the bag: Time to reform the whole banking system

With daily Royal Commission revelations, Dr Lee Duffield says the cat is out of the bag about how Big Money has been running their institutions. He says this week's massive attention on the Commonwealth Bank and AMP might also stir up demands for real reform of a financial system that started compromising itself after they brought in privatisation and deregulation. 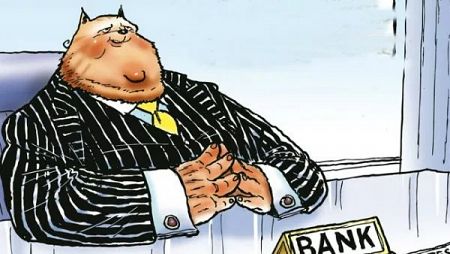 IT LEAKED into some of the reporting on this week’s session at the Royal Commission into Misconduct in the Banking, Superannuation and Financial Services Industry, that AMP was a “venerable” Australian institution with a 170-year tradition.

That was mainly a case of reporters not bothering to know history and how to read it, trying a line that everybody should be "shocked" by bad behaviour on the part of this old lady.

CHECKING THE BANKING BACK STORY

Sometimes telling the background on how we got to where we are helps to give the full story — which includes telling why.

A reminder is in order that the old Australian Mutual Provident Society (AMP) “de-mutualised” in the late 1990s, opening a chasm between the people’s institution that it was, and the nasty thing it is right now — up the creek because of rapacious practices against its customers that have edged it towards the zone of jail-time for key perpetrators.

Much of the same can be said of the Commonwealth Bank.

It was a people’s bank, owned by everybody through their government.

It gave first home buyers and others a chance in times when credit would be rationed for a social purpose like affordable family homes.

Now it is run for wealthy investors, bottom-line driven, one of the most on-the-nose institutions in the country — a leader in the pack of tarnished stars coming out of the current public investigation before a Commissioner.

The two stories have become a parable of excessive “privatisation” and moral rot setting in across many sectors.

For a century, the AMP was a major financial institution in a country with plenty of developed resources but not vast wealth — certainly not wealth available for most citizens to play with.

It operated on the model of a mutual society, owned by its insurance policy holders, who pooled and invested their small contributions.

It is folklore that, in some households, the “AMP man” would be around each Thursday to collect his half crown (25 cents, maybe $10 today).

You can hear them roaring with scornful laughter at that in the offices of AMP today (comic relief for them in a bad week), in Treasury, sundry halls of commerce, even parts of the Labor Party – but the laughter will be getting edgy, some faux rire, doubt creeping in.

With revelations like these, why did Malcolm Turnbull fight a Banking Royal Commission for so long? #auspol #BankingRC pic.twitter.com/KNEPPrG3D0

Especially for its times, the AMP was a powerful institution, its headquarters skyscraper symbolically dominating the business district off Sydney’s Circular Quay.

Its employees were in for the long term, not so commission driven, getting fair wages by having an in-house union — they even had a staff canteen which members of the outside public liked to get access to at lunch.

The message here is that it was a major player in the financial world, though it had a general public base and was far from what it became.

Caught up in the drive for privatisation, and the money explosion of the 1970s and '80s, it paid out its members with shares, which most proceeded to sell, immediately or by stages — at one time pressured to sell during a merger, providing tasty buys for professional private investor groups of different kinds.

The company signalled its expansionist intentions with, amongst other such failures, the disastrous takeover of insurance provider GIO, then settled into a pattern of aggressive canvassing for clients as a major seller of financial advice — advice paid for but not always delivered, it turns out.

Large shareholders might get a good look-in there, share speculators even better, customers – well not so much.

As for the “old AMP”, in scale, business model, culture and mission, it was as far away as the black stump.

There is no 170-year tradition at that company and the fact they have come a gutser at the Royal Commission this week should be no surprise to anybody.

As for the Commonwealth Bank, it was not set up as just another take-no-prisoners player hitting hard for the bottom line — that would have to wait 80 years for the privatisation.

It started life in 1911 under its own Act of Parliament, as a government-owned general bank with the crucial advantage and security of a Federal Government guarantee, going on to take up functions of a central bank, including issuing currency.

In the 1980s, with the heating-up of world business activity, accompanied by a persistent and cocky financial ideology, even centre-left governments across the English-speaking world decided not to be left behind.

The Hawke Labor Government sold the Bank in 1991, thinking the proceeds would be good revenue for good causes, and supposing that it would assist the growth of the economy and provide benefits all round.

The bank had been founded by the Fisher Labor Government, so maybe it was considered to be Labor’s to give and then take away.

In 2018, hardly a week goes by without somebody in the Liberal Party getting up to praise then Labor Treasurer Paul Keating for “freeing-up” Australia, as they used to say in those heady eighties days.

The “old” Commonwealth Bank was quaint, like AMP, when it also was a formidable financial institution in a growing, but as yet modestly-sized, economy.

For example, as an agency for teaching children how to save; they’d distribute the famous money boxes that looked like a bank, and also deposits could be made at school where the teacher would collect and issue receipts in class — on the bank’s behalf.

At a crucial stage in the 1980s, during the long run of high inflation, commercial mortgage rates got up to 18.5%; banks, as a requirement of government, fixed a ceiling of 13.5% for existing home borrowers — key relief in the marketplace, no sign of the mass defaults and seizures we are bracing for in 2019.

MODERNISING AND PRIVATISING — WINNERS AND LOSERS

As its official history reports, the Commonwealth had been modernised as a public corporation after 1960, producing a big range of new services — but any such success caused resentment among commercial competitors, prospective investors, of course, and ideologues of the right.

'... a private organisation devoted to maximising returns to its shareholders and managers, and free of any social or community obligations.'

The sale to private bidders saw a process the same as for AMP, with small investors jostling against big ones for the 850 million shares put on offer in the first of three sales.

Step by step, those small folks would sell out.

COSTS OF PRIVATISING AND DEREGULATING

Quiggin calculated a loss of $3.5 billion to the public, based on missing its share of on-going profitability up to 1993.

That profitability would grow more due to 'removal of restrictions on the monopoly power of the banks' — a trend he identified across the Australian economy, seven years ahead of the Global Financial Crisis and banks bail-out in 2008.

Prudential regulation is in a similar mess. As a result of recent reforms, no one knows whether or not bank deposits are guaranteed by the Australian government. However, because the major banks are considered “too big to fail”, they are generally considered to be effectively guaranteed. Of course, except when faced with irresistible political pressure, they reject any notion of a corresponding social obligation.

Some of the country's most senior executives have been warned by Treasurer Scott Morrison, that lying to the corporate cop could land them in jail. It follows admissions from AMP at the banking Royal Commission. pic.twitter.com/peZP1kAVWH

Everybody knows now the kind of thing that has been going on at AMP and the Commonwealth Bank.

The Royal Commission hearings are open and relayed on air; the story is about money, and crime is being mentioned; it is getting its 15 minutes’ of fame — and more.

A second look shows how the break with public responsibility came with privatisation.

It can be deplored, or defended as a good thing if it brings prosperity to the few (who supposedly will share it around, wisely and fairly), but it is now going to be most hard to deny.

The term “regulation” is being repeated, as is “effective regulation”, with inspectors – watch dogs now – and sanctions.

But that is just for behaviour within a lightly regulated scheme, where the problem is clearly more structural, cultural and systemic.

What about a real, broad review of the banking system, including regulatory provisions for the ownership and operation of financial institutions, founded expressly on the public interest?

We did, after all, give privatisation and deregulation a good go, a free kick, a fair trial; if the pendulum goes back the other way, that might be argued now as a true reform.

BREAKING: In a surprise revelation, Treasurer Scott Morrison has admitted that he has a twin brother who last year spent time posing as him trying to block the banking royal commission. He said "It wasn't me. The commission was always my idea. I backed it from the start". #auspol pic.twitter.com/uNvnFv9mdA