Norington smears Wixxy: The Australian gets caught lying, but refuses to apologise

The Australian newspaper has allowed one of its writers to carry on a malicious personal vendetta against an IA contributor in its pages and then, after being found out, has quietly altered its online story and carried on. Managing editor David Donovan reports.

[READ THE ACCOMPANYING DETAILED RESPONSE TO THIS ARTICLE HERE]

IN A SCURRILOUS, error-strewn article published last week (25/11/16), The Australian newspaper has attacked Independent Australia contributor Peter Wicks and then, after refusing to apologise or retract the most serious errors, has quietly removed some of the defamatory claims from the online article.

The article, entitled ‘Michael Danby staffer exposed as pro-Shorten blogger’, attacks Wicks for alleged deceit, supposed conflicts of interest, and suggests that another blogger has been writing his articles. All of these allegations are demonstrably false.

Ironically, The Australian itself neglects to reveal the author of this “poison pen” article, freelance journalist Brad Norington, has himself significant alleged conflicts of interest and personal ties to – and a notable personal enmity towards – Peter Wicks.

Comically, the article also alleges that Wicks’ ‘often makes … factually incorrect claims’, before claiming he had previously worked in a hardware store — something he simply never had.

Wicks detailed these errors in a letter to The Australian on Sunday (27/11/16), however the paper neither retracted, apologised, nor published Wicks’ letter.

Instead, The Australian’s management told Wicks in a letter it ‘stands by the article’, saying it

Wicks’ complaint to The Australian is pictured below: 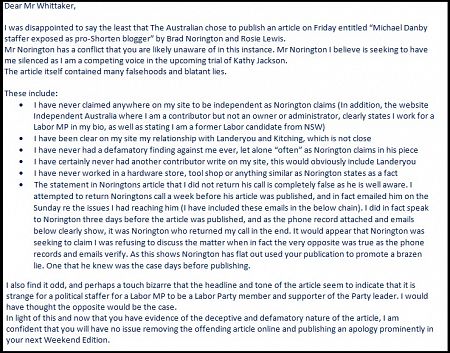 Yet despite claiming to stand by the article and everything in it, The Australian subsequently altered the online version of the article to remove the following paragraph:

‘The Australian sought comment from Mr Wicks about his dual roles as a blogger and political staffer, and whether he was receiving assistance with his blog. A fellow staffer in Mr Danby’s Melbourne office said Mr Wicks was in a meeting and not available, possibly for hours. Mr Wicks did not return later calls.’

This allegation did not appear in the original print version of the article, but did appear online — until it was removed by the newspaper on (or around) Thursday 1/12/16. It was clearly false, as demonstrated by the phone records included in the more detailed article accompanying this one.

Amongst many other things, Norington attacks Wicks’ recent employment with ALP Federal MP Michael Danby, saying Wicks had claimed on his personal blog Wixxyleaks that he was “independent”. In fact, Wicks had always made it plain on his site and others that he is a Labor supporter, member and, in fact, a former NSW State Labor candidate.

It should be noted here that, due to Wicks’ well-known and oft-acknowledged affiliation, this publication always includes an appropriate disclaimer at the end of his political articles. Moreover, when Wicks became a Labor staffer in late October, he informed IA and his Independent Australia bio was consequently updated in early November to reflect his new employment. Oddly, Norington fails to mention Independent Australia ‒ a member of the Australian Press Council and far more popular website than Wixxyleaks ‒ at all in his article, despite Wicks being a regular, long-term contributor to this publication.

Both Wicks and Landeryou have forcefully denied this false, fanciful and spurious allegation.

Wicks had this to say when asked to comment on this claim:

“I have never had anybody else write anything for me that has appeared on my site, or anywhere else, with my name attributed to it. I have obviously quoted others, but when I do so I make it abundantly clear. This is likely the same anonymous source that told him I worked in a hardware store, and says a lot about the credibility and knowledge of Norington’s sources, and perhaps explains the questionability of some of his recent work.”

A source close to Landeryou said the following:

"Norington lies. Peter Wicks has proven himself entirely capable of excellent online reporting without any assistance from Andrew.”

In his piece for The Australian, Norington reveals Wicks as being a rival reporter on the Kathy Jackson/HSU scandal (a major investigation known as “Jacksonville” by both IA and Wixxyleaks), but declined to reveal his close personal ties to Wicks. As has been previously revealed in IA, Wicks was a personal contact of Norington and alleged source during the 2014 Trade Union Royal Commission — and afterwards. Wicks says he had previously been on good terms with Norington.

These details were reported in Independent Australia and Wixxyleaks, but not included in Norington’s article in The Australian, the publication for which Norington had been an employee and at which he now occasionally freelances.

However, after Wicks wrote some articles critical of Norington’s more recent reporting and commentary, it seems Norington harboured a bitter personal grudge against Wicks.

The depth of Norington's anger was revealed in an angry, misspelt text message he sent to Wicks one night in early September, in which he calls Wicks a ‘piece of shit’: 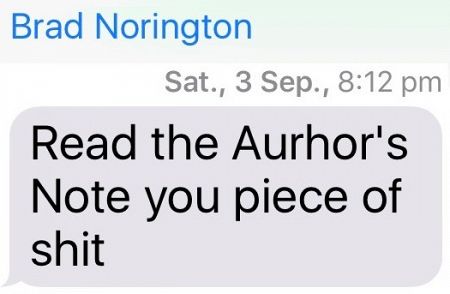 Norington's text to Wicks reveals the depth of his hurt feelings

The Australian, of course, is a publication that has been repeatedly found to have made defamatory and factually incorrect claims in its frequent attacks on its many ideological enemies. Its parent company, News Corporation, has also been implicated in illegal activity in the United Kingdom, including phone hacking and bribing police. A senior News Corp UK employee, Mazher Mahmood (AKA the Fake Sheikh) is now serving a jail term for perjury and obstructing the course of justice, during an entrapment exercise that went wrong.

Despite Norington being The Australian’s New York correspondent for several years up until 2014, thereby missing the bulk of the Jacksonville saga, he has written a book about the matter and does not dispute descriptions of himself as having followed events from the beginning. And in his recent article in The Australian, Norington attacks Wicks’ rival reporting of the HSU scandal.

However, Wicks is widely regarded as being more knowledgeable and, indeed, more balanced in his reporting of the affair than others in the mainstream media, Norington included.

For instance, former ABC Media Watch host Jonathan Holmes had this to say about it in the Fairfax press in October 2015:

'It's only fair to note that the blogger Peter Wicks and the small website Independent Australia were telling us for years that Kathy Jackson, far from being a heroic whistleblower, was in fact a bigger misuser of the union's funds than Craig Thomson. Not enough people, in the mainstream media, in the Gillard and Abbott governments, or the on the royal commission's staff, paid attention.)'

True dat RT @madwixxy: The only news publication to go after Kathy Jackson waaaay before anyone else was @independentaus #auspol

A source close to the HWU and the ALP alleges Norington may himself have a conflict here, due to some of his main Jacksonville sources being Asmar’s factional enemies in the Union.

More so, given some of Norington’s sources appear to be far from squeaky clean.

"Norington seems to be being used by corrupt elements in the Old Guard of the HSU, who failed to do anything about Jackson and now face a big character test about what they'll do about her successor, Chris Brown, in light of disturbing Herald Sun revelations of his inappropriate spending. Brown is a major source of Norington's, as identified in his recent book.”

Wicks told IA he had lodged a complaint with The Australian Press Council, and was reviewing his legal options to gain remedy for the damage done by Norington’s malicious and careless article.

He said it was far from the first time he had been unfairly attacked and defamed by The Australian:

The Australian has personally targeted me and sought to discredit me since my fifth article on the HSU back in 2012, as they didn’t like me challenging their glowing endorsements of Kathy Jackson.

I had hoped that they had moved on from the days of attacking me for covering what they have failed to, but am disappointed to find that this is not the case.

I had also hoped that the level of reporting of events involving the Health Services Union had improved, but it would appear my hopes are in vain. The reporting seems just as biased, just as misinformed, and just as personal as it ever was.

I also note that the Australian has had to modify their online version of the story.

This is why I am grateful that we have a transparent independent media source in Independent Australia, as readers deserve nothing less than the truth.

Independent Australia attempted to contact The Australian for comment about this piece but was unable to reach either the news desk nor a spokesperson for News Corp yesterday (3/12/16).

READ THE ACCOMPANYING DETAILED RESPONSE TO THIS ARTICLE HERE