The old media are rewriting history about Kathy Jackson and who broke the story she was rorting HSU members' funds. Peter Wicks sets the record straight.

WITH THE 70 charges being laid against Kathy Jackson the media have once again gone into a frenzy of self-congratulation and misperception.

There are many seemingly claiming to have broken the story, been there from the start, and set the tone for the coverage of the story.

Don’t get me wrong, many of those making the claims have played vital roles in the demise of Tony Abbott’s heroic whistleblower but it’s time we busted some of the myths.

For years, Kate McClymont, one of Fairfax’s leading investigative journalists had been proudly displaying anything but an ability to investigate when it comes to Jackson. McClymont has seemingly taken Jackson’s word for everything and run stories appearing to be based solely on Jackson’s word — which we now know is the word of a liar and fraudster.

To her credit, however, McClymont was crucial in the exposure of Michael Williamson who is now serving the remainder of a five-year sentence in prison for approximately 20 less charges than Jackson faces, and relating to around $500K less than Jackson is accused of defrauding.

McClymont has never had the courage to say she was wrong, or ever acknowledge her failure to look into Jackson, despite being fully aware of the allegations against her and having easy access to the evidence.

Then there is Nick McKenzie from Fairfax who has been quite vocal in his claims of breaking the story of Jackson's spending and slush fund.

Not to put too fine a point on this article from Nick McKenzie about Kathy Jackson: https://t.co/RDndTABYFk pic.twitter.com/f5LioXHrtZ

Nick McKenzie’s 2014 piece along with Richard Baker, and the follow ups with Ben Schneiders, Nick Toscano and Royce Millar went into the NHDA slush fund set up with money from selling out the workers at Peter Mac Cancer hospital.

The exposure of this slush fund was crucial in changing the mainstream perspective on Jackson — turning her from a whistleblower in the publics eyes to someone willing to steal from cancer researchers. While McKenzie's piece and it's follow ups didn’t contain any new information as such, they linked the NHDA fund to Peter Mac which had never been done before. This was both vital and timely, the link to Peter Mac was a crucial one and the story ran just before the HSU hearings at the Royal Commission into Trade Unions.

While these pieces were a vital strand of the tangled web, the slush fund only covered approximately $284,000 of the over $1.4 million that Jackson is facing charges on.

There is no doubt that this story altered the coverage of the mainstream media from being pro-Kathy to being anti-Jackson. Years of knowing of documentation and solid evidence meant little, but the words of someone from within the “special club” meant far more.

Then there is Brad Norington, formerly of the Australian, who many will have seen interviewed by Leigh Sales on ABC 7.30:

Rather laughably, Sales introduces Brad as someone who has “followed every twist of this saga”.

How he managed to do that is difficult to work out, given that for much of the saga Norington was a foreign correspondent for The Australian, based in the United States. In fact, Norington came to the saga at around the time Jackson was appearing before the Trade Union Royal Commission, in 2014, years after Independent Australia started exposing Jackson and Lawler, in May 2012. Norington has done little or nothing to correct the false impression that he has been there from the start of this saga. Norington came into the story shortly before the Royal Commission commenced, and despite the rhetoric has uncovered little if anything new in the Jackson HSU matter, instead relying on the work of others to make up his book Planet Jackson — a title strangely similar to the “Jacksonville” title IA and Wixxyleaks used for the series of articles on Jackson's deeds that preceded other mainstream reports by several years.

Norington, however, did break entirely new ground with his investigations into the financial affairs of Jackson, Lawler, and David Rofe QC, whose $30 million estate they came to control, despite Rofe suffering from dementia. Again, this was an example of superb investigative journalism, certainly more so than we saw from most of his colleagues at The Australian.

This brilliant work by Norington was also utilised in the eye-opening and jaw-dropping Four Corners episode, which so brilliantly displayed the Jacksonville mentality.

While I am happy to commend the hard work of others when they have broken new ground, for those in the mainstream, it is not a two-way street, with them routinely taking credit for not only their own work and that of others as well. Fortunately, anyone with access to Google can see who was publishing evidence of Jackson’s questionable spending and shelf companies back in 2012. 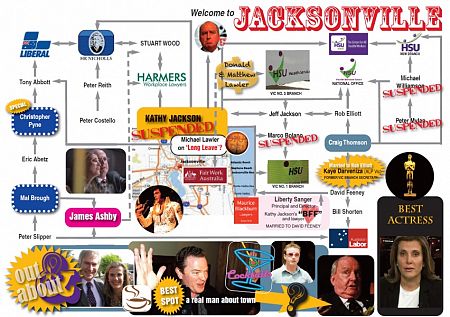 Catch up on the full saga on Independent Australia's dedicated Jacksonville page HERE.

As for myself, I’m quite comfortable saying that I think no other publication has followed this story longer, in as much detail, and broken as much new ground as Wixxyleaks and Independent Australia. In fact as we continued to show those in the mainstream how investigations involve evidence more than the word of a self-proclaimed whistleblower, rather than breaking the story – as they now appear to be claiming to have done – then ridiculing us and sending lawyers after us to try to stop our coverage.

Despite this, you will never hear me claiming to have broken the whole story, as there were others writing about Jackson’s deeds well long before I came along. In particular, Vex News run by Andrew Landeryou.

Vex had been following this saga for years before I arrived on the scene and had delved into the fallout from the Jeff Jackson and Pauline Fegan factional brawl that became the catalyst for everything that followed. While Vex may have not followed the saga through to its current point, Andrew’s assistance and knowledge has been invaluable to the Jacksonville series, despite us disagreeing occasionally.

So, while everyone scratches their heads regarding the exact charges that are involved, the media are keen to talk about the dollar value as if that is they key factor in how long she may face in prison. The fact that there is more money involved than in Michael Williamson’s case may be interesting, but it's not the critical part of Jackson’s woes, despite media speculation.

The charges that will be of concern, should they be amongst the 70, will be those involving “destruction of evidence” or “perverting the course of justice”. These are the meat in the roll, the dollars are merely the gravy.

The vast majority of Williamson's sentence is for these charges, not the fraud.

In Jackson’s case,the excuses of mystery floods and disappearing exercise books may not be enough to convince a magistrate.

It is not just Jackson with concerns regarding destruction of evidence charges, also having restless nights will be Jeff Jackson, Marco Bolano and Kathy’s old pal Ruth Kershaw, who has also had allegations made against her in this regard.

Kathy and Kershaw: kissing but not telling (Source: supplied)

Also concerned will be the current secretary of the NSW Branch of the HSU, who has had many questionable dealings with Jackson. During the Royal Commission, it emerged that he was sent to Melbourne specifically to ensure documentation was not destroyed by Jackson. Instead of arranging for the boxes of documents to be kept safe and secure, he instead allegedly stood there and watched as Kathy Jackson and Marco Bolano loaded them into a car and drove off in search of a mystery flood.

I wonder if he gave them a kiss goodbye and a wave as they left with the evidence?

The only downside to the charges being laid at this time was that, perhaps, the biggest victim of Jackson’s lies (aside from the members) was on a plane somewhere over Europe.

Craig Thomson must have been grinning like a Cheshire cat as his phone loaded the messages at Heathrow Airport. One of those messages was from me asking for his reaction to the charges.

Thomson’s response in full was:

I am surprised that it has taken so long and so much of what has been published on Wixxyleaks and Independent Australia, and indeed what I said over five years ago in Parliament was totally ignored, dismissed and ridiculed by Walkley winning journalists and the entire mainstream media, who seemed more interested in taking down a government than investigating the truth.

Maybe, though unlikely, we can hope the accepted stories peddled by Jackson and her political cronies will now be questioned for the first time by the mainstream media. Unfortunately, however, their reporting so far does not give me any confidence they will ever concede that they were part and parcel of a great lie fabricated by an alleged criminal, flamed by political enemies with the aim of taking out an elected government.

Until they do, be assured, I will continue to fight on to clear my name.

The wheels of justice grind slowly, Craig, but at least they appear to be grinding now.

Craig Thomson's full address to Parliament https://t.co/cuES4HWXUA via @smh @fehowarth Worth a catch up (no pun intended) 😊

Listen to Peter Wicks in an exclusive member's only podcast by subscribing to IA for as little as $5.