Does Queensland need an LNG industry?

As Lachlan Barker argues, Queensland could shut the LNG industry down tomorrow without any significant loss of jobs or revenue.

In what I can only see as a sign of desperation, Queensland resources minister Anthony Lynham issued a press release* on 6 November entitled: ‘Gas paper sparks reforms on supply, demand’.

At first glance, I thought maybe Lynham was finally listening to the voters of Queensland, particularly those on the Darling Downs, who dislike this industry being in their home with an intensity that can barely be described.

However, about two milliseconds later, we get to the nub and we see the real purpose, which is to "maximise supply".

That is, the Queensland Government wants to destroy more of the State to produce more LNG — or rather, to allow foreign owned companies to get more LNG at the cost of Queensland’s environment.

And as ever when the government goes on another spruiking campaign for the fossil fuel industries, they highlight the “economic benefits”, while totally ignoring the environmental cost.

So once more we are all forced to go through the mill of showing why Liquefied Natural Gas (LNG) is completely immaterial to Queensland’s economic wellbeing.

So let’s start with this paragraph:

Oil and gas extraction in Australia employs 22,300 people, or 0.19% of the workforce. This figure comes from the Australian Bureau of Statistics (ABS), but the figures aren’t broken down another rung to state level. I contacted the ABS and they, with great efficiency, provided me with the Queensland numbers.

Only 7,700 people work in oil and gas extraction in Queensland, 0.33% of the state’s employed workers.

If the industry was shut down tomorrow, the employment figures would not move in any real fashion.

What’s more I have no doubt this press release was really written by the Australian Petroleum Production and Exploration Association (APPEA), and never forget APPEA once claimed gas had already created 100,000 jobs in 2014.

Whenever you see the figures on income from LNG in Queensland from those supporting the industry, you only ever see the word "revenue", and that’s always in the eleven figures range.

A$17 billion in 2018-19 from LNG export was a recently quoted figure from Queensland treasurer Curtis Pitt.

However that’s revenue, not profit. Recently, I reworked the production figures and they show that production costs run at US$6.75 a gigajoule (Gj), while the price the Gladstone plants are currently receiving is in the US$5-6 range. Thus they are losing money on each gigajoule at this time.

Furthermore, the LNG companies exporting from Gladstone are close to 80% foreign owned. Thus only approx $4 billion of that figure quoted by Curtis Pitt would come into Australian board rooms. 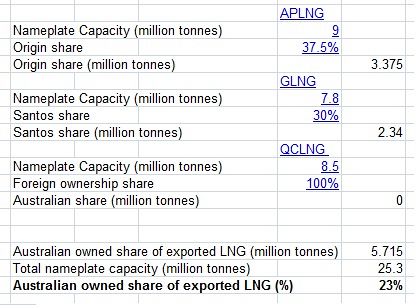 So currently, for all that environmental destruction in Queensland, Australia would receive $4 billion and I can assure you there is a multitude of clean and sustainable ways to gain $4 billion — agriculture and tourism are two obvious examples.

As one example, in 2013 Deloitte Access Economics projected that Australia wide income value added from the Great Barrier Reef was $5.7 billion.

Also please note here, Curtis Pitt is – as usual – wildly optimistic with that projection, at current LNG prices per tonne – which are unlikely to change due to oil and LNG glut – 22 million tonnes would receive closer to A$8 billion.

Of which Australian companies would receive in revenue A$1.9 billion only.

Regional growth? Hardly. When the construction of the gasfields of the Darling Downs and the LNG plants at Gladstone was at its peak, then "yes" there was regional growth. However that was then, this is now.

This article by Leith van Onselen describes that well:

This article from the Toowoomba Chronicle gives some measure of the bust now coming to the Darling Downs:

In that article, the writer couldn’t escape the desperate yearning hope that the boom times would continue forever.

However, he nails the long term problem for economies like the Darling Downs here:

‘The reason this happened so fast was the crash in the oil price (by more than 50%).’

As Bruce Robertson of IEEFA told us back then, US$50 is the long term average for the oil price – which the price of contract sold LNG is pegged to – and that’s what it is at now. 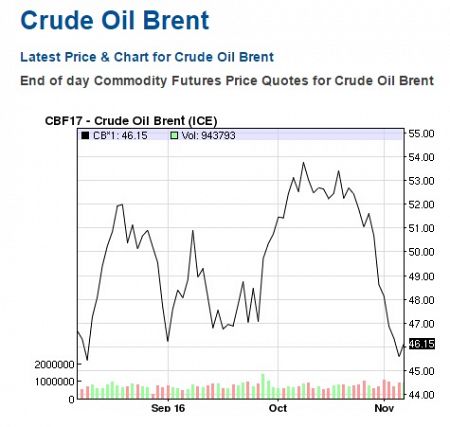 With no foreseeable oil price rise, the current loss-making price that the LNG companies of Gladstone and the Downs is getting will not go up and, so sadly for the Downs and Gladstone, the bust is here to stay.

Most oil analysts don’t expect the current oil glut to clear before 2020 and some say it will go on longer than that.

I am one of those and project that the LNG plants of Gladstone will continue loss making for the rest of their existence until Santos, Origin and Shell eventually give it up.

EXCUSE ME? ‘Significant economic benefits’ is where Mr Lynham ratchets up into hyperbole and simultaneously descends into farce. 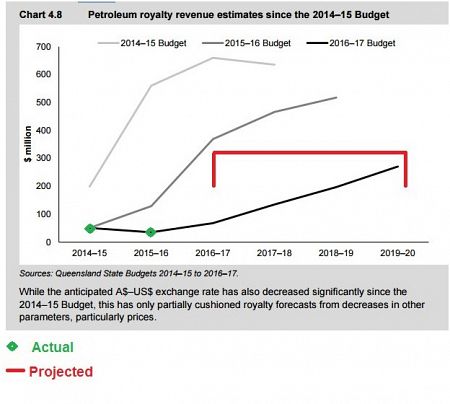 As you can see here, the Queensland government continually overestimates the royalties that will flow from gas. 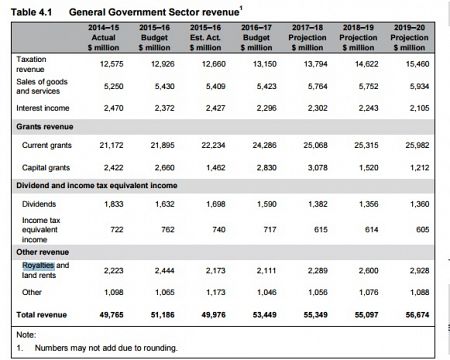 Can that be right? Whenever I do an article on LNG in Queensland the figures presented by government and APPEA are always so fantastically, wildly overblown that I doubt my maths.

So here is the sum from my spreadsheet for you all to check:

The $36 figure comes from this table:

And also note that if Queensland does get A$271 million in petroleum royalties in 2019-20 that’s still only 0.48% of government sector revenue.

So that’s why I say "farce" when Lynham says "significant economic benefits", again and similarly to the jobs figures, Queensland could shut the entire LNG industry down tomorrow and government revenue would suffer a (sarcasm alert) catastrophic drop of 0.07%.

Last section deals with this paragraph from Lynham’s press release:

'We have strong demand, and solid foundations for reliable supply for the next 30 years, but there are challenges.'

Strong demand? Hardly, or rather there is strong demand at this price, but as I pointed out above, this cheap LNG price means the LNG companies of Gladstone cannot make a profit. So, "yes", you better believe it. While the customers of Asia are getting their gas at such a bargain basement price, they will continue to want more.

In the unlikely event of the oil price going up, the Asian customers will simply break their long term contracts and go looking for cheap gas elsewhere on the spot market.

With the LNG market in glut, and set to continue, it’s a buyers’ market, and they can do so with impunity. 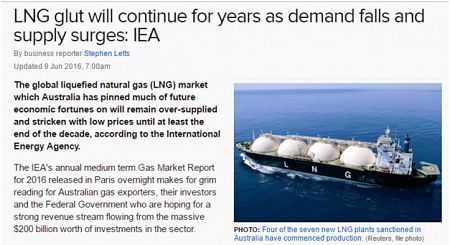 I simply have to come up with a new way to express my exasperation with the Queensland LNG industry, but, "reliable supply"?HARDLY.

The CSG fields of the Downs are already reporting faltering production levels at the wellhead. First pointed out here by Mark Samter of Credit Suisse:

Credit Suisse reiterated that warning in this article at HotCopper on 14 October this year, referring to Santos and their LNG plant, Gladstone Liquefied Natural gas (GLNG) saying:

‘With ‘only’ [about] 300 wells drilled at Roma to date and flow rates seemingly disappointing, potentially 1000+ more wells could be needed to get Roma up to the [roughly] 300TJpd capacity’.

‘Clearly the GLNG project has not gone according to anyone's plan, in terms of both cost to get to first gas, but even more so from a gas supply perspective.’

I also loved this bit:

'Given all this, Credit Suisse said "we strongly feel that anyone sitting in front of you defending their GLNG model as gospel is delusional and quite frankly wrong. No one, least of all us, can say with any certainty whatsoever what the level of supply, nor cost of that supply, into the project is going to be”'.

So there you have it, Queensland could shut the LNG industry down tomorrow and jobs and revenue figures would not change in any significant way.

The only thing that was correctly projected about Queensland LNG was the widespread environmental destruction this industry would bring.

So shutting down the industry is a good idea all around.

Final note, as pointed out on multiple occasions above, the Queensland LNG industry is in appalling financial trouble, so the active decision to shut it down may not be necessary.

Most likely the market will shut it down anyway.

* The Queensland Government's press release does ask for submissions on the future of the gas industry in Queensland. If you wish to submit, see this page at the Department of Natural Resources and Mines. Send to: gasactionplan@dnrm.qld.gov.au.