The future for gas companies is looking grim and this means market forces will effect what our governments should have done and force the industry's closure, says Lachlan Barker.

THE FINANCIAL REPORTING news for Queensland’s liquefied natural gas (LNG) companies is disastrous – for yet another quarter.

Santos were the first out with their second quarterly production report and even I – a fairly close observer of the LNG market – couldn’t quite believe what I was seeing.

This puts the LNG that Santos are exporting from their Queensland GLNG plant at well below profitable.

In January this year I estimated that costs to get LNG onto the dock in Asia from Queensland were approx US$7 a gigajoule, however since things are always in flux, I thought I'd better check my figures and see if this was as disastrous as it looks for Santos.

For reference purposes an mmbtu (million British thermal unit) is about equal with a gigajoule, a gas unit you are probably more familiar with. (The exact conversion is 1.056.)

So I went back to the Australian Energy Market Operator’s (AEMO) figures from February 2015 and got the by-the-field estimated production and transmission costs.

Here the graphic shows the Santos CSG fields feeding into GLNG at Gladstone: 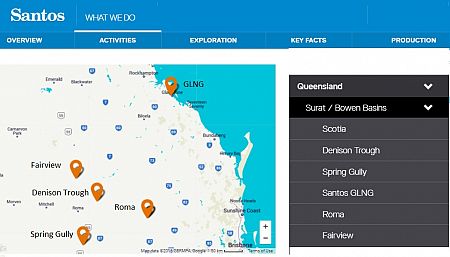 Here is the AEMO map showing where their figures are taken from: 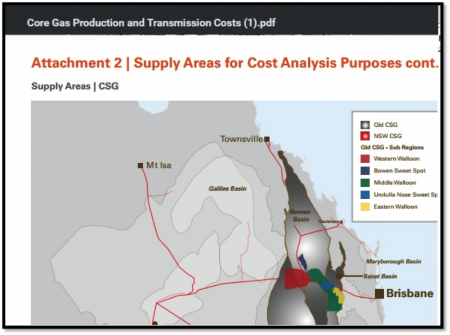 The production prices for these gas fields are as so: 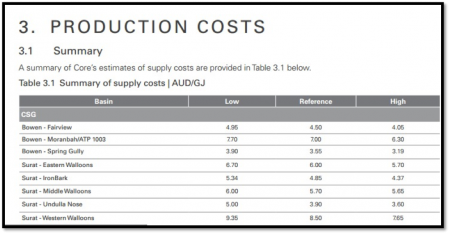 I took those prices over to a spreadsheet and got an average: 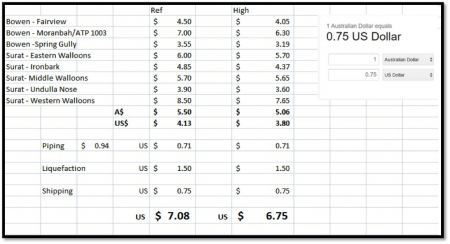 Liquefaction and shipping cost comes from this article by Michael West and Bruce Robertson.

Piping fee via the Queensland Gas Pipeline comes from the AEMO report. 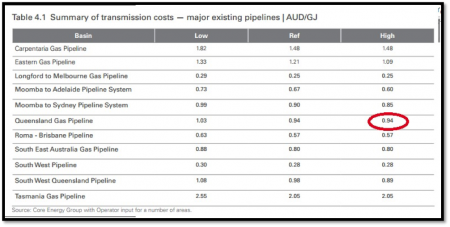 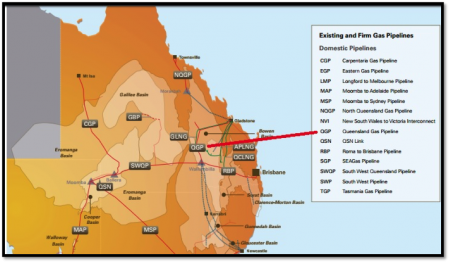 There in pretty pictures is the awful story for Santos, Origin and QGC (QGC now owned by Royal Dutch Shell).

I’ve been conservative using the lowest cost estimates – the paradoxically titled high productivity case – to give the LNG companies a fighting chance, and the evidence is there, clearly, for all the world to see.

The lowest price the Queensland LNG companies can transport their gas to Asia from Queensland is US$6.75/Gj.

Santos reported above a price of US$5.19/mmbtu, which equates to US$4.92/Gj, so in that quarter, Santos was losing close to US$2 per gigajoule shipped.

Origin and Royal Dutch Shell haven’t released their second quarterly figures (at time of writing) but they will be very similar.

The latest figures I have for QGC, Q4 2015, before they were bought by Shell, gave a price of US$7.94/mmbtu, while Santos listed the same price US$7.94/mmbtu for that quarter. Origin had no meaningful figures from APLNG to report at that point.

So the second quarter 2016 figures for Origin and Shell will be equally disastrous, given that their price is pegged to the same world oil price.

What does the future hold for Origin, Santos and Royal Dutch Shell in Queensland, then? Well, nothing good.

The price of LNG sold under contract is – as noted above – linked to that of oil and since the post-OPEC long term average oil price average has been US$55, there is no escape now for the gas companies.

These US$55 oil prices are here to stay.

Since they are both going to be exporting LNG at a loss/break even for the foreseeable future – scratch that, forever, with forever being the life of the project – it’s clear they will never be able to put a dent in that debt pile using profit from Queensland LNG.

Therefore, at some unknown time in the future, all three Queensland gas companies will have to give it up.

As for when, I guess it all depends on the holders of their debts. If the banks finally decide to tap the gas companies on the shoulder and give them the "we’re calling in your billions of debt" shout, that is the day it’s over. Until then, the LNG plants will continue to export LNG at a loss/break even.

And, of course, all the while in the background are the lives and landscapes this industry has destroyed with the sheer toxicity of coal seam gas.

Corruption allowed the LNG plants of Gladstone to get initial approval. Since then, governments have supported and continued to prop up this already dying, hopelessly failing, onshore Queensland CSG-to-LNG industry.

But thankfully, now the market is going to do what our governments should have done and close it.

And paying no tax! Gas cartels having a field day on Australian consumers https://t.co/5vz5wEgmoc @IndependentAus

The gas and coal industries will not want to know about the latest ABS figures, says Lachlan Barker. https://t.co/ip1M3Ga4s9