Black power, the media and the Commonwealth Games 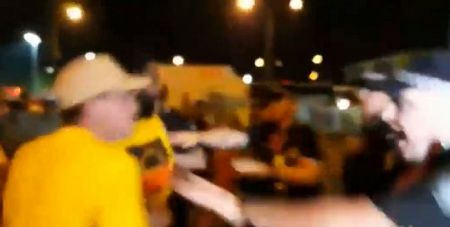 Dylan Voller and other Indigenous protesters face off with Police at Carrara Stadium on Thursday, 5/4/18 (Image screenshot from video from Warriors for Aboriginal Resistance on Facebook)

MANY JOURNALISTS in the ranks, in the days of street march bans in Queensland, suppression of the Sydney Gay Mardi Gras, or use of police horses against Moratorium protestors in Melbourne, came up against the theory of madness when sent to cover street protests.

Editors tended to insist that something or other would stir up the emotions of the alienated, who would more or less spontaneously go out in demonstration.

The idea was, there would always be latent violence, so it needed a cover, much like crimes or an accident.

But if you stopped to obtain information on what the protest was about, what the argument was, what the people wanted, it could be hard to get a run in your news outlet with it — no “free publicity” for the mob.

So, it would be a nameless event, charged up with some violence if the police handled it rough that day.

The theory might have had some real fear behind it, a generational hangover experienced by older editors and many others who lived through the bad, bigoted days in 1930s Europe, when the idea of a mob going mad looked especially credible — and millions of lives were ruined.

Competing messages, as with Mohandas Gandhi in India saying do it peacefully did not carry the same appeal.

As Prime Minister in the early 1970s, William McMahon called up the old fear, seeking to condemn the apartheid system in South Africa, while also condemning protests against the touring Springboks Rugby team as too dangerous and divisive.

It was satirised by cartoonists as “apartheid bad, protest worse”.

WEARING DOWN THE PHOBIA AGAINST PROTEST

All manner of opposition groups, or campaigns, have worn down the phobia against dissent and the proscription on fair reporting of it, so that, for example, after the decades of suppression under National–Liberal governments in Queensland, liberalised laws on street protest were, in 1992, at last put in place by the reformist Goss Labor Government, elected in 1989.

It had always been a potent enough argument to suggest that journalists should find out and publish why something was happening, beyond the threshold of fear of mob rule — telling who, what, how, when, where and why.

(Image screenshot from video from Warriors for Aboriginal Resistance on Facebook)

Getting back to the Games, we are getting some benefit from the change that has occurred.

The protests on Commonwealth Games opening day, on Wednesday, were treated as an important side-bar to the over-drive on spectacle and sport, along with transport problems, menacing weather, Prince Charles’ non-Games activities and two motorcycle police colliding with each other in his motorcade.

A scan of reports in main media produced ample and fair treatments of the two demonstrations: a large group of mainly Aboriginal protestors blocked the Queen’s Baton for a time on its way to the opening ceremony, with some police action, and then three people were arrested for public nuisance at the stadium, accused of trying to push into the venue — their Magistrates Court appearance put off until after the Games are over.

This reportage included at minimum the themes of grievance: “no justice no games” (social and institutional disadvantage, and poisonous racism against Aboriginal people ignored while others had fun), and “colonisation is not a game”, the idea that the Commonwealth, as in Commonwealth Games, still being represented by a Crown Prince, took over from the British Empire that brought settlers and alien rule to Australia. The protests this time referred to massacres and other acts that created a “genocide”.

The actual idea of racial discrimination in Australian being a “British” problem is worth examination. It is not rare to hear righteous talk from visiting British about continuing suppression of Aborigines, while to speak truthfully it did start off British-made and became intractable — handed on to Australia at independence in 1901.

Most mainstream media got across these points, what happened and why the protests happened. For example, Brisbane’s Courier Mail gave two seven centimetre columns on page two, neutral in tone, no “language”, headlined “Indigenous activists storm gates of opening ceremony”. Local ABC was similar.

A key reward for the journalists who actually talked to the group was a personality angle, as one of those arrested was Dylan Voller, now 20, the young man seen on television across the nation, hooded, getting mistreated in a Darwin detention centre. His case gave heavy impetus to convening of the Royal Commission into Youth Detention in the Northern Territory.

He became the story, declaring he was fed up with the treatment given to Aborigines — and who could blame him?

The Australian newspaper, as a rule notorious for blatant political bias, this time came up with a resourceful and good report under the by-line of their reporter Charlie Peel.

Comprehensive, informative and fair, for what it is worth this would get my Commonwealth Games Media Medal for the day, even ahead of the enthusiastic Channel Seven team who have been producing a dramatic and smooth outside broadcast from the Games.

KEEPING A FRIENDLY EYE ON COPS

Here is a footnote on the official Police statement about 'not tolerating disruptive behaviour'.

If there must be warnings, these need the imprimatur of the elected government or should come from a senior officer after checking with the government.

Police have a lot to put up with and the problem would be with certain officers hearing something like a threat on their behalf, maybe getting the wrong idea and thinking it is in order to make arbitrary pronouncements on what they will tolerate, define matters like “disruptive behaviour” to suit themselves and, in the end, start to think about arbitrary acts to enforce it.

The Police Service in Queensland is living down the black marks of corrupt and anti-social behaviour obtained in the Bjelke-Petersen era, before the 1990s reforms.

Especially on the Gold Coast, where there are repeated complaints and inquiries into police behaviour, obviously gaps remain in the quality of training and discipline.

Much progress has been made in relations with the public, as would be supported by another statement, with different kind of emphasis, carried in the article in The Australian.

In it, the Queensland Police Deputy Commissioner Steve Gollschewski said protesters had been well behaved and managed to get their message across without disrupting the community:

"There’s more protest activity planned for today and we’re confident that will be done in a way that will minimise the amount of ­impact that it has on the broader community as well as the people attending the Games."

Half the time, it’s just how you choose to say it.