SUBSCRIBE   DONATE LOGIN SHOP
SUBSCRIBE   DONATE
How we prevented a Morrison dictatorship
How Howard screwed the Libs
U.S. site tries to ruin what makes fairy bread great
Bloody Idiot of the Week — Episode 28: Get used to it
Morrison's 'politics of retribution'
Mining

Here we Joh again! Big miners put out the trash for the Qld election

The Queensland resources industry has launched a PR spin campaign before the Queensland election to exaggerate the importance of mining and help its ailing wholly owned subsidiary — the Newman Government. Lachlan Barker reports.

THE QUEENSLAND MINING INDUSTRY, through their rabidly one-eyed lobbyists, the Queensland Resources Council (QRC), have been at it again — grossly exaggerating the importance of mining to Queensland in the run up to the Queensland election.

Now, if you feel you’ve read this before then you would be right. I dealt with the national spin body for mining, the Minerals Council of Australia, in an article last year. That was an excursion into the wild exaggerations, unbelievable contortions and outright falsehoods mining uses to exert their control over governments in Australia — Federal and state.

The playbook has not been updated. Just about everything I found regarding the national lobby group applies almost without alteration to the state body in Queensland.

However, since we have an election coming up, we are all forced to go through the process of highlighting what a load of tauro-scatological nonsense the mining spin merchants put out.

It started on ABC’s AM program on 8 January this year, when Queensland Resources Council head, Michael Roche, said:

Well, that claim is simply untrue. Here are the latest employment figures from the Australian Bureau of Statistics (ABS), which tells us there were 65,200 people employed in total in mining in Queensland in November 2014, with the total number of employed Queenslanders at this time being 2,329,000. 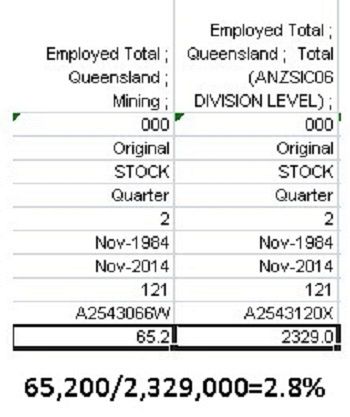 Thus, at last count, mining made up 2.8% of the Queensland workforce. Mining’s contribution to Queensland employment is closer to one in 36 jobs than it is to one in five.

The leading four employers (by sector) are health, retail, construction and professional services. 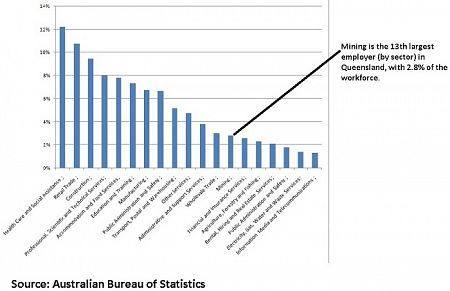 So where does Michael Roche get his "one in every five jobs" from?

Well the following graphic from the QRC website tells a fuller story:

As you can see one figure (l) is in white, and the other four are a more shaded grey colour, indicating one direct job and four indirect jobs are created by mining.

At this point I contacted The Australia Institute (TAI).

The explanation for this enormous discrepancy [in job numbers] is a frustratingly common one.

So then I ferreted through the spin document put out by the QRC and tried to find some clarity from them around these large job numbers and found something on page 6:

I rang the firm that did the report for the QRC, Lawrence Consulting and confirmed with the report’s author, that indeed, some examples of indirect employment are the

So the QRC are saying that some percentage of employees in these industries can be added to the mining account.

The problem with this is once you start claiming jobs in related industries, where do you stop?

Cameron Amos provided an example to illustrate this bizarreness:

Claiming a transport job was created by the people who hired the transport company might make sense.

After all, taxi drivers don’t stay drivers for long if they don’t have people paying for their services.

But the people paying for the taxi come from all sorts of industries too - health, education, construction, finance, the arts, and so on.

And if all those industries counted that taxi driver’s job as one created by their own, all of a sudden you’d have six taxi drivers on paper and only one on the road.

So, a mining lobbyist would have this one taxi driver employed by six different industries.

If all industries calculated “indirect jobs” the way mining did, Australia would employ 56 million people, nearly 2.5 times the pop #730NSW

In the current instance, mining is claiming some percentage of Queensland employees in manufacturing, transport, postal, construction, finance and insurance, and professional, scientific and technical, are all to be accounted as employees of mining.

All sectors do this: retail uses transport to get their products to the supermarket, agriculture uses professionals like agronomists, soil scientists and so on. But if each sector began adding in employees in other sectors that they utilise, then the books would record that there were more people employed than living in the state.

Additionally, when we are discussing Queensland, the tourism/mining comparison always comes up, so figures published by Tourism and Events Queensland (TEQ) in September 2014 showed that:

A little more than double the number of employees in mining.

So we turn to money and really everything said above applies here as well.

Mr Roche said that “one in every $4 of the Queensland economy” comes from the resource industry.

The report lists this as

Once again, this bizarre direct and indirect spend and type I and type II multipliers have been added here to create, literally out of thin air, this figure of $77.6 billion.

The real figure is close to a third of that, as this report from the Australian Industry Group shows. 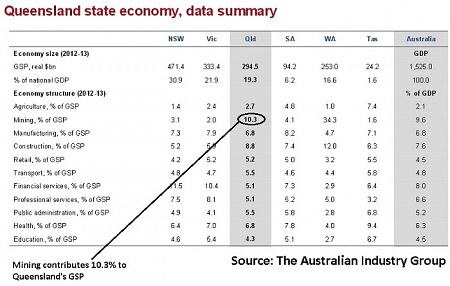 Even this much more accurate figure is taken further down by the Queensland Department of Natural Resources and Mines, which says this on its website:

In 2012–13 the mining and petroleum industry in Queensland generated A$25.6 billion or 8.8% of gross state product.

Really, it couldn’t be clearer than that — the Queensland Government department responsible for the very mines that the QRC are spruiking with such wild exaggeration reports mining’s contribution to GSP as only a third of what the QRC would have us believe.

Tourism contributes $10.93 billion directly to the Queensland economy, accounting for 3.8% of Queensland’s GSP.

So mining, particularly in the area of export dollars, is important to Queensland — just nowhere near as important as the QRC would have us believe.

However, when you factor in the drop in the price of thermal coal particularly, one can’t help wondering if the environmental destruction that mining lays upon the landscape is worth it.

Additionally, I haven’t had space here to go into the question of subsidy to mining and, of course, the enormous untold sums of money involved in the destruction of the environment that mining causes – reclamation of land, greenhouse gases, tailing dam run off, subsidence, damage to the Great Barrier Reef, interference with the water table – along with all the rest.

So to conclude with what we can quantify, with verifiable data:

One can only hope that the next government of Queensland, whosoever that may be, will take heed of these simple facts.

Campbell Newman - a great friend to foreign mining giant Adani, and a disaster for the Reef. http://t.co/KxhK938yc7 pic.twitter.com/ZL4XkStfeK

So, here in Queensland, the TV is awash with Adani ads. I guess you could regard that as a soft donation the LNP doesn't need to declare.