The Minerals Council puts out the trash for old King Coal

The mining industry likes to puff itself up with impressive sounding numbers — but unfortunately many, if not most, of these figures are absolute rubbish, writes Lachlan Barker.

While working on an article about a coal mine in the Hunter Valley, I came across the website australiansforcoal, which on its home page had this:

It turns out that the australiansforcoal website is a production of peak mining industry body the Minerals Council of Australia (MCA).

I contacted The AustraliaInstitute, an organisation that helped us with the above coal mine story, and asked if they had an opinion on this — they did.

Cameron Amos, one of the economists there, was a wealth of information.

Firstly Cameron told me about the MCA’s methodology:

The MCA have arrived at a $60 billion figure by estimating coal industry output and indirect output from related industries, then adding the wages paid to workers. The report detailing their findings was commissioned by the MCA.

Cameron then said this ‘input-output modelling’  method was flawed:

The method used to produce this figure is known as "input-output modelling". This same type of modelling was described as "deficient" and rejected by the NSW Land and Environment Court. The ABS calls the process “biased” and the Productivity Commission calls it “abused”.

Minerals Council should try fighting back with facts, not abuse http://t.co/wqLhNqf7sF via @smh

Cameron Amos concluded by saying that the Mining Industry is full of hot air:

The mining industry likes to puff itself up with impressive sounding numbers. This is how it influences policy.

But to put those numbers in context:

Nailing down a simple and accurate figure for the coal industry’s monetary input to the economy is, for all the reasons Cameron mentioned above, extremely difficult.

So much so that the MCA can’t even agree with itself on a single number. On one page of the MCA website, it says ‘nearly $43 billion’, yet the australiansforcoal home page, as mentioned, puts it down at $60 billion.

I did ask the MCA which one was the correct figure but, alas, received no response.

According to Cameron Amos, again, employment numbers in the coal industry are similarly exaggerated by the MCA:

According to the ABS, coal employed 56,900 people across the country in the quarter ending February 2014. This figure is on the high end of recent numbers, yet is only nearly a quarter of what the Minerals Council of Australia suggests.

The 200,000 figure, by the way, comes again from the report mentioned by Cameron above, commissioned by the MCA, and says this:

For every job created in coal mining 3.7 jobs are created nationally in the Australian economy making up a direct and indirect workforce of over 180,000 people in 2011-12.

Nowhere else have I, or Cameron for that matter, been able to find any other support for this laughable, voodoo, goat-entrail-throwing economics.

Some of the industries the MCA seem to be claiming as part of their 180,000 indirect employees are:

Following this logic to its end point, the MCA seem to be saying that anyone who uses electricity or has any dealings with a coal industry employee is an indirect employee of the coal industry.

I did ask the MCA if they could point me to another verifiable source for this 180,000 figure, but ‒ again, alas ‒ got no response.

Here at IA,we only deal with verifiable, linkable facts for our claims, so the ABS figure of 39,100 employees is the correct number of employees in the coal industry. Currently there are 11.7 million employed persons in Australia, which means coal employs 0.33% of the workforce.

Let compare this with some other industries contributions to Australian employment.

The ABS’s Tourism Satellite Account figures tells us, for instance, that 543,600 people were employed in Australian in the tourism industry in the 2012-13 financial year. 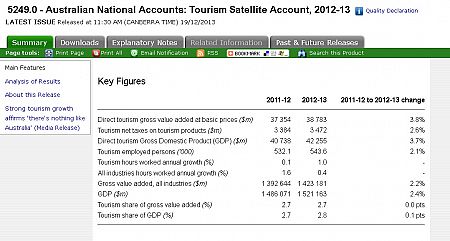 Bigger again is retail, with 1,249,100 workers employed (though the MCA probably claim some of them as coal workers somehow).

I turned to the MCA website proper to check some other things and saw there was a media section, with all their press releases — there certainly was some nonsense written there.

I’m having trouble keeping up with their output of rubbish, but be aware their operating budget is substantially higher than ours here at IA. Cameron estimated $24 million.

Their Financial Report for 2013, it reported:

Anyway, the first press release that caught my eye was this one:

BREE stands for the Bureau of Resources and Enegy Economics, which the MCA, despite their multi-million dollar budget managed to publish as

‘Bureau of Energy and Resources Economics’ (therefore BERE, not BREE) in the first paragraph of this release. 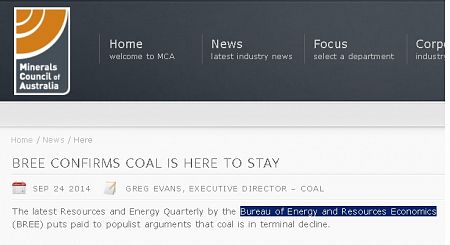 The nub of the press release was in two paragraphs

Well I went and found some government figures of my own ‒ from the Treasury department ‒ and they tell a vastly different story.

The first graphs show the future estimates around thermal coal: 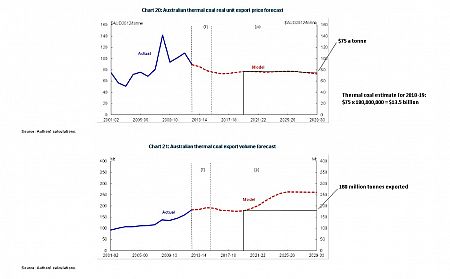 The second highlights Treasury estimates around metallurgical, or coking coal: 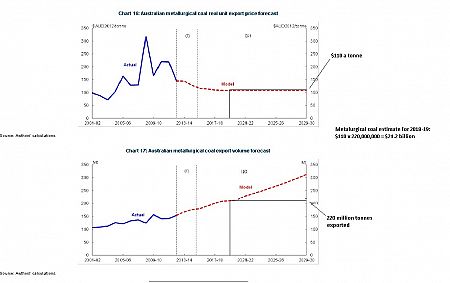 Add those two figures together and we get a total of $A37.7 billion — $15.3 billion less than the $53 billion trumpeted by the MCA.

Then, on the MCA website appeared a press release titled:

AFR: Coal delivers a clean future for the poor.

In that press release, it says [IA emphasis]:

Since 1980, 1.7 billion people around the world have gained access to electricity for the first time.

Consider for a moment the human dividend this transformation delivered. Millions fewer died of respiratory illness caused by using dung, wood and charcoal for cooking and heating.

A story in the Guardian Online tells us:

According to the World Health Organisation, poor air quality contributed to 1.2m deaths in China in 2010 – around 40% of the global total.

Further on, the press release states:

But can’t wind and solar power provide energy access to the world’s poorest? No.

Take the last decade as a guide. In the 10 years to 2012, the world added about 2500 million metric tonnes of oil equivalent to its total energy consumption. Of that increase just 14 percent came from non-carbon sources including hydro.

I couldn’t find the figures the MCA used to make this 14% declaration, but was able to access the report from BREE, which the MCA used for the ‘coal is here is here to stay’ press release mentioned above.

In that report it has a graph showing the world’s electricity generation by fuel: 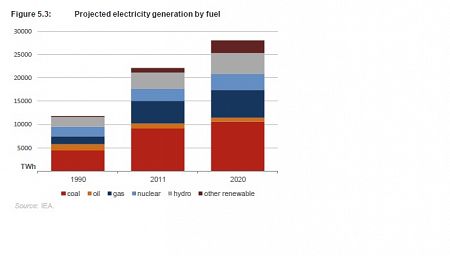 My estimates from this graph are, therefore:

Renewables will have approximately tripled from 1990 to 2020.

The renewable percentage is going up, from 21% to 25%, while we have already at peak coal.

In the end, it all came down to what are the MCA trying to achieve?

We all know the world is going renewable — maybe not tomorrow, but soon enough.

Eventually, after all this research, I came to the conclusion that the MCA are frantically trying to convince themselves that the coal industry is not ending.

Well MCA, good luck with that, but if I were you, I’d start looking for another job.

We don’t print rubbish, so why do you?