Tony Abbott and White Australia: Let's be serious about change

The innate conservatism of Tony Abbott and much of white Australia is steering the discussion of genuine Indigenous rights towards a minimalist and almost meaningless constitutional conclusion, says Jeff McMullen.

When most of the world recognises the uniqueness of Australia’s heritage, how tedious that our prime minister, as well as some public intellectuals and media voices, continue to wage a very careless and damaging war on Aboriginal culture.

Almost singlehandedly, Tony Abbott fanned the flames of the Culture Wars. First, he dismissed the Welcome to Country as “out of place tokenism”. He then hailed the arrival of the First Fleet as the defining moment in Australian history, without any appropriate admission of the devastation caused by invasion and dispossession. With a whiff of terra nullius the prime minister Australia was “nothing but bush” before the British arrived and then added his infamous insult that living on the homelands was a lifestyle choice.

You may see the prime minister’s litany of stupidity as merely a series of gaffes, but his words point to a more troubling insensitivity — a failure to comprehend the strengths of Aboriginal culture and the resilience displayed throughout the longer timelines of history. Consider Bill Gammage’s earth-science appraisal of Aboriginal "farming without fences" creating the sweet grasses that so delighted the English pastoralists. The mosaic of fire-stick farming and management of resources over many millennia is worthy of our admiration, not mere acknowledgement. The Aboriginal writer, Bruce Pascoe, in his essay, 'Bread', celebrates this custodianship as Aboriginal genius.

Prime minister, if you follow up your desire to be seen as a leader for Indigenous people, with more appreciation of the strengths of their cultures, you will also discover the importance of land rights. You will recognise the world’s most ancient land tenure and the world’s oldest multicultural country. You will discover that this diversity of Indigenous peoples through countless millennia, linguistically, culturally and with creatively different ways of problem solving, is in fact a magnificent foundation for modern multicultural Australia. Understanding the accomplishments of Aboriginal and Torres Strait Islander people allows us to appreciate the many reasons for recognition and respect, not some empty form of constitutional symbolism that someone like you later will decry as tokenism.

The prospects for meaningful recognition of the land rights, cultural rights, language rights and right to wellbeing of our First Peoples, will only be fully realised by a revolution of the Australian spirit. We must close the space between us by making these issues of far greater personal importance and be prepared to listen to Indigenous voices across the country.

Already, the innate conservatism of many in our political classes is steering the discussion of genuine Indigenous rights towards a minimalist and almost meaningless constitutional conclusion. More tokenism is not what most Indigenous people want. Symbolism has not ended oppression or discrimination.

Some constitutional lawyers, as well as the prime minister, cringe at the effort required to once and for all banish discrimination from our daily life, institutions and especially from our laws.

They don’t want a bill of rights like our neighbours in New Zealand or to risk allowing the judiciary plainly necessary checks and balances on those in the federal parliament who frequently trample the rights of Indigenous people. These same constitutional conservatives have no convincing answer to the problem that, in Australia, we have no constitutional protection of human rights and glaringly no protection for anyone against racial discrimination.

While this shortcoming remains, Australian governments can launch a Northern Territory Intervention anytime they feel like it. Our political history shows that parliaments often argue that they are acting in the best interests of Indigenous people at the same instant they deny the right to self-determination and impose harsh, discriminatory policies.

Given Australia’s pattern of discrimination, anachronistic race powers that allow a government to strip voting rights from a group of citizens and the deep historical stain of racism on the document, I say that this White Australia Constitution is not my constitution and nor does it represent you in our multicultural country.

In a submission to the Australian Government’s Expert Panel on Constitutional Recognition of Indigenous Australians I propose that Australians use the next referendum to express a 21st century concept of our nationhood and ban all discrimination based on age, gender, race, religion, culture, disability and sexuality. A confident assertion of our determination to ban all forms of discrimination would unify Australians in our diversity. By framing the constitutional amendment to apply not to past laws but to the future we would move our Constitution into the 21st Century.

Overwhelmingly Indigenous people surveyed have indicated that they want strong protection against discrimination. According to some opinion polls a majority of other Australians say that they too are ready to ban discrimination.  So it appears that only the lack of courage and conviction in Canberra that has dogged this nation for over two centuries on Indigenous issues is threatening to marginalise the genuine Aboriginal priorities. This underscores the importance of establishing democratically the real views of a majority of Indigenous people, both during this consultative period and through a national body properly constituted and funded to represent their diversity and sovereign status.

The stunning simplicity in which ATSIC was swept away and the routine dismissal of advice from the National Congress of Australia’s First Peoples, or any of the Government’s appointed advisory bodies, shows that genuine Indigenous oversight and real influence on policy even by a statutory body will always be limited unless there is an unequivocal, binding legal obligation on Government. If a majority of Australians wants to recognise Indigenous people, we need to pay heed to their needs and their views in a far more serious way.

Clearly what Australians are now discussing is far short of the Saami people’s serious constitutional recognition by the Governments of Norway, Finland and Sweden. Our national debate also consciously avoids serious consideration of the sovereign-to-sovereign relationship of American Government and Native American nations.

Ultimately, Australians must recognise that Aboriginal and Torres Strait Islander sovereignty was never ceded. There was no surrender or no treaty of resolution and so to this extent sovereignty exists regardless of anything written in the Australian Constitution. Sovereignty is not something for other Australians to condescendingly bestow. It is there for us to recognise and for Indigenous people to reclaim. No doubt, others will follow the lead of those First Nations already asserting sovereignty.

Looking ahead constructively, we already have section 105A of the Constitution that could be a useful legal framework guiding Government towards binding agreements on all of the issues of real importance to Indigenous people: land rights; compensation for historic injustices; housing; health; education and employment. All of this is doable. So let’s be serious about change.

This is an edited excerpt of the Vincent Lingiari Memorial Lecture by Jeff McMullen – journalist, author and filmmaker – at Charles Darwin University on 6 August 2015. To read tJeff's full address click here. 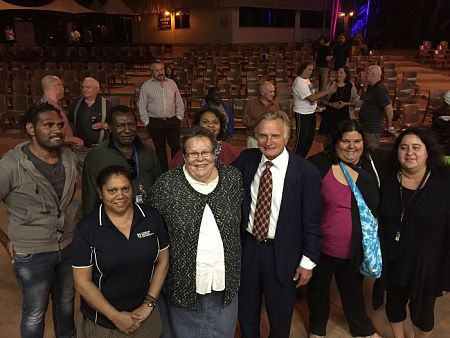 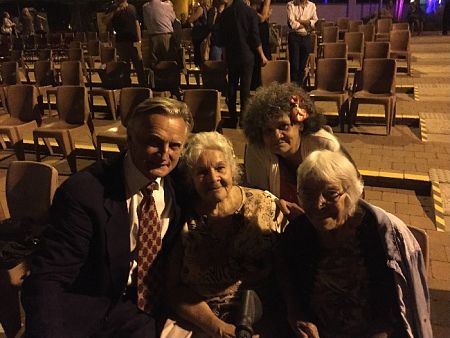 Stand up to bullies. Subscribe to IA for just $5. 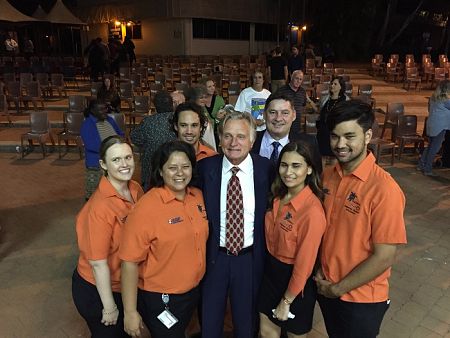 Jeff McMullen with ambassadors for the Vincent Lingiari Memorial Lecture

11 April 2018, 12:30pm 'From my experience, racism – like violence – is a contagion.' ~ Jeff McMull ...
Join the conversation
comments powered by Disqus
News updates