Natalie Cromb, along with other prominent First Nations women, including Rosalie Kunoth-Monks, will be speaking at Redfern tomorrow about the vital need for a Treaty between Indigenous Australia and their colonisers.

UNDER British law, when Australia was "discovered" by that nation in 1788, it lay within the prerogative power of the Crown to extend its sovereignty and jurisdictional control over new lands. Upon the “discovery” of Australia, it was using this notion of sovereignty that Governor Arthur Phillip declared Australia “terra nullius”  — land belonging to no-one.

This was even integrated into the Australian Constitution, which was drafted on the premise of Indigenous people being absent at “settlement” of this nation; or if present, so inferior as to not warrant a mention and, anyway, considered to be a dying race.

Whilst hailed as progress at the time, the 1967 Referendum did not fundamentally change the legal landscape for Indigenous Australians. We were still left with a Constitution that ignored the traditional owners of this land and a nation that would rather impersonate ostriches than effect real change for the good of this nation as a whole.

The truth is, Australia cannot flourish until the past is properly acknowledged, reparations are extended and hurts are healed. And this cannot be achieved without empathy.

Understandably, most people cannot perceive the Indigenous experience, having lived their lives so far removed from it and having not learnt the truth of it. For those people consider this:

You are in your home on a beautiful parcel of land. You and generations before you have invested blood, sweat and tears into this little piece of paradise you call your own. You look around and smile as you remember that tree you used to climb with your siblings; you remember the family gatherings to celebrate life, loss and all manner of occasions. You view this piece of paradise as more than real estate because it has sheltered you through heart break, through hardship and through loss of generations long gone.

Then imagine someone arbitrarily forces you from your piece of paradise without explanation, telling you that it is no longer yours, you have no legal rights to redress the situation and you have no means to start over.

How would you feel?

If you are more adventurous, let us consider the latter exercise in empathy.

Picture a community of people joined by culture, custom, family and a love of land so connected to the people and the people to the land. The land has protected the people by providing abundant resources and the people have cared for the land by not abusing the abundance and only taking what was absolutely necessary for survival. The relationship between your people and the land was so harmonious that the people would recognise the signs in nature that the land required care in the form of backburning to protect native animals from devastating lightning based fires and when hunting locations needed to be changed to ensure that the scales of abundance were never tipped beyond a precipice of balance.

Imagine  the land was so sacred and loved by your people there were special sites where you would hold sacred marriage and birthing rituals, bringing more love and beauty into the world.

Imagine then that some people you have never perceived, let alone met, came along and communicated in violence; forcing you from your home lands and killed many of the people in your community who dared resist their removal from the sacred lands. Imagine the people in your community were enslaved, raped and murdered because they were considered less than human. Imagine you became pregnant as a result of intercourse with one of the intruders and that child was stolen, never to be seen again.

Imagine the massacres, murders, rapes and genocidal policies perpetrated against you are referred to as a "black armband view of history”. Imagine you are told to just “get over it”.

Empathy is the key element of progress has been missing and we need to use it to progress uniting our peoples.

The experience of the Indigenous people of Australia is greatly varied; whether they be now living in urban communities or remote communities; whether their ancestors were at the forefront of the settler wars or whether they experienced the atrocities much later – what unites the Indigenous people is the duty we have to advance the position of our people in Australia. We hold this duty because of the sacrifices made by our ancestors. We hold this duty because of the resistance of our elders and ancestors.

We have the benefit of hindsight.

We know Constitutional change will not bring about the progress we have long sought and need to heal.

We need Indigenous people to be a part of the process; a part of the decision making and to have the Australian government accountable to the terms of a document mutually drafted, agreed and bound to.

We need a treaty.

I will be one of the First Nations women speaking out for a Treaty at the Redfern Community Centre on Friday 20 March 2015 at 6pm. Also speaking will be revered Indigenous elder and trailblazer, Rosalie Kunoth-Monks; fantastically talented artist and activist Amala Groom, passionate and insightful Amy McQuire, as well as along with myself . Please come along to show your support and engage in this very important discussion. You can follow Natalie Cromb on Twitter @NatalieCromb.

Averse to RWNJ's? Then support progressive and independent media! Subscribe for a steal and be rewarded: #auspoI https://t.co/6h2ToSM9FJ

See below for the press release issued to IA for this event: 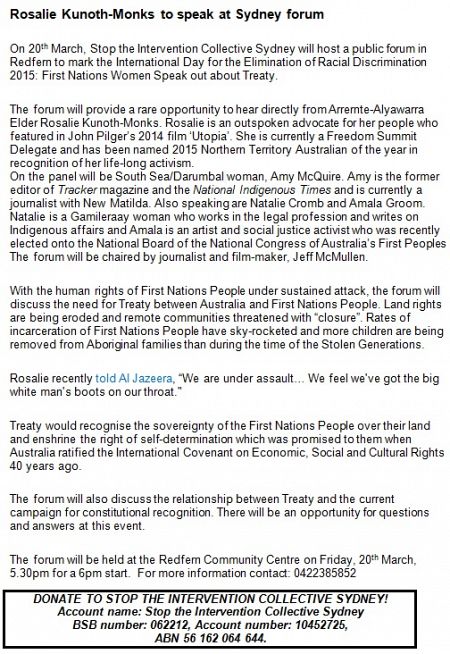