It has been sometime since I felt strong enough or, indeed, was interested enough, to peruse the personal website of Professor David  Flint, the great friend of such headlines grabbing luminaries as Alan Jones and Cory Bernardi.

Strange isn’t it, most people would run a mile to avoid both but the good Professor is usually in rapture at the mention of either poisonous name.  But to each his own.

I have to say, David Flint doesn’t disappoint, and his latest rave is certainly eye-grabbing in its absolute impertinence. I mean, how dare Nicola Roxon express a view  shared by most Australians ― that she is looking for the right opportunity to invigorate the debate about removing the crown from the Australian constitutional system.

Flint started his dummy spit by telling a corker.

He says, and I quote:


'ACM is not a political organization and it is unaffiliated with any party. We have never even recommended how supporters should vote in elections as other organizations have.'

He then reminds us that the position of the nation’s first law officer is of critical importance to the governance of the nation. Then, another corker ― and again I quote:


'There is now great concern across the nation and in government circles about the performance of the incumbent, Nicola Roxon.'

I guess Alan Jones, Cory Bernardi, the Opposition’s crone in residence, Bronwyn Bishop, and the fruity-tongued member for Indi, Sophie Mirabella, amongst others, have been whispering in David’s ear.

For an organisation under Flint’s total and absolute control, and which he claims is not in any way political, he sure makes people wonder.

He is as snide as snide can be in denigrating the Attorney-General for wanting  the crown removed, he reminds his readers this is the same crown to which she has more than once pledged allegiance.

Well, that’s right, and it’s a disgrace in this century that holders of public office are obliged to make such a pledge to such an irrelevant system; such an antiquated and insulting old word habit. Why successive governments haven’t take the bull by the horns and changed it staggers the mind.

Until this happens, all ministers will need to demean themselves and, in most cases, place their tongues firmly as they do.

Flint claims Roxon sees no conflict of interest in Roxon putting her opinion  on the back-burner while she is A-G. He obviously doesn’t like her honesty.

He has tippy-toed through speeches she made while a member of the then Opposition and he came across a Roxon pearler that really got up his nostrils. She called on republicans to apply the blowtorch to constitutional monarchy and warned any recalcitrant Labor MP who dared have second thoughts about the republican agenda; she insisted that being a republican is a core condition of membership to the caucus.


Goodness, David, she sure has balls doesn’t she? Not like your mate Tony Abbott, a former director of Australians for Constitutional Monarchy. And for such an avowed monarchist, Tony is a bit of a dictator ― he won’t let his MP’s have a conscience vote on gay marriage.

But back to Flint and Roxon.

He seems to be outraged that she says we definitely need to sharpen our attack on the institution of monarchy pointing out what is axiomatic ― they are such an easy target.

They made themselves an easy target first when the Queen took the wrong advice to allow the TV stations to film a day in the life of the royals and, by so doing, strip away the mystique and fantasy which set them apart from their “subjects”.

It was all downhill from then on, culminating when Rupert Murdoch got hold of those Charles and Camilla tapes and we heard  the prospective monarch breathlessly telling his then mistress, while he  was still married to his gorgeous Diana, that all he wanted to be was her tampon. He lifted romanticism to new dizzy heights!

Nicola further outraged the good professor by saying said suspected those who developed the constitutional monarchy:


'...would turn in their graves, I suspect, were they to see the likes of David Flint or Tony Abbott suggesting that their compromise was the final destination for democratic progress.'

Then her tongue went firmly back in cheek, and I suspect she was having a lend of David Flint when she remarked that the monarchy  was not suggested as an option in Timor, Afghanistan  or Iraq. 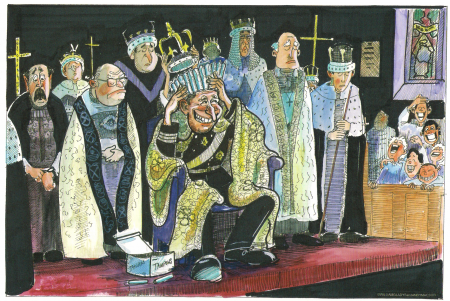 Of course, Flint swallowed it hook, line and sinker. It set the Australian representative of all things  royal and ancient blowing on all cylinders ― hair pins would have been flying wild.

He bellowed: restorations were proposed in Afghanistan and Iraq (apparently, he wanted those Mickey Mouse monarchies restored) but the heirs to the toppled thrones never did get the call to come back. And, according to Flint,


'...there were even some suggestions that East Timor become a Commonwealth Realm.'


'… imagine if instead of Xanana Gusmao, the East Timorese had to rely on Sir John Kerr, as the representative of a distant foreign monarch, to restore order.'

'One shudders at the thought', she rightly said.

Then, of course, Flint goes totally over the top by saying it is reasonable to conclude that Ms. Roxon is toying with changing our ancient and successful constitution by adapting it to the East Timorese model.

Flint sure got that right and, along with Roxon. the majority of MP’s on all sides of politics would agree with her.

Of course, this weekend in Hobart, Tasmania, the Republican Movement is heading for a renascence ― more of that in my next post.

Meanwhile, I hope ACM keeps Professor Flint in his current role as keeper and chief spruiker for the continuation of a non-elected, non-Australian, non-resident, foreign head of state.

It will make the republicans' task much easier.