Getting the Order right for Tendulkar

Senior correspondent Barry Everingham wishes the mainstream media would do their research about the decision to award Sachin Tendulkar an honorary Order of Australia. 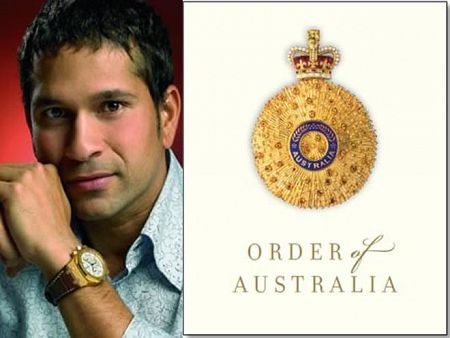 THE DECISION to invest Sachin Tendulkar with an honorary Order of Australia was right, in spite  of the egregious Alan Jones hissing away that it should never been made ― Jones is sounding more like his bosom buddy, David Flint, every day.

But I do wish before the mainstream media would get the story right and do some homework.

I hate  to sound pedantic, but here goes anyway.

First the decision to make the award was not Julia Gillard’s; it might have been her idea, but she would have had to run it past Governor-General Quentin Bryce who, on behalf of her boss in faraway London, would have had to have agreed. Of course, in reality, that wasn’t  a problem. Her Excellency knows the form and so does the Prime Minister. Tendulkar will be invested, I would think, by our High Commissioner in New Delhi who, after all in reality, is appointed by Ms Bryce.

So having got that one out of the way, some thoughts about the Order  of Australia, which thankfully replaced the redundant and anachronistic Imperial Honours system of Britain’s. A system that has been trotted out, incorrectly in my view, on at least two occasions. One, when David Smith was knighted for being the Official Secretary to Governors-General for more years than anyone could remember and just doing what he was being paid to do handsomely.

Then there was the outrageous top of the tree Order of Merit Elizabeth II personally awarded to John Howard, presumably  for his fixing of the Referendum which the Republicans lost all those years ago. If ever he is tried for the crime of destroying Iraq on the orders of George Bush the Lesser and the giggling two-faced Tony Blair, it’s to be hoped the Order will be negated.

To make absolutely sure the citizenry is perfectly aware we are still a colony of Great Britain’s, the following should be noted:

The Governor-General is the Chancellor of the Order and the Principal Companion in the General Division.

At least, and I am translating this from the archaic  English used in the official  description ― the GG on behalf of EIIR, makes the appointments. Obviously, we are not adult enough to use our own  discretion as to who or who is not eligible.

Now, the Order is broken up into several divisions, namely:

Companions: awarded for eminent achievement and merit of the highest degree in service to Australia or to humanity at large. Only 25 are awarded in each calendar year.

Officers in the General Division: replace “eminent” with “distinguished”.

Members in the General Division:  replace “eminent” and “distinguished” with “high”.

Medal of the Order of Australia: replace all of the above with “worthy”.

There are separate awards for the Armed Services.

It seems to me, in this egalitarian country of ours – where all citizens are more or less considered  equal – it might be more in keeping to have just an Order of Australia ― stop, finish.

The lollipop men and women who, in all weather, man the crossings twice a day when schools are open, so our kids can cross the road safely.

The thousands of volunteers who are heroes fighting bushfires and their counterparts who safeguard our beaches.

Let’s also not forget those men and women who volunteer to help out in hospitals ― the list is endless. This is not to leave out the many people who give millions of dollars to charities of their choice. They too are often forgotten  heroes.

So instead of AC, AO, OAM, and so on, let's not single out the worthy ― just an  OA would be recognition enough.

In France, recipients of the Légion d'honneur wear a rosette to distinguish them, and French police when approaching a citizen with the rosette always, without exception, stop to salute those honoured.

We have honoured many non-Australians with honorary Orders of Australia; most countries who award honours, including the French, have the mechanism to do the same.

Tendulkar is a hero of the cricket world, at least the equal of Brian Lara, who received the same award several years ago; his award was well earned.