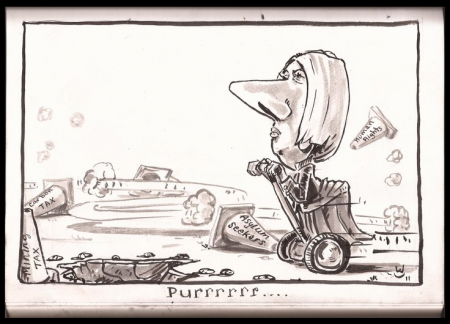 The reason why a majority of Australians aren’t supportive of Julia Gillard’s Malaysian solution to the asylum seeker crisis is because it’s inhumane in the eyes of left-wing voters, whilst being ineffective and compromising national security in the eyes of the right.

The prime minister should eat a big piece of humble pie and admit that re-opening Nauru is a more acceptable and pragmatic compromise in the eyes of most Australians – even if it is far from being a perfect solution – now it has signed the United Nations Refugee Convention — something Malaysia has not done.

Meanwhile, Tony Abbott must stop being objectionable for the sake of it and admit openly that the former Howard government failed miserably the first time around to ensure that Nauru was equipped to handle an influx of asylum seekers and process refugee claims in a quick and timely fashion, without potentially compromising national security by allowing people into Australia suspected of being involved in any terrorist movement or just having a dubious criminal history.

The fact is, the asylum seeker issue is a tightrope balancing act, and a compromise needs to be reached between having compassion for the majority of asylum seekers who are good eggs, while at the same time retaining a border protection policy that keeps the bad elements, who are not genuine refugees, out of Australia.

Refugee children shouldn’t be tossed around like musical chairs, or holed up in inappropriate adult detention, or separated from their parents at any time. Yet, that’s what’s on the cards if the Malaysia solution is adopted in the form the Gillard government has indicated will be the substance of an imminent agreement with the Malaysian authorities.

The Greens, for their part, have adopted a typically impractical far-left policy on the asylum seeker question. They refuse to acknowledge that it is not good policy to have every Tom, Dick and Harry rocking up to the Australian shoreline demanding to be let into the country as a refugee, no questions asked. We need to have a system in place which shows great humanity to asylum seekers, but at the same time doesn’t make Australia a soft target for drug peddlers, terrorists and other criminals who would never be granted Australian citizenship in a million lifetimes if they went through the normal channels to get here.

Clearly, the open gate asylum seeker policy that Bob Brown and the Greens have is not in the national interest, while at least Gillard and Abbott are both trying, in their own ways, to come up with a workable solution that addresses this vital and sensitive question.

Meanwhile, the main issue that needs to be addressed is not so much where asylum seekers are held but how quickly their claims for refugee status in Australia are processed. Five to ten years in detention, as was frequently the case under Howard’s Pacific Solution, is simply far too long and is a beach of these unfortunate individuals’ human rights.

Something for Julia and Tony to think about.