Turnbull's #Innovation and #IdeasBoom is to flog fossil fuels. KaBOOM!

Transitioning the economy away from fossil fuel dependency is now the global catchcry. So why is Turnbull funding DICE-y coal technology at the expense of renewables whilst claiming to mitigate climate change? Mining reformist, Tracey Anton reports.

CLIMATE CHANGE has quickly become an economic and energy policy nightmare for the Government, but what Turnbull is presenting to the public is based on deceit. The LNP’s mishmash of policy contradiction and current economic mismanagement of fossil fuel extraction is set to defraud the public of billions of dollars.

“... we transition from an economy that has been fired up by an unprecedented mining construction boom as we transition to the new economy of the 21st century.”

The great disparity between saying you will reduce emissions but then stealthily grow a new and bigger fossil fuel industry needs to be called out and exposed.

We already have LNP’s ongoing team assault on the environment, now showing a jump in emissions since the removal of the carbon price in 2014 with increases in liquefied natural gas (LNG) greenhouse gases adding to the rise. 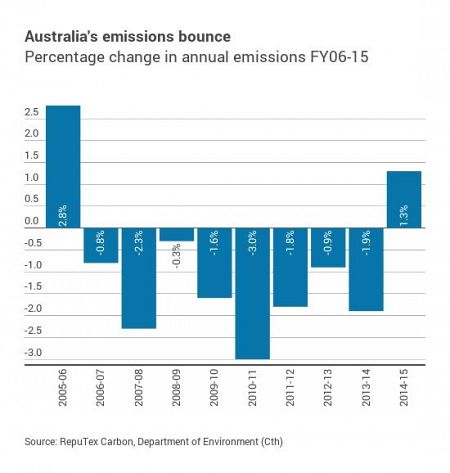 Worst still is the report by the Grantham Research Institute on Climate Change and the Environment. Due to the LNP’s continual backflip and integrity of Turnbull and Co to apply believable climate mitigation strategies, Australia is way down the list for credibility to implement policy commitments.

Check Australia: 4th from the bottom: 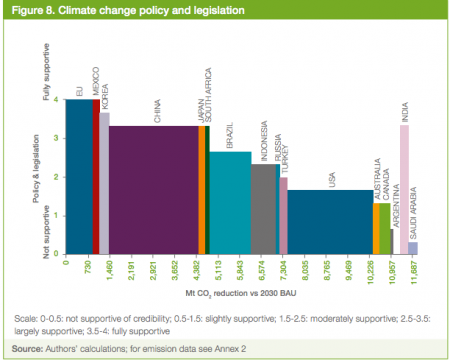 Currently, the taxpayers will be shelving out billions of dollars to facilitate and subsidise a burgeoning fossil fuel energy future and the pain will only get worse if the Turnbull government is returned.

As reported this week in The Conversation by Christian Downie and Howard Bamsey in an article entitled 'Election 2016: Do we need to re-establish a department of climate change':

Climate change is arguably the greatest economic and security threat that Australia faces. As a result, it demands proper representation within government.

The Emissions Reductions Fund uses public money to reward polluters to emit less while doing nothing to reduce overall emissions. Now, Turnbull is considering further funding in future budgets because there just won’t be enough in the coffers to pay polluters to stop polluting.

The Australian Industry Group, which represents more than 60,000 businesses, including those in transport, manufacturing and mining supplies, said if the Emissions Reduction Fund was the sole method used to reach the target, this would cost between $100 billion and $250 billion in nominal terms in the decade to 2030.

Mining industry’s influential lobby group, Minerals Council of Australia (MCA), still has new coal technology and export at the top of the list along with carbon capture and storage (CCS).

CCS is just another way to facilitate the growth of fossil fuels industry. It is also to trick the public into believing this is credible mitigation to capture harmful emissions except that any contract commitment would destine areas like Gippsland to another 40 years of coal. Where’s the logic in that?

In an earlier article in December in The Conversation by Sarang Supekar and Steve Skerlos, entitled 'The latest bad news on carbon capture from coal power plants: higher costs', they write:

‘… the concept of carbon capture and sequestration (CCS) is unlikely to provide an economically viable solution to CO2 pollution from coal-based power generators.’

Keeping the coal in the ground is not only the most economical way of reducing carbon emissions, it is a sure way to save thousands of lives every day due to cleaner air. It is a classic case of “prevention,” through decarbonisation of energy systems, being better and cheaper than the “cure” of CO2 capture.

Under a CCS future, a quarter of a trillion dollars of taxpayer monies as a top marker is looking a more reliable figure.

The crazy thing is, to capture CO2 there needs to be a price placed on carbon. Oh, the irony!

As for new coal technologies, coal still has to be extracted so the pits get bigger, groundwater is still bleed, air pollution is increased, waste water still needs to be disposed of and land and coastal subsidence will worsen, and the cycle goes on.

We already know that the mining industry is dictating Government policy, but the infiltration of agencies and our main science and research organisation, CSIRO is concerning.

CSIRO is now one of "entrepreneurial" innovation to market technology to the world.

In an interview in February 2016 with Leigh Sales on 7.30, CSIRO's CEO Dr Larry Marshall stated:

"… To grow our agricultural industry, we need to double our water usage. What technologies do we need to invent to do that?”

The innovation that he wants to sell to the world is the DICE technology, a coal to fuel derivative that starts with turning prime agricultural land into an open cut brown coal mine. How is that to mitigate climate change? Worse, the technology is also water and energy intensive — so it can burn cleaner somewhere else. Meanwhile, Turnbull has to build more dams because he is giving all our precious water to mining.

'John White chairs the DICE network of companies and agencies developing the technology, and is an executive and founding shareholder of Ignite Energy Resources,(IER)'

'..It halves CO2 emissions and will be eligible for Emissions Reduction Funding under Direct Action policies.'

Not only was White in financial trouble prior to receiving over $20 million in "grants" for the DICE project but he had also incurred a loss of $6 million in the 2012 calendar year.

White is an old Liberal heavyweight, who was former Prime Minister John Howard’s right hand man in developing the Uranium Industry Framework for Australia’s nuclear future, and just happens to hold dominion over thousands of square kilometres in Gippsland through the company he is shareholder and founder of, Ignite Energy Resources. He also has an uncanny knack of developing new coal technology, which will reward him benefits under the Coalition’s Direct Action climate policy, upon which he advised.

Then there were the concerns over a $3 billion port in Gippsland when White, allegedly, was head of the (GRID) panel on transport infrastructure. That would go with his planned open cut coal mine in the groundwater depleted area of Gelliondale.

Next, was the inclusion of biomass (another "clean" energy project) in the Renewable Energy Target securing White feedstock from our Gippsland forests. Now, he is telling government that his Gippsland Gas project will provide an abundance of "clean, agricultural quality" extracted water from his proposed biogenic coal gas project in the water stressed area of South Gippsland. Simply put, it is coal seam gas with the same destructive intrusions and the same hazards.

White’s most grandiose venture was to produce nuclear energy for the world by turning uranium into nuclear fuel rods, leasing them and bringing back the waste (including plutonium from the U.S. weapons industry). It's interesting that Ignite holds leases for thorium adjacent to the iconic Ninety Mile Beach in Gippsland. Thorium – uranium’s young sister – is hailed by nuclear proponents as the green energy source of the future.

Only problem is, its exploration and mining is banned in Victoria. Bizarrely, when IA's Sandi Keane and I reported on White's involvement in Ignite ('Victorian government ignores Gippsland gasfield concerns'), the Minerals Council of Victoria rather stupidly tried to get the article pulled. They claimed we'd got the WRONG John White. We didn't. It was a desperate act by MCA. You can find the whole story here. It seems the reason they wanted us to pull the article was because they'd applied to the former State LNP Government to have the legislation banning exploration and mining of thorium and uranium repealed, and didn't want White's name mentioned. Welcome to the shadowy world of Dr White.

So, here’s the dilemma for Turnbull as we move forward into a predicted drier climate.

If, as he has stated:

how the hell is he going to fill all the dams if it doesn’t rain?