Who's really behind the latest amendment to the Fracking Ban Bill and who will benefit most from undermining it? Tracey Anton reports.

WHILE OUR Victorian farmers continue to seek rational resource planning and much-needed mining reform for landholder rights, the onshore gas debate has heated up dramatically with farmers feeling betrayed and used by the Shooters Fishers and Farmers Party (SFFP).

The Resources Legislation Amendment (Fracking Ban) Bill 2016 – which bans all forms of unconventional onshore gas exploration or extraction and imposes a moratorium on conventional gas exploration until 2020 – was successfully passed in the Victorian Lower House on 9 February 2017, with the support of the Coalition. It is now up for debate in the Upper House on 7 March 2017.

The Andrews Government and farmers thought common sense had finally prevailed, until SFFP MP Daniel Young stated in his media release that he will:

' ... introduce an amendment [in the upper house] to remove the legislative moratorium on conventional gas exploration … and seeking discussions with the government to resume operations.' 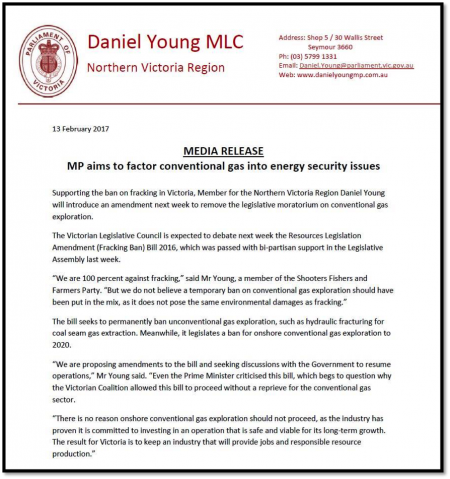 Seeking support for his motion, SFFP spokesperson Daniel Young unwittingly opened a Pandora’s box, dragging other upper house MPs into his scheming. Was it gameplaying by the Liberal powerhouse and mining industry lobbyists, who want to use the inexperienced MP to get the conventional gas exploration moratorium until 2020 removed from the Bill?

As many other MPs have now come out in support of the Bill in its entirety, who was to benefit from such an ill-informed motion and why didn’t Daniel pull back when he was inundated with irate Victorians?

Farmers are furious with him, principally, because he has heard in detail the anxiety and uncertainty that onshore gas poses to their business operations as part of the Environment and Planning Committee’s Inquiry into Onshore Unconventional Gas in Victoria. Now it appears he also has selective hearing because he has chosen to ignore the very graphic and factual information about the environmental degradation caused by the conventional oil and gas industry, which is already borne by farmers.

Removing the conventional moratorium from the Bill takes away legislative weight and makes it is just policy — open to abuse and free from scrutiny, just what the mining industry wants.

And, as his media release indicates, Daniel Young has fallen for it:

“There is no reason onshore conventional gas exploration should not proceed, as the industry has proven it is committed to investing in an operation that is safe and viable for its long-term growth.”

Western Victorian asks @DanielYoungMP 'whats in it for you?' After shooters want to amend gas moratorium with #fracking bill. #springst pic.twitter.com/YxU4yIcG6C

If the industry is so confident in their work practices and scrutiny of the economic and environmental impacts as well as the estimates of resource reserves onshore, they should have nothing to fear in the three-year moratorium analysis of the gas industry.

In acknowledging the gas ban in August 2016, Young initially states:

'It also provides the gas exploration industry an opportunity to regroup and either disprove the concerns raised or provide solutions to overcome the concerns. If the industry can do that, I would be willing to readdress its proposals.'

So Young will believe evidence from the mining industry that their environmental footprint is small, but ignores mounting evidence and exposure of geotechnical (p 11-21) and hydrology complications in Gippsland, that it is not. With taxpayers bearing the economic cost burdens caused by ongoing poor regulatory framework, compliance and enforcement, he needs to explain to the farmers how the resource legislation can protect our existing degraded environment. He needs to also explain how accommodating a further depletion of the groundwater can at the same time sustain agricultural, tourism and other industry water users.

Two farmers – Trevor and Di Flint from Seaspray on the Gippsland coast – have hosted 23 politicians over recent years, including the SFFP, presenting a business case based on facts against the onshore gas industry. They have been an integral intermediary for other farmers and the government on this issue.

Yesterday (23/02/17) I had a meeting with the shooters, fishers, farmers party and tried to make sense of their madness ...

Over the last five years I have met with so many politicians and department people on the issue of onshore gas in Victoria, and I believe the meeting I had yesterday was the most disappointing and unproductive I've attended throughout this fight.

Daniel Young of the SFFP wants to introduce an amendment on the Resource Legislation Amendment (Fracking Ban) Bill 2016. This whole Bill is about protecting communities, agribusiness, tourism, aquifers and all surface water ways and wetlands. Now Daniel, being a shooter and fisher himself who uses the wetlands and water ways for his recreational activities that he claims he loves so much, cannot see the importance of this Bill as a whole, as he won't look past the cane reeds.

Every shooter, fisher and farmer I have had the privilege to be associated with, fully understands the importance of clean, healthy water ways and aquifers to sustain all our activities. It is now time for Daniel to come out of the swamp and take notice.

What we currently have is an industry that is largely unregulated, its pollution tolerated with minimal monitoring and no worth given to those impacted.

As demand for food and water is growing with increasing population and an expanding mining industry all dependent on the same water resource – be it ground water or surface waters – the SFFP is pitting farmers against miners, with both clearly ignorant of the need for landowner surety on land and water availability. But the granting of a mining exploration licence is the transfer of rights from the Crown to another entity to exploit a resource or hold rights over that licence tenement – for up to 25 years – even in the absence of a resource.

Section 20 of the Charter of Human Rights and Responsibilities Act 2006, under 'Property Rights', notes a person must not be deprived of his or her property other than in accordance with law. This is where the law sucks. For onshore gas, it accords to a speculative and hazardous industry a legal economic privilege that subordinates existing economic enterprises – through the occupation of private property – rendering landholders and communities subservient to the proponent in the absence of any property rights.

While onshore conventional extraction is managed by the Petroleum Act 1998, the actual management of all waters, licences, discharges and disposal is managed by different departments, under different policies, with an ad hoc system of environmental safeguards and frameworks.

Under Young's SFFP model, the ongoing pollution from mining wastewater and aquifer depletion will continue, which is in total contrast to previous statements made by Young about his concern over wetland health and loss of birdlife:

‘Meanwhile, I will continue to do my part in helping conserve and protect our wetlands.’

He just doesn’t get it. Our wetlands in Gippsland are drying up because of mining’s heavy reliance on groundwater reducing freshwater inflows and what water is left, is topped up with mining effluents that have adversely affected the health of the aquatic food webs (fish, frogs, birds) with toxicants (metals, increased sediments and their concentrations).

Add hypersalinity of wetlands in Ramsar vicinities from seawater intrusion, acidity and acid sulphate mobilisation and you have just stuffed your recreational fishing. And what bird wants to breed in a cesspit with no vegetation? So there go your shooters.

Take notice Daniel Young — you can’t have shooting, fishing, farming, or a healthy economy without a healthy environment. Water is the new gold.

Farming versus mining: Is the Andrews Government the new 'country' party? https://t.co/AJ1cNLMD1q @IndependentAus