The burning controversy of the RET review: Australian forest destruction

Though the logging industry claims it wants only “waste” for native biomass fuel, it has lobbied relentlessly for an expanded native forest biomass definition to include - effectively – whole trees, if not entire forests.

For example, the 2009 National Association of Forest Industries (NAFI) submission to the Strategic Directions Paper for National Energy Policy – Framework 2030 asks that any product from any forest managed under Commonwealth or State agreements be eligible to receive RECs if burnt.

NAFI argued these provisions ‘produced perverse outcomes’ and that

‘… wherever forests are managed under Commonwealth and/or State forest management regulations, the products of any harvesting operation should be eligible to produce renewable energy under the Expanded National Renewable Energy Target Scheme.’

NAFI based its argument on the ‘sustainability’ of forestry, implying this self-declared sustainability guaranteed harvesting native forests for biomass power as sustainable, that is: “renewable”.

The logging industry asking that native Australian forest biomass attract subsidies when consumed in furnaces is about creating a market for those supplying the “subsidised biomass”.

The NSW LNP government lost no time passing the Protection of the Environment Operations (General) Amendment (Native Forest Bio‑material) Regulation 2013, whereby, eligible for subsidy when burnt, is any

‘… material resulting from forestry operations carried out on land to which an Integrated Forestry Operations Approval (IFOA) applies under Part 5B of the Forestry Act 2012.’ 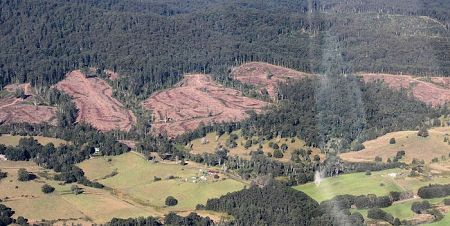 Native forest logging is heavy already, without the added incentive of a subsidy. (Image: Supplied)

This Federal Government’s planned RET amendments mirror NSW regulations. Like the Coalition in NSW, the Abbott Government seeks to re-define native forest waste as any material from any forest harvested under a Commonwealth/state agreement.

Note that AFPA called for government to

‘Coordinate and harmonise state and federal regulation to avoid duplication.’

It seems conservative state and Federal governments can’t comply quickly enough.  They have done so at every parliamentary opportunity to date.

Calling forest biomass fuel a renewable energy is a huge incentive to deforestation.

Economists in Australia have also analysed the facts here, coming to the conclusion this decision will mean more logging.

In instructing the expert RET review panel to consider reinstating native forest biomass eligible for subsidy when burnt, the Abbott Government acquiesces to the Australian timber industry. Should the vote approve this in May, Australian native forests – with all they contain and represent – dangle on a precipice, below which is forest destruction. It sounds like an April Fool’s Day joke, but here’s how it has happened.

(The Renewable Energy (Electricity) Amendment Regulations 2011, which commenced on 10 July 2011, amended Regulation 8 of the Renewable Energy (Electricity) Regulations 2011 by changing the definition of ‘wood waste’ to exclude waste sourced from native vegetation. At present, wood waste sourced from native vegetation cannot be used for the generation of Renewable Energy Certificates (REC), except where the power station was accredited under the Act on or before 10 July 2011. The power station must also have been granted at least one REC from the electricity generated through the use of wood waste on or before 10 July 2011.)

This was important because it prevented acceleration of CO2 emissions — from forest destruction via increased logging, loss of carbon sink function and direct emissions from burning. It also prevented diversion of limited RECs available to the renewable energy sector (based on the Renewable Energy Target) from being directed away from genuine low emission energy production (solar, wind, geothermal, wave etc) to biomass furnaces, emitting more CO2 and other toxins than straight coal. 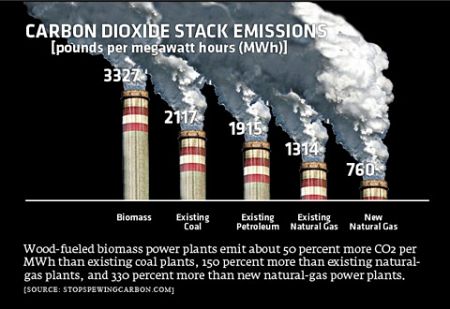 AFPA, lobbying arm of industrialised logging capable of supplying the scandalous  biomass power trade, was exempted from planned industry subsidy cuts when the Federal Government made good on its pre-election promises.

Before the election Prime Minister Tony Abbott advised the timber industry it was a special case, promising AFPA access to native forests and to

“… reverse the exclusion of native forest sourced wood waste as an eligible source of energy for RECs.”

Abbott did indeed “tear up the Tasmanian Forest Agreement”, redirecting $30 million intended for protecting old growth forest from logging, instead to the timber industry as a subsidy to log it and giving AFCA members access to more native forests for “thinning” forests in the name of bushfire mitigation.

‘… material from any native forest harvested under a federal state agreement.’

Legally, that could mean material from most native forests of Australia, not just a few whole trees here and there but entire forests potentially capable of attracting RECs when burnt.

The other ominous ask of big timber, rarely mentioned, is ‘the “evergreen extensions” to existing native forest supply contracts.

‘… long term resource security for the forest and plantation industries through the Regional Forest Agreements (RFAs) renewal process, and development of an evergreen 20 year resource security process backed by Commonwealth and state legislation.’

The industry considers a typical 20 year timber supply agreement commercially limiting. They want twenty year supply contracts to roll over almost automatically, so that twenty year contracts extend to forty years, forty to sixty, and so on.  They want this government to legislate almost perpetual access to Australian native forests.  Profits ensuing from future forest uses ‒ be they energy production, carbon trading or genetic material value ‒ will ceaselessly flow to the corporations via evergreen contracts.

Australia’s forests, all their critically endangered remnant wildlife and the nation’s most important land based carbon sink hang in the balance of a parliamentary vote likely to occur in May, with the intention that the RET review outcome be finalised in June.

What could prevent Australia’s forest destruction is convincing progressive parliamentarians to vote against the panel’s “burning” recommendation — now.  It’s the last hope for forests in any semblance of an intact state; the last hope for the myriad creatures facing the first man made global extinction crisis of this planet.

Note the chilling deforestation facts. In 2009, 70 per cent of Australia’s remaining forests were degraded from logging. That percentage has been steadily rising.

Read more about this issue at nativesrule.org. 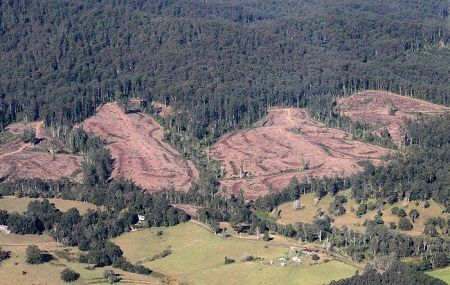 Forest clear felling will increase with the proposed changes to the RET (Image: supplied)

The bad news...the new George Washington Forest Plan has thrown open the doors for logging for biomass in the... http://t.co/S0qAAizvCf

East Australia one of 11 areas to account for 80% of world forest loss by 2030 http://t.co/7bhBP6zlpT #logging #green #australia #shame