America is now cowering to the power of a greedy, dishonest, immoral minority which is transforming it for years to come, writes Sue Arnold.

I'M STANDING in the visitor’s lobby at the Central California Women's Prison in Chowchilla, waiting to be given permission to visit with an African American young woman, who is serving a life sentence for murder.

Yes, it does seem a strange thing to do on a working trip to the U.S. but the young woman is a classic example of the ongoing discrimination against African Americans, which shows no sign of abating.

Her charges should have been manslaughter. One dark night in a well known West Coast city, she had too much to drink and, on the way home, a car with headlights on full came close behind causing panic. Tragically, Anna (not her real name) slammed into another vehicle killing the woman who was driving. Unfortunately, it was the local sheriff’s wife.

Eight years later, Anna is serving a life sentence for murder at one of the most overcrowded prisons in the U.S. with 180 per cent over-capacity — mostly comprised of African American women. Her sentence was 15 years to life. If a white person had committed a similar act, they would be out of prison by now. Anna's chances of getting paroled after 15 years are slim and, as a lifer, she has no rights to education, rehabilitation or any options that would give her the chance to become a useful free human. At 32 years of age, her future is grim.

Criminal justice software algorithm used across the US is biased against black inmates, study finds https://t.co/XKrcjz2nLp

In order to visit with a prisoner in California, it’s necessary to fill in an application form, provide personal details, contacts and any details of previous convictions. Having addressed the paperwork months earlier, I assumed – as did my sister who was with me – that there would be no problem seeing her friend — a friend she’s supported through prison reform groups for almost eight years. I was there as moral support and as an infrequent penfriend to Anna.

Anna had informed my sister on the phone earlier that my application had been approved and there would be no problem visiting. As well, my sister had to fill in more forms prior to our visit to obtain permission.

Before we left, my sister informed me I had to wear a bra without underwire, no jewellery, a long list of forbidden colours, no jeans, no hats, no hairpins and definitely no food, money or gifts. All we were allowed to take into the prison was a plastic bag with a car key and identification.

It’s a two and half hour journey from Palo Alto to the prison, through Central California — heartland of Republicans in a blue state. A large billboard featuring Trump’s Supreme Court nominee, now Judge Brett Kavanaugh, with the words 'Congratulations, Your Honour', is hard to miss. 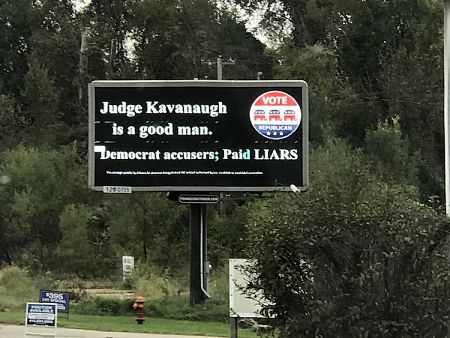 So are the signs with Trump’s picture and his mantra, "Make America Great Again".

This is the same part of California that wants to secede from the State and set up its own Republican dream/nightmare.

LIEUTENANT:There’s no evidence that you have any permission to visit.

ME: But I’ve come from Australia. And I filled in the application form months ago.

LIEUTENANT: Don’t care if you come from China, Europe, Australia or wherever. There’s no approval or application in the system.

ME: But Anna told my sister on the phone that I have been given approval.

LIEUTENANT: The prisoner is lying. Prisoners lie all the time. You need to understand that prisoners tell lies.

It was extremely tempting to respond that, perhaps, she was following the example of the U.S. President whose list of lies is now in the thousands and growing daily. But, clearly, there was no point in arguing and the only solution was to leave.

Given that you can’t get into the U.S. with any conviction record, the refusal to allow me to visit Anna seemed more than petty. My sister told me on the way home that no one who has visited her friend had received any confirmation of approval to visit and her confirmation of today’s visit was also missing. The computer system is completely stuffed. Like the prisons.

It’s hard to believe what’s happening in the U.S. This is a country I’ve visited on a regular basis for around 30 years and I was stunned by the changes. I was there in January and, in ten short months, the atmosphere has drastically changed.

Halloween is celebrated just six days before the mid-term elections, which will decide the future of the nation. Wandering around the many houses and gardens, decorated with skeletons, giant spiders, monsters and dragons with R.I.P. signs in the lawns, I had to wonder if the decorations were a manifestation of what Trump has done to America.

Michael Moore's latest documentary, Fahrenheit 11/9, is now showing in the U.S. and it makes for shocking viewing. Moore is a brilliant journalist and his latest effort is so compelling that I was not the only person in the cinema audience weeping.

His documentary demonstrates a democracy in its death throes, with the only force for change coming from the people. Yet most of the people are ensconced in their bubbles — unless directly impacted by Trump’s policies.

One of the most appalling scenes from the documentary deals with the water crisis in Flint, Michigan, where the children are now poisoned with lead and toxic chemicals resulting from an extraordinary effort to cut off clean fresh water to the population.

Lead has disastrous results on young brains and there’s no possibility of reversing the damage. Kids have skin diseases, infections, and people have to buy water they can’t afford to drink and to do their washing.

It was heartbreaking to watch the efforts of the townsfolk attempting to change the situation. Shades of the failure of politicians in Australia to listen to the voting public.

"You already took my dignity, what more can you take?" Tia Simpson is a Flint, #Michigan, resident who's speaking up about the water crisis in her community. We have to #UniteTheVote on November 6 because our health and lives depend on it. pic.twitter.com/bjinIdCwoI

Republicans are leaving no stone unturned in their efforts to prevent likely Democrat voters from getting voter registration. In North Dakota, Native American Indians who live on reservations use Post Office Box addresses as they have no mail delivery and no street address. No street address, no voter registration. The Republican Party has now denied thousands of American Indians the right to vote on these grounds alone.

If your name on any identification card, such as a driving licence, varies in any way to how your name is listed in state documents, no voter registration card can be issued. The same thing applies if there’s any “peculiarity” in your name, such as an apostrophe or a hyphen, or the name sounds “strange”.

People generally stay silent if you ask, as I did, about politics or who they intend to vote for. But I didn’t find a single person who claimed support for the Republicans — although I didn’t take a poll in Central California.

In spite of all the ominous signs, California is booming. In San Francisco, buildings are going up everywhere, cranes dot the horizon, there are massive road-works and infrastructure. Traffic congestion is now commonplace, and there are crowds of people at markets and shopping centres.

But there’s a definite sense of doom and those that are aware seem really terrified of the future and any Republican win in the mid-term elections. The world’s greatest democracy is now cowering to the power of a greedy, dishonest, immoral minority, which is transforming America for years to come.