Has Prime Minister Abbott and his office been misleading the public about his decision to restore imperial honours, compromising – and also offending – the Queen. Senior correspondent Barry Everingham suggests they have.

YESTERDAY, Jonathan Swan and Peter Hartcher threw doubt over Prime Minister Tony Abbott's dealings with the Queen over the knights and dames issue in a piece published in the Sydney Morning Herald.

At the same time they were investigating this topic, I was also independently looking into this same issue and can now provide more information.

In summary, it doesn't look good for Abbott.

Swan and Hartcher summarised the background as follows:

Tony Abbott announced last week that Quentin Bryce had been made a dame and Peter Cosgrove a knight. But had they really?

The Prime Minister's surprise statement began: "On my recommendation, Her Majesty the Queen has amended the Letters Patent constituting the Order of Australia."

Letters Patent are the official instrument, the parchment signed by the Queen's own hand with her distinctive "Elizabeth R", that give force to her decisions.

But, mysteriously, although they are public documents published in the Government Gazette, no one has been able to provide evidence that one was signed.

Or show that the Queen had signed the parchment at the time of the Prime Minister's declaration.

This raises an awkward question. When Mr Abbott publicly pronounced Ms Bryce a dame in time for her official reception on March 25, was she? General Cosgrove started using the title Sir on March 28 after his swearing-in as Governor-General, but again was he officially allowed to claim that title?

The PM seemed to imply by his statement he had conferred directly with the Queen, however when Abbott called the Palace, my sources say he did not speak to the Queen but rather to one of her senior aides.

Abbott allegedly advised the aide that he was "restoring" a "truncated" (his words) part of the Order of Australia.

And, despite Abbott's announcement, the subject of the Letters Patent was apparently not mentioned at that time but arose later, when the legality of his unilateral decision had time to sink in.

When I contacted the PM’s press office – the most arrogant, secretive and insulting PM's office I have ever had the misfortune to deal with in my several decades as a journalist – they refused to comment and, indeed, slammed their phone down in my ear.

Hartcher and Swan did manage to speak the PM's office:

After repeated requests over several days, neither the Prime Minister's office nor Buckingham Palace would give Fairfax Media the exact date on which the monarch signed the official instrument.

On Wednesday afternoon - after Fairfax Media published this story online - a spokeswoman for the Prime Minister said "the documents" had been signed by the Queen on March 19.

But the Prime Minister's office continued to refuse to release the signed parchment, saying the Letters Patent, which are public documents, would be published "in due course".

My enquiries strongly suggest Tony Abbott bypassed the usual channels when he announced he had decided to reinstate imperial titles in the Order of Australia.

The normal accepted practise in such matters is that a joint announcement would come from the PM’s office and the Palace and they would issue a simultaneous release.

This would be followed up by a confirming announcement in the Government Gazette, which it did, but in this case no one seems to know if the Queen signed the necessary papers — and, if she did, when did she sign and where is the original?

When I called Government House, they refused to comment. In my experience, this means they were left totally out of the loop.

I then called the Palace to ask about Abbott's decision. I received a similar response — though the anger in the royal aide's voice was palpable.

I asked the Palace whether the titles conferred by Abbott were legal at the time he made his announcement.

I was coldly told that Abbott doesn’t confer titles, the Queen does, so I should ask Mr Abbott whether everything was legal.

Swan and Hartcher's enquiries suggest it was not legal:

The spokeswoman had earlier said that an "electronic version" had been sent and signed in mid-March and that the signing of the paper version was "under way".

However, there is no electronic version of Letters Patent, according to people familiar with Palace workings, and only the parchment bearing the monarch's signature has any force.

An email exchange, in other words, may be no substitute, nor carry any official weight.

According to my sources, when the Prime Minister Tony Abbott grandly announced he was restoring knights and dames on 25 March, nothing was set in stone. In short, he lied about the Letters Patent.

And there is no such thing as an “electronic" Letters Patent — like the honours themselves, the “Letters” are a relic of another day and age.

Abbott has second guessed the Queen, which would be, in the eyes of the Palace, simply unforgiveable.

His office is now spinning desperately to try to get him out of trouble, but this merely illustrates what a mess this impetuous prime minister creates by going it alone — as he so often does.

The damage he has wrought is significant.

Firstly, his arrogance in bypassing Government House in Canberra, which he obviously did, will cause unnecessary frostiness there.

As for his Liberal Party colleagues, some 40 per cent of whom are republicans, most are privately furious he did not consult them about this move.

Despite being an avowed – one may say, obsessed – monarchist, Abbott has caused major ripples in the Queen’s office. It is a brave – indeed insane – prime minister of any country who would try to second guess Queen Elizabeth II;  when it does happen, the offending politician is usually soon put back in their box.

And as to whether former Governor-General Quentin Bryce is really now a dame and Peter Cosgrove a knight?

No one seems to know. 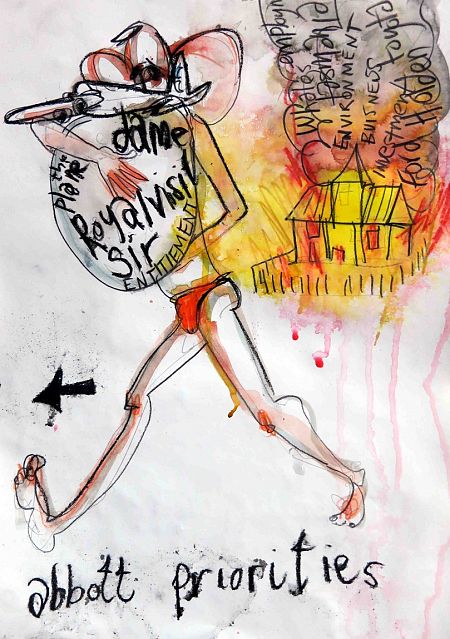 2 March 2015, 8:00pm Senior correspondent Barry Everingham says IA should be supported, because it has ...
Join the conversation
comments powered by Disqus
Daily news
Get FREE daily updates from IA to your inbox.
Just in
SHOP AT IA