Tony Abbott is a shallow narcissist, who has surrounded himself with likeminded buffoons and is supported in his moribund neoliberal agenda by a similarly vacuous mainstream media, writes Dr Martin Hirst.

TONY ABBOTT has been Australia’s prime minister now for 630 days.

And what did he do to celebrate this Sunday?

He went on a “charity fun run“, just like he’s done for several years.

I am struggling to find evidence that even one of those long 630 days was spent in the service of the country he claims a mandate to lead.

All I have seen of our Dear Leader is a man intent on pandering to his own personal whims and the causes of moribund neoliberalism.

How many times over the past nearly two years has Tony Abbott donned the lycra, or the budgie smugglers, or the running shoes to demonstrate his Putinesque qualities and his hard-man physical prowess? 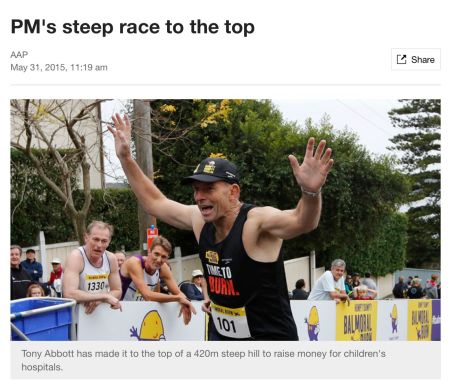 Has this man got nothing better to do than exercise (Image screenshot au.news.yahoo.com)

It’s been too many days in my book, and certainly enough to make it look like Abbott is a narcissist who has not really grown out of his teenage years. He still seems to live in the days of student politics, when he could ignore democratic procedures and run a student union like his own personal fiefdom.

In those days, Abbott played to his loyal fanboys — the rugger buggers and college thugs. He still thinks this is his main constituency today.

This is now what Abbott is doing the the country. He plays to the fanboys — the racists and the fearful.

I guess it starts and finishes with the Pollie Pedal, which Abbott has been associated with for 17 years. He was a founding member in 1998 and has ridden at least part of the route in most years since. Since the election in September 2013 Abbott has often been seen in lycra cycling around various capital cities and he continues like the vain MAMIL that he surely is.

But the ride is not about charity for Abbott as it appears that he has claimed a travel allowance of $350 per day at least once or twice over the years.

'Over the years Abbott and his staff have claimed tens of thousands of dollars in travel allowances, car-related costs and airfares while riding in the Pollie Pedal. At least once, Abbott’s staff have been paid travelling allowances and other costs for attending.'

If it was for charity, Abbott would do this out of the limelight, or at least encourage the doting media pack that follows him around like a clutch of stupid puppies not to make a fuss.

But that is not Abbott’s way. He always likes to be front and centre, particularly if there are cameras involved.

And, more importantly, he wouldn’t pose for the cameras and then rip funding out of services for the very same group that the “charity” is supporting.

The man who just stripped kids with metabolic disorders of their special food grants does a fun run for sick kids pic.twitter.com/ZD6IeFBCeY

But it is Abbott’s Catholic character to promote “charity” as a solution to problems that governments should be addressing. Government action goes against the grain of his neoliberal economic upbringing. Slashing and burning the public sector in health services while glibly promoting “charity” is no way to govern, it is no more than ego-stroking onanism.

Action man in action. Only one shot is not PM Abbott

Abbott uses his bike-riding as a political tool, it is not just a hobby for him. When things are not going too well, or if he needs to distract us from some new act of idiocy by his Government, out comes the lycra, the wetsuit or the runners again. That’s why he went to Geelong in January this year, a time when his political stocks were sinking. It’s why this Sunday he was out running for office again.

The Murdoch press laps it up, but even they have to keep some faith with readers and admit it was a stunt (news.com.au, January 31 2015):

AUSTRALIA’S lycra-loving leader got back on his bike this morning, trying to ride out the storm after a rough week.

It seems that psychologically, the lycra suit has become a sort of body armour for Abbott. He feels safe among the boofy blokes playing with their expensive toys and he doesn’t have to face any difficult questions either while he’s out on the road.

The TV media loves Abbott in his lycra, it gives them colour and movement and it’s an easy story to file. No hard thinking required; just vocalise the media release and a stupid pun or two, get some action shots and it fills a couple of otherwise dead minutes in a news bulletin.

But for the serious print journos, it’s a bit harder.

Earlier I described Abbott as “Putinesque”, it seems I’m not the only one making that comparison, but in the ruling class magazine Business Review Weekly, such unflattering suggestions are not welcome.

Why not? Well according to BRW‘s well-informed scribes, Abbott is “the real deal”.

Abbott has a particular fondness for letting it all hang out. We’ve all seen him emerging from the surf in his indelicate bright-red Speedos, as mercilessly lampooned by cartoonists who now routinely depict him in his aquatic smalls.

There is no suggestion that Abbott has contrived his action-man persona as part of a carefully orchestrated media campaign in the way that Russia’s he-man President Vladimir Putin has done. Abbott is the real deal, no doubt about that, but it’s also clear that the putative prime minister, like Putin, believes his image is a positive with the electorate and the media.

Really, 'no suggestion' that the 'action-man persona” is “contrived'? None?

If not, then, it is as I feared: Abbott is full of self-love and a belief that he is the leader Australia needs today. The carefully crafted macho image, then, is Abbott’s core, it is not a mantle he wears to disguise his true self from the world.

He is the WYSIWYG Prime Minister.

And than can be no more wysiwyg than seeing Abbott on the beach in his red speedos.

We’ve seen Abbott parade his manhood along the Corso; we’ve seen him waddling along beside awkard-looking international leaders; and we’ve seen him in a wetsuit, doggedly paddling a longboard into the swell.

I don’t know, maybe there’s a kinky fetish lurking inside this former alter boy and trainee Catholic priest. Not only does he like dressing up (or down) in lycra and rubber, he even gets his kicks watching wetsuits being made. 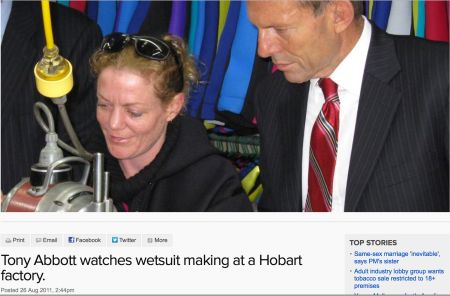 Abbott is at his most serious when playing dress ups. He likes the hairnet look, the lab coat, the hi-vis vest and the “I’ll have a go for the cameras” swagger. We’ve seen him boxing up samples of stuff; digging holes, hammering nails and taste-testing the farmer’s produce — but how often do we actually see him running the country?

Lugger bugger, TA can carry a box and carry off the rugged worker look

And when he is running the country, in whose interests does he govern?

Well, we don’t have to look too far for answers. Just cast your eye over the “Pollie Pedal” pics again. Can you make out the word "AMGEN" on Abbott’s bikewear?

Amgen is a U.S. big pharma company and a major sponsor of the Pollie Pedal. This is just a little bit ironic since one of the drugs that makes Amgen a small fortune is EPO – the favoured drug of cycling cheats.

Just remember Amgen and Abbott when you’re reading about the TPP deal that is being negotiated behind closed doors in the coming weeks.

Remember Amgen when your PBS medicines become too expensive for you to afford and your health suffers.

Abbott is the Prime Minister for big business, not the likes of us.

This is also the persona that Abbott takes into all his policy deliberations. He is the Prime Minister for mates and looking after mates’ interests.

However, it is in the arena of National Security where Abbott’s real tough-guy persona comes to the fore.

The strong-man parallels with Putin are most apt when looking at how Abbott is dealing with the alleged terror threat we are supposedly facing.

Many people, not the least of which is Crikey‘s Bernard Keane, have pointed out that the death rate from terrorism is far lower than many other less sensational causes of adult mortality in Australia (and globally).

What kills more Australians than terrorism? Turns out most things do

But this fact hasn’t dented Tony’s enthusiasm for the lyrical two-word slogan. According to an analysis recently carried out by Fairfax Media, Abbott has mentioned “death cult” 346 times in media statements between September 2014 and May 2015.

For our prime minister, the “death cult” is a scary monster, straight from his childhood nightmares (were they peopled by priests?)

This is quite telling when you consider he has mentioned “domestic violence” (a much bigger killer of Australians than any death cult) only 43 times, which is 20 less than ebola (never a threat to Australia) and ten times less than “ice”, which is a local scourge in some places.

Tony’s narcissistic Government for himself and friends is plugging along. It is not popular in the electorate – at least according to reputable opinion polls – but he is recovering some ground against Labor.

The main reason for this is not good governance, or good policy, or even good luck.

It is the ruthless application of the “fear” card; the demonisation of refugees and Muslims and the banging of the “terrorism” drum.

The popularity of the "selfie" Prime Minister relies on a relentless cacophony of fear-mongering; inhumanity to refugees as policy; the criminalisation of a generation of Australian youth; the militarisation of civil society, via the creeping police state apparatus of surveillance; and the erosion of our privacy through data collection laws that are unnecessary.

The latest move – stripping citizenship from anyone vaguely suspicious, though not convicted of any crime – is just the latest in hubris from a man governed by his own base instincts and in thrall to his own ego.

Abbott is the student politician who never grew up, who never learned to get on with women and who believes his own twisted propaganda. He has gathered around him a cabal of like-minded buffoons.

Unfortunately, the vast majority of the mainstream media buys into this game; they thrive on Abbott’s antics and simplistic ideas and they turn their backs on history.

Abbott does not deserve the job he is manifestly unsuited for and the media that enables his self-serving behaviour is also unsuited to the needs of the Australian people.

Mr Abbott's government stumbles from one thought bubble to another, as its security beat-up becomes increasingly out of touch with reality.

You can read more by Martin Hirst on his blog Ethical Martini and follow him on Twitter@ethicalmartini.

The excruciating details of Tony Abbott trying to ambush his ministers have been revealed http://t.co/o1Pwv4tBvf pic.twitter.com/SQkb33VDey