Tony Abbott is, by the standards of most Australians, a very wealthy man ― so why does he claim taxpayers' money for doing volunteer charity work? PhonyTonyAbbott reports.

LIKE MOST POLITICIANS, Tony Abbott receives a pretty decent wage.

Tony Abbott also receives income from other sources, although it's not clear exactly how much he receives in additional income.

What is clear is that, according to the Parliamentarians Register of Pecuniary Interests, he also receives income from "casual journalism and media consulting" as well as royalties from his book Battlelines.

And as Tony Abbott reminded us all in his Budget Reply Speech, his wife Margie also works:

Margie runs a community-based occasional care centre which has to live within its means just like every small business and every family.

I don't know how much Margie earns, and quite frankly, it's not really any of my business.

However, it would be safe to make the assumption that the combined income in the Abbott household would be at least $400,000 per year ― and most likely more than that.

Like most politicians, Tony Abbott is also able to claim significant expenses that are paid for by the taxpayers of Australia.

What surprised me, however, is that Tony Abbott continues to claim expenses for his "charity" work, such as the Pollie Pedal.

For those of you who don't know, the Pollie Pedal is an annual cycling event that a number of politicians (State and Federal) take part in to raise funds for charities.

Tony Abbott was one of those responsible for starting Pollie Pedal which has gone on to raise around $2.5 million for charities.

That is certainly a commendable effort.

What isn't so commendable is the fact that Tony Abbott (and possibly other politicians) claim expenses from the taxpayers of Australia for this charity work.

That's a total of $8,237.00 in expenses ― and it doesn't include Tony Abbott's extremely high salary.

The expenses covering the 2013 Pollie Pedal are yet to be released, however, taxpayers will once again pick up those expenses as well, no doubt. 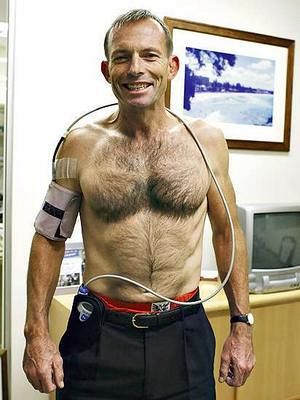 While Tony Abbott's charity work is commendable, given that the Pollie Pedal event is to raise funds for charity, one really needs to question why Tony Abbott claimed expenses for the charity ride ― his charity ride.

For someone who claims that Governments must live within their means, Tony Abbott apparently has no problem taking taxpayers money for doing what for most people would be unpaid volunteer charity work.

* Editor's note: Abbott’s monthly salary figure is simply the the yearly amount divided by 12, while the weekly is the yearly divided by 365 then multiplied by 7.

(This story was originally published on phonytonyabbott.com and has been republished with permission. For more on Abbott’s rather cavalier attitude towards his expenses, read Benjamin Jones' recent exposé: ‘If Slipper is guilty — then what about Abbott?’)