The controvsial top-secret Trans-Pacific Partnership is due to be signed very soon and is likely to have negative impacts upon many areas of ordinary Australian's lives without any financial gain whatsoever, writes Dr Matthew Mitchell.

The Trans-Pacific Partnership (TPP) is a global trade agreement being pushed by the United States onto nations around the Pacific.  What is so disturbing about the TPP compared with other trade agreements is that it covers so many areas. Its breadth means it will affect many aspects not only of Australian business, but also of everyday Australian life.

How will the TPP affect Australians? Well, for one, it has the potential to make people much more wary about using the internet. I say potential, because we do not really know what will be in the final agreement as it is all being discussed in secrecy, but thanks to some brave leakers we have some idea of what to expect — and what we have seen is very disturbing.

In relation to internet use, there is potential that laws regarding fair-use may be changed so that even downloading a web page could be considered a breach of copyright and a punishable offence. Now, it is not likely that corporations are going to go around and fine people for accessing their webpages — unless perhaps you are involved in public campaign against that corporation for some reason and then accessing and using information from that company’s web-page may be something they decide to prosecute you on. Sounds unbelievable doesn’t it? Yet, this is a possibility evident from the leaked text.

But the TPP is not limited to digital goods and copyright. It ranges across areas from agriculture to other areas of intellectual property, thereby impacting on many industries, including food (and food labelling) and pharmaceuticals. Thus, another risk is that the price of medicines may rise.

Nobel Prize winning economist Joseph Stiglitz argues that pharmaceutical companies will the use the TPP to block the release of cheaper generic drugs.

Stiglitz points out the undemocratic nature of the TPP negotiations , saying that:

“Powerful companies appear to have been given influence over the proceedings, even as full access is withheld from many government officials from the partnership countries.”

In Australia, the final decision will made by the executive — our prime minister (a walking timebomb recently declared 'shockingly incompetent' by a U.S. think-tank) and his cabinet. Once the executive sign the TPP, then some Australian laws will be passed through Parliament as required by the legislation. Once these laws are passed, then the TPP agreement is ratified and will come into effect.

You may well ask: “So, then the TPP will be debated in parliament?”

Not necessarily so. Only the required legislation will be debated, but there is the risk the TPP will be cleverly written so that some of the most controversial aspects do not require legislation, so will not be debated, yet will come into effect when the required laws are passed.

Civil society groups (47 of them) have written to  the chief TPP negotiator, Trade Minister Andrew Robb, stating that they do not think Australia should sign the TPP as it is not in Australia’s interests. Some of these groups speak on behalf of our most vulnerable and marginal people, who are likely to feel the effects of the TPP more than most — for example, through higher prices for medicines.

Now, you may legitimately ask: “But surely there will be benefits?”

The prospective member nations are Australia, the US, New Zealand, Canada, Mexico, Peru, Chile, Singapore, Brunei, Malaysia, Japan and Vietnam. According to a study by the U.S. Department of Agriculture, by 2025 the TPP will contribute 0% increase to Australia’s GDP. In fact, for most of the member nations, there is a zero, or marginal GDP growth predicted as a result of the TPP: 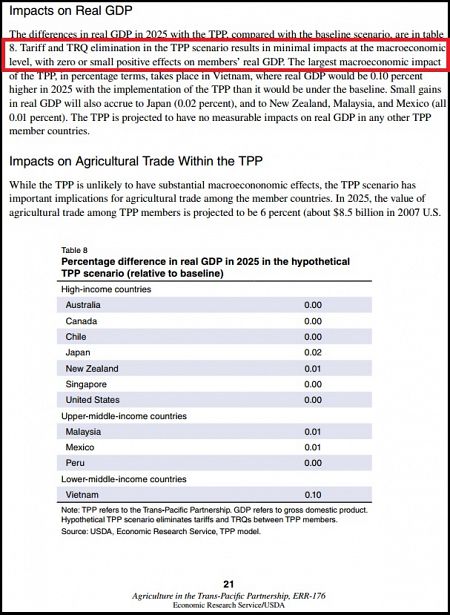 The highest GDP growth is predicted for Vietnam, which is expected to gain a 0.1 percent increase in GDP. So, according to this study, the TPP is all risk and dislocation, but without any foreseeable benefit.

In fact, Australia’s own Productivity Commission suggests that the benefits of trade modelling tend to be overstated in general. The Commission also recommends that openness and transparency are necessary elements of quality trade agreements — something that is distinctly lacking in the TPP process.

So, with no benefits to the nations involved and with no transparency in the process, you may well ask: “Why are we doing this?”

Dr Richard Denniss from the Australia Institute has pointed out the real agenda of these "free trade" agreements is about creating a list of exceptions to free trade. It makes sense, since free trade is a relatively straightforward concept — removing barriers to trade.

The dangers of an agreement that restricts local lawmaking ability are highlighted by George Monbiot with respect to the TTIP — a similar trade agreement to the TPP being negotiated for the Trans-Atlantic region:

“You think that getting your own government to regulate bankers is hard enough? Try appealing to a transnational agreement brokered by corporations and justified by the deemed consent of citizens who have been neither informed nor consulted.”

Monbiot says that problem with ISDS is [IA emphasis]:

“... the remarkable ability it would grant big business to sue the living daylights out of governments which try to defend their citizens. It would allow a secretive panel of corporate lawyers to overrule the will of parliament and destroy our legal protections. Yet the defenders of our sovereignty say nothing.”

Certainly, there are concerning precedents for ISDS where companies have sued governments for compensation over perceived losses when governments have changed their laws.

The most well-known case in Australia the one in which multinational tobacco company Phillip Morris sought compensation for bans on tobacco advertising under a trade-agreement. Phillip Morris pursued this case through an ISDS even though Australia’s High Court had ruled that it was not entitled to compensation.

Such challenges to the sovereignty of nations and their legal systems are issues that arise when ISDS clauses are included in trade agreements.

Important dates in relation to the TPP are as follows (courtesy of AFTINET):

Please contact your local MP to express your concern about this undemocratic trade deal, clearly designed to favour foreign multinationals for no benefit to ordinary Australians. Also, join GetUp!'s campaign against the TPP.