It has been a strange nine days since Abbott swept to power, says David Horton, who unpicks exactly what Tony and his old media pals have been doing and why.

HERE WE ARE nine days since the election that swept Tony Abbott and his Neanderthals to power ‒ although not quite in the Qld-style landslide they and Rupert Murdoch were hoping for ‒ and they have, astonishingly, not yet rolled into Government House to be sworn in.

For the media, including the ABC, the election seems not to have happened.

They ‒ rather like a Japanese soldier still hiding out in the Philippines and following the Emperor's orders 50 years after the end of the war ‒ are still bashing Labor, stirring up leadership tensions and ignoring policy issues, while Rudd supporters still trot into TV studios to talk about the future of the Party they damaged so badly Graham Richardson is still billed as a "Labor powerbroker" (the word "power" being wrong), and scum from the rightwing think tank the IPA, busily planning the Hayekian paradise, are merely identified as "conservative commentators" by the ABC — rather in the way they might identify Genghis Khan as a "Chinese Horseman".

So they continue to avoid any analysis of what an Abbott election will mean for Australia and Australians (while also loudly protesting their innocence in his election success "Wasn't me Gov") and we must search carefully for clues, rather in the way that a soothsayer would check the liver of a sacrificed goat or chicken for cancerous spots.

There were cancerous spots even before the election, of course, if you were paying attention. The release, finally, of dodgy costings by a panel of old Liberal mates, of a few of their policies, carefully timed for after the media blackout on election advertising. Then, even more cynically,  (which didn't seem possible) the announcement, at 10pm the night before the election, carefully timed so that the next morning's newspapers were already printed, of previously unmentioned policies of slashing funding to childcare and aged care and the removal of standards for teachers and nurses in those institutions. Hard to imagine too many families without an interest in either or both areas, and hard to imagine their voting intentions would have been unaffected by the announcement had they been aware of it.

It was very quiet immediately after the election, except for two things.

Firstly, the removal of Steve Bracks, who had recently taken up a diplomatic posting in New York — an act of vicious nastiness, ignoring the efforts of the previous Labor government to appoint a number of Liberal politicians (such as Nelson, Vanstone and Downer) to diplomatic jobs in a bipartisan spirit. It is a sign that anyone these people see as being "them" and not "us" ‒ not for us then against us ‒ will be shafted in the coming years.

Then came the instant stopping of funding for clean energy by the Corporation established for that purpose. If the Bracks thing was a signal that people would be shafted, the unseemly rush to block the CEFC was a sign the environment will be shafted. Campbell Newman in Queensland confirmed this with his welcoming of Abbott's election as the removal of "shackles" holding back his hell-bent course of habitat destruction in that state.

Finally, in the couple of days came two announcements that are also omens for what is coming.

First was from Julie Bishop, the incoming foreign minister, whose first action had been the Bracks' assassination. Her second action was to announce no more first class travel and accommodation for public servants travelling overseas on business. Of course, it was all complete nonsense — I understand it is decades since first class flights were allowed. Her first trip, to America, naturally, she proudly said would be business class — but, as others have pointed out, the airline would automatically upgrade her anyway. Nor was there any mention of the travel and accommodation perks of former Liberal PM John Howard, who has racked up huge sums in first class flights and luxury suites.

Still, the media loved it, which was of course the point.

As was the announcement yesterday that while renovations to the official PM residence "The Lodge" proceeded, Tony Abbott would "live" in the hostel-style accommodation used by Federal Police recruits while they do their training course. As with the Bishop announcement, you needed to understand that he still had available to him the luxurious Kirribilli House in Sydney where, presumably ‒ just like his hero John Howard who, uniquely among all Australian Prime Ministers, refused to live in The Lodge, such was his hatred of "Canberra" (that is: "government") ‒ he will live when parliament is not sitting.

But the point was that he wouldn't be using hotel accommodation in Canberra, instead he would be occupying, as his friend rightwing shock jock Andrew Bolt instantly said:

There we have it, you see. The Libs' backroom team ‒ Credlin, Loughnane and others ‒ have not missed a trick in the last three years of myth-making, image-building, smoothing and massaging and polishing that terribly unattractive creature that was Tony Abbott. The budgie smugglers, and hard hats, and fluoro vests, and "surf life saving" and "bushfire fighting" and drinks with the boys, and all of that manufactured deceptive appearance ‒ the fakery of the fire-fighting and the expenses claims for all his "charitable" work, never mentioned ‒ is set to continue.

They play the long game, these people, unlike the short-term approach of Labor and Green. Getting Abbott elected is one thing, but it is not the end, not the beginning of the end, merely the end of the beginning. They are already thinking of getting him re-elected in 2016 and 2019, and I bet Ms Credlin already has a folder labelled "Strategy for Election 2022".

The image, of both Abbott himself and the Party, needs to be constantly polished. The people whose job it is to get conservative political parties elected to serve the interests of big business know they have a tough ask. The public instinctively ‒ and correctly ‒ usually dislikes conservatives as people and ‒ if they were allowed to understand them ‒ conservative policies.

The aim of Julie Bishop moving (though only metaphorically, not in reality) from the front of the plane, in luxury seats and four poster beds drinking champagne with the rich people, to the back of the plane, knees tucked under chin, sharing cheese sandwiches with the hoi polloi, is to make her one of the girls, unlike Julia Gillard. Putting Tony Abbott (again, mostly metaphorically) in a "spartan" cell with ordinary young coppers, is to continue turning him into one of the boys, unlike Kevin Rudd. This is Good Tony (like "Honest John" before him) as Honest Abe or Saintly Ben (Chifley, of course, who famously stayed at a cheap hotel).

There is no doubt that when these new ministers emerge blinking from the smoke-filled rooms, where they have been receiving their riding instructions from rightwing think tanks, they will embark on a program of slashing and burning public services ‒ and the economy ‒ the like of which this country has never seen. And will do so not for any valid economic reason (just the reverse) but because they are driven by ideology to privatise and deregulate until the government disappears down the plug hole of the neo-con bathtub.

This is going to cause enormous financial pain ‒ and, down the track, the pain caused by environmental destruction ‒ to the kind of people convinced to vote conservative by fear campaigns (Yellow Peril! Communists! Terrorists! Refugee Boats!) and misrepresentations of the economy (Debt crisis! Carbon Tax!). The other important message crafted for the Libs, then, is that they share the pain — it is hurting them (Hostel! Economy Class!) more than it hurts you. They hate to do it ‒ hate to hurt their faithful battlers ‒ but it is for their own good.

Now, this is a hard trick to pull off ‒ given that Abbott & Co. swan around with the likes of filthy rich Murdoch and Rinehart ‒ but with the aid of compliant journalists, Tony's sainthood can easily be sold. They don't even need a miracle.

So get ready for a lot more of this.

Remember, these people are playing for very big stakes indeed and they have learnt to leave nothing to chance. They are determined there will never be another Labor government in  Australia, now that Tony is safely home — and they know just how to ensure that.

This story was originally published on David Horton's The Watermelon Blog. You can also follow David on Twitter @watermelon_man. Read also managing editor David Donovan's recent article: What Abbott has in store for Australia. 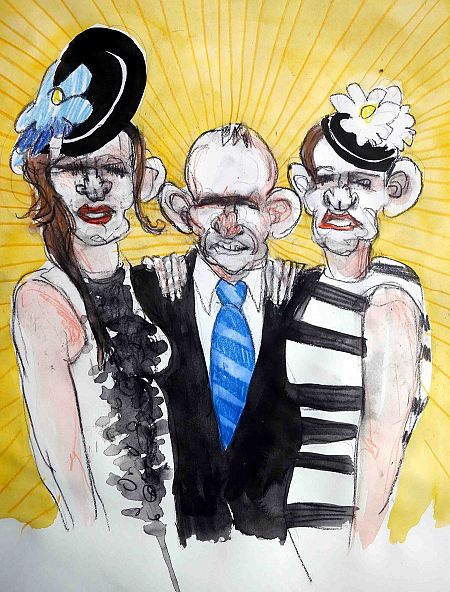