Australia is the only country founded with a deliberately imposed class system, says David Horton, and the Liberal Party's budget shows the battle is still on in earnest for equality.

WHAT ELSE can possibly be said about the worst Australian Budget in history that wasn't said by Abbott's smirk as Hockey screwed the students; his comment that they were going to undo everything the Australian Labor Party had ever done in government; and Hockey's comment that they were going to get government out of people's lives (given that the government is, or should be, the people, this translates as 'getting people out of their own lives')?

Australia is the only country founded with a deliberately imposed class system.

There were also, of course, the original owners of the chunks of land, but they were seen as lower than the convicts, totally outside any white class system — ordinis nullius.

A perfect system, a Utopia, as seen by the British upper classes occupying Whitehall, or those eager to send their good-for-nothing younger sons out to the colony to make a fortune  — a land grant being a license to print money, based as it was on dispossessing original owners without payment, and then running an enterprise based on slave labour and sure sales to a captive market or the Mother Country.

This all began to break down when, totally unexpectedly, those pesky slaves − sorry, convicts − began to breed like, well, not rabbits, they hadn't yet arrived in the paradise, human beings — who'da thought?

Convict women married, or lived with, convict men or the ordinary soldiers (also outside the original class system, being on duty), and then began to have babies who were...

Well, what were they?

Not convicts, but freeborn .... um, citizens. And further, soldiers finishing their tour of duty, and convicts finishing their sentences, were choosing (not that they really had a choice) to stay in the country. Also now free citizens.

Except there was no such animal dreamt of in Whitehall philosophy. Australia is a prison, not a country, old man, no room for citizens in a prison.

But the non-citizens, m'lud, begged to differ.

The Currency Lads and Lasses, as the free born (who, unlike freed convicts and demobbed soldiers, were indisputably without original sin) were called, led by William Charles Wentworth, arguably the first Australian socialist in a sea of Australian tories (and I would have loved to have said that to his distant descendant and namesake, High Tory Menzies minister Billy Wentworth, whom I knew slightly.

They kept hammering away, climbing a big hill, and little by little a place was found for them in society in between the upper and lower classes.

A middle class was born in the Great Southern Land and, with it, Australia became – not a prison – but an actual country that happened to have some convicts.

In the last 200 years (say, since old WC climbed those other mountains that were holding back the development of white Australian society) Australian history (as Manning Clark, using his new currency of history told from below instead of by the class war winners, might have said, and basically did) is simply the continuation of that original battle between battlers and toffs, other ranks and officers, prisoners and prison guards.

A battle for equality of rights and economic benefits.

Up until Tuesday, 13 May 2014, that battle had ebbed and flowed but with a slow – oh so slow – sense that the currency lasses and lads, the new breed, were gradually prevailing over the Tory dinosaurs and their descendants.

Slowly, but surely, disparities of wealth (and its accompanying access to, for example, the best of education, health care, housing, culture) were pegged back. The light on the hill, that vision of Australia as a kind of Antipodean Scandinavia – not a Down Under Home Counties, or a Western Pacific 51st State of the USA – took hold and we all climbed towards it.

An occasional flicker while the Lord Warden of the Cinque Ports was also Warden of the Six States; or a Queen's representative sacked a Government elected by Currency Lads and Lasses of 1972 and 1973; or while a descendant (I guess) of the England-ruling Howards ran the place in between Ashes and Royal Tours, but by and large the trajectory was ever upwards.

In the half an hour or so it took cigar chomping dancer Joe Hockey to read his dystopian document on Tuesday, Australia was transported back to 1814, back to that old currency of rulers and slaves.

We need another Billy Wentworth to start the battle with the Australian Tories on the behalf of all us Currency Lads and Lasses all over again. Sadly we only have Billy Shorten.

You can read more by David Horton on his The Watermelon Blog or follow him on Twitter @watermelon_man. 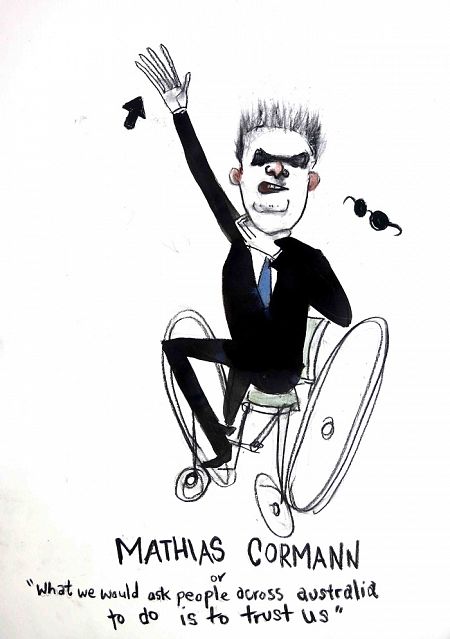