Joe Hockey thinks wind turbines are a "blight on the landscape"; David Horton suggests he may like them better if they were covered in oil and coal dust.

These kind of wtf moments seem to come every day from this worst-government-in-Australian-history Government.

"I drive to Canberra to go to Parliament ... and I must say I find those wind turbines around Lake George to be utterly offensive,” Mr Hockey told Alan Jones on 2GB. “I think they’re a blight on the landscape.”

All jolly good fun along the lines of the "you gotta laugh or you'll cry" school of political commentary. But for gorsake stop laughing, this is serious.

I have written about wind farms before and here and here, trying to explain the inexplicable resistance to these valuable and aesthetically pleasing harvesters of renewable energy. And now, in a single sentence of numbing stupidity, the Treasurer of the Commonwealth of Australia sums up the problem at three levels.

At the simplest level, Joe is engaging in the mindless shockjockery language that has become the lingua franca of the know-nothing Right of Australian politics. The Knights and Dames of radio and print have quickly followed the American Republican technique of demonising and delegitimising even mildly left of Centre-Right politicians and policies by screaming abuse at them.

Not so much a case of mud sticks, but shit sticks better.

So here is Joe, showing Alan he is one of the boys by describing wind farms in the kind of way that the likes of Mr Jones have been doing for years. No subtlety, no science, no analysis, wind farms are utterly offensively blighting the landscape. Joe knows he will get favourable treatment from Alan anyway, but a little more male bonding is never too much.

The second level is the one where we cherche l'argent.

The recent ICAC hearings in NSW have shown that, just as in America – and indeed everywhere in the world – the money to be made from exploiting fossil fuels spills over into politics and utterly corrupts the development and application of environmental and economic policies.

When Joe sees a coal mine, a gas field, an oil rig (or a uranium mine) he sees, perhaps subconsciously, political donations to his political party, donations that are indispensable in gaining or regaining power.

How many breakfasts,dinners,bottles of Grange & donations did it take to get Joe Hockey to sledge wind farms? #auspol pic.twitter.com/Cz8KCi9USs

I'm guessing when he sees a wind farm he sees no political profits for anyone — but certainly not for his side of politics. Not enough profit in renewable energy for an overflow to swirl into the coffers of Menzies House.

And finally we come to the point where we must call a spade a spade. All of those internet demands that Joe should smell the roses, lift his eyes from his boots to the horizon, recognise that a windfarm is far more attractive than the blots on the landscape caused by fossil fuel extraction, were totally misplaced. Mr Hockey, I am sure, would be completely baffled by that concept.

To him and people like him (see here where I talk about people like him in relation to uranium) coal mines, gas fields, are places of beauty, in the way they were in Victorian times in Old Blighty — where there's muck there's brass. The Earth is there to exploit with extreme prejudice, and a dirty big hole in the ground is a beautiful sign that someone is doing just that.

A wind farm (like a solar farm) on the other hand is a kind of wimpish passive absorption of energy directly or indirectly from the Sun. No spoil heaps, no polluted rivers, no cancerous fumes, no spades or big shovels, no trains or trucks, no dirt under fingernails, no sweaty brows, no need for a beer to quench thirst, and no billionaire Giant striding across the dominated land.

Beauty is in the eye of the beholder — and conservative beholders will never see a wind farm lovely as a coal mine. Where you and I see ruin of the natural environment, Joe and friends see profit from the exploitation of land meant to be exploited.

Perhaps the pristine white towers and sails were a big mistake, would it please Joe more if the wind turbines were covered in oil and coal dust?

Would they be less offensive, less blighty?

@JoeHockey Thank you for standing up to #windfarms. They are really very offensive. #auspol pic.twitter.com/hc426wISjx

This piece was originally published on David Horton's The Watermelon Blog. You can follow David on Twitter @watermelon_man.) 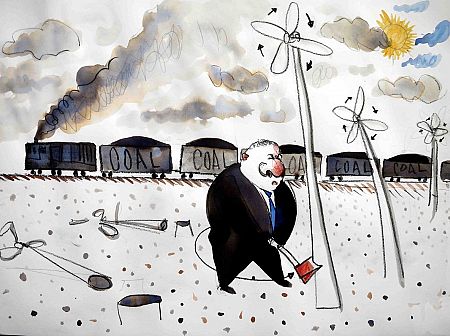