The release of the Lewis Review into the ABC yesterday putting the finishing touches to Abbott Government's plans to gut the ABC. David Horton explains how this lamentable state of affairs has come about.

Baldrick: I have a cunning plan to save the king.
Edmund Blackadder: Ha! Well forgive me if a don’t do a cartwheel of joy; your family’s history in the department of cunning planning is about as impressive as Stumpy O’Leg McNolegs’ personal best in the Market Harborough marathon.

SINCE JOHN HOWARD began stacking the board of what he was determined would become His ABC, there is absolutely no doubt that the political philosophy of, and reporting by, that once great neutral public broadcaster has, like its role model the BBC, swung sharply to the very right of the conservative end of the Australian political spectrum and beyond into the wastelands of right wing think tankism, libertarianism and tea partyism.

No doubt about the techniques used to achieve this, nor about the result, but – just as in the choice between conspiracy and stuff up to explain a disaster – some doubt about the logic behind it.

Well, doubt in my mind, anyway, as an avid consumer of ABC news and current affairs for 60 years who has refused to watch any in the last five years or so. A doubt brought into even sharper focus by the recent Federal Budget brought down by the “Enemies of the ABC” Government, which has slashed huge sums from the ABC budget and is now to force them to outsource all production and start charging for content. The end, as demanded by the Liberal Party scriptwriter, the IPA, is nigh for Australia’s public broadcaster.

Well we can look at it two ways. The change to the ABC could be the result of fundamentalist political beliefs, or a cunning plan gone wrong in catastrophic Baldrickian fashion.

The first theory would point out that, as Keating might say, if you change the Board and senior management of an organisation you change the organisation in a trickle-down effect. Boards appoint politically simpatico senior managers who, in turn, appoint like-minded middle managers who, in turn, appoint right-minded producers, editors, reporters, presenters. By the time the last appointment is made, you have a public broadcaster made in the unalluring form of the mind of John Howard.

The second, Baldrickian theory is this. Faced, once the Rudd-Gillard political totentanz began, with the inevitability, apparently sooner rather than later, of an Abbott Murdoch-puppet-government working through an IPA wish list featuring prominently the privatisation of the ABC, and the dismantling (or sale to Murdoch) of the Australia Network, senior management seized on a survival plan.

To begin with, all news bulletins would lead with:

No government policies or plans would be treated positively.

News items would be extensively derived from News Ltd papers, or radio shock jocks, each day.

Presenters and political reporters would be either known for their anti-Labor proclivities, or be under instruction that all reporting/interviewing was to be on the basis of: Liberal Good / Labor Bad.

And, of course, no scurrilous rumour undermining the government should be left unreported, while no examination of Liberal policies was to occur.

Satirical programs ridiculing Gillard and Rudd were to be encouraged, while Abbott was to be given a golden Menzies aura.

Overall, ABC's credibility, build up over decades as a serious independent neutral public broadcaster, was used to transfer credibility to News Ltd, the IPA and the Liberal Party.

Thus, the prospect of the imminent arrival of an Abbott government was turned into a self-fulfilling prophecy by the ABC on September 7, 2013.

But if the ABC had been turned into a Libertarian wet dream by a trickle of neoconservative ideology, or if this was the cunning plan for the survival of the ABC as a public broadcaster — what went wrong in May and June 2014? After months of attacks on the mythical “left wing bias” of the ABC by ministers (including the prime minister) and News Ltd continued in the lead-up to the Budget in which the worst fears of the few remaining Friends of the ABC were realised.

Well, there was just one tiny flaw in the cunning plan (if cunning plan it was) — hardly worth mentioning really. You see, it relied on Government MPs sharing a belief with the rest of the country that the ABC was a very important national institution, a fundamental part of Australia and that pouring right wing ideology into it would be enough to encourage the Liberal Party to keep it intact. That if they heard a chorus of right wing voices singing from the Menzies House song book on ABC every day they would see it as useful in their plans for a thousand-year rule.

Trouble is, they didn’t and don’t.

With Murdoch and the shock jocks on side, they saw no need for an ABC; that given, as it were, a choice between a real News Limited and a public broadcaster who acts like a Murdoch mouth piece, a Liberal will vote for his real Masters Voice every time.

So, whether a plan or not, moving to the Right won the ABC no reprieve from the Liberal Government, while at the same time it lost it all the support of those of the centre and left who were once friends of the Corporation and once would have massively demonstrated in its support.

Blackadder: Baldrick, have you no idea what “irony” is?
Baldrick: Yes, it’s like “goldy” and “bronzy” only it’s made out of iron.

You can read more by David Horton on his The Watermelon Blog or follow him on Twitter @watermelon_man. 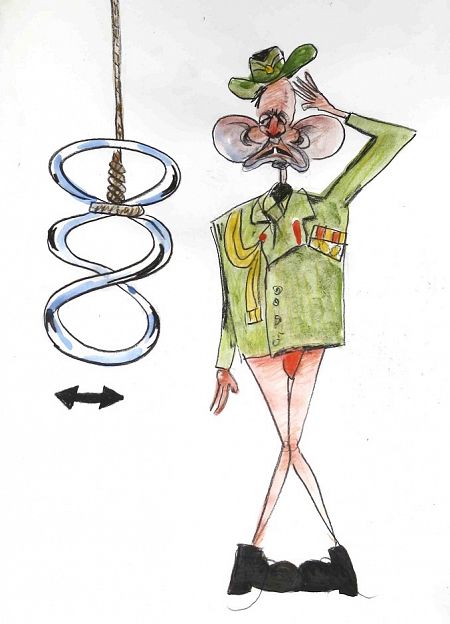