Tony Abott is calling the planned natural disaster levy just another "great big new tax". Does he have a heart of stone? Barry Everingham comments. 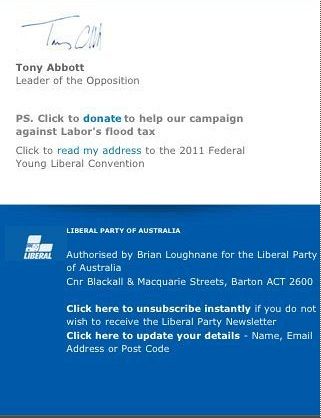 When natural disasters create death, disaster and havoc in our country, it takes a particular type of Australian to be so unmoved that he uses the situation for political advantage.

Such is the modus operandi of the Federal Opposition Leader, Tony Abbott. A man who has reached such unfathomable depths, even for him, that he politicizes the Prime Minister’s planned levy to help the tragic victims of our recent appalling natural disasters. The latest is that he is calling for Liberal Party supporters to donate to help the "campaign against Labor's flood tax".

Abbott, of course, is the current face of John Howard’s "New" Liberal Party, which isn't liberal in any sense. It’s impossible not to imagine the reaction of true Liberals such as Menzies, Holt and Hamer or, closer to home, Brendan Nelson, Billy Snedden, Don Chipp and Malcolm Turnbull to the latest Abbott outrage. Malcolm Fraser has come out fighting on behalf of the party he abandoned because of the likes of Howard and Abbott.

Howard, it may be remembered, turned a blind eye and a deaf ear to Pauline Hanson’s particular brand of obnoxious xenophobic Australianism and then followed it through by marginalizing the Muslim community of this country and slavishly condoning the war-mongering policies of the United States most incompetent and despised president, George W Bush.

Abbott showed his true colors by filling his front bench with extreme right wingers – such as the dreadful, shrewish, Sophie Mirabella; the pugnaciously belligerent Cory Bernardi; and the imbecilically incompetent Kevin Andrews – though there are many others that any serious Opposition Leader would instantly jettison. 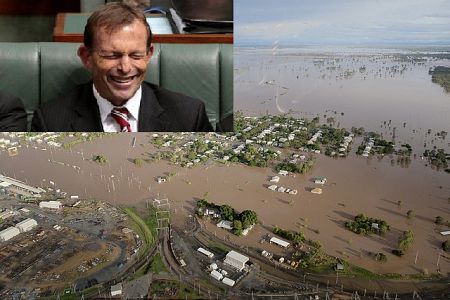 For Abbott to brand a levy aimed at helping victims of a natural disaster as just another "great big tax" shows how totally unsuitable he is for higher office—he simply cannot be taken seriously.

And the dogs are barking already—the midnight oil is burning in the office of Malcolm Turnbull.