Tim Wilson and the Institute of Public Smokescreens

With IPA director Tim Wilson being appointed as a human rights commissioner by the Abbott Government, it is timely to revisit deputy editor Sandi Keane’s 2011 exposé on Wilson and the shadowy organisation he worked for until just a few days ago.

THERE’S NOTHING MUCH that’s public about the Institute of Public Affairs (IPA).

Not its affairs … and certainly not its financial affairs.

Apart from a few lapses of discipline over the years or an unavoidable moment of truth telling in response to some teeth pulling by the Productivity Commission, the IPA is shy about revealing its funding sources.

In his 2007 scathing critique of the PR industry, Inside Spin: The Dark Underbelly of the PR Industry, Bob Burton wrote about how conservative think tanks like the IPA are used as a smokescreen by those large corporations anxious to hide their affiliation to invisibly influence just about every news story we see and hear:

‘...a little funding routed via a think tank enables the policy agenda of corporate funders to be projected to a broader audience with more credibility than if they did it themselves.’

A big fan of Media Watch, I was, therefore, fascinated when Jonathan Holmes – clearly a fellow-spin-fatigue sufferer – decided to tell the IPA that the game was up.

We were about to be avenged.

Just days after the then Rudd government’s announcement of its “plain packaging” plans on 28 April 2010, Media Watch went to air on 10 May with a damning critique of the IPA entitled “Smoking out the Spin”.

The program focused on the reaction by the IPA’s Tim Wilson the day following the Government’s media release. Wilson stormed the airwaves on behalf of Big Tobacco, virtually wall to wall. He clocked up thirteen radio interviews, an opinion piece in The Australian and still managed to pop up, fresh as a daisy, on prime time 7.30 Report. Be afraid, he warned. Be very afraid. This outrageous plan would cost the public $3 billion in compensation! If our government took away a company’s logo, it could be seen as stealing! 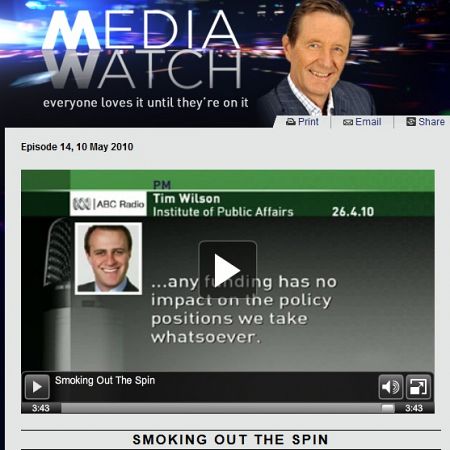 Jonathan Holmes clearly took exception to the ‘cash for comment’ record of the IPA, particularly when the ABC is used as the vehicle. If the IPA was acting on behalf of the tobacco industry in return for large injections of cash, this should be disclosed.

The program asked the IPA whether it still received funding from tobacco companies.

It declined to comment; it was up to their sponsors to divulge who was on the payroll, it said.

Which leads me to the question: just what is the word “public” supposed to signify in this organisation’s name — a weasel word to obscure its shadowy dealings?

Media Watch could have gone a step further and asked IPA Director, Alan Moran. He’d have confirmed that the IPA receives cash for comment from those corporate interests anxious to hide behind a seemingly acceptable outfit like the IPA.

Thanks to Dr Guy Pearse’s forensic exposé of the IPA in High and Dry, we are directed to a Transcript of Proceedings of the Inquiry into the National Access Regime on 28 May 2001. The participants, IPA, United Energy, Citipower and TXU, are asked by the Chairman to give their names and affiliations. Alan Moran revealed that the IPA had about 4,000 funders and whilst the IPA [IA emphasis]:

“… may take positions which are somewhat different from those of the funders. Obviously that doesn’t happen too often, otherwise they’d stop funding us…” (p.45)

Watching the program, I was impressed by Tim Wilson’s manic output that day. It was a marathon effort.

No wonder young Tim Wilson is hailed as the IPA’s wunderkind. Alan Moran surely couldn’t have gone 13 rounds on air plus the 7.30 Report (and we’re talking Kerry O’Brien here) as well as pen an opinion piece for The Australian. I know I couldn’t have.

Grudgingly, I had to hand it to Tim — whatever Big Tobacco was paying him, it wasn’t enough.

It makes financial sense to give generously to high profilers like Tim Wilson and the IPA. Why risk being mauled by the mob when you can hire a pressure group like the Institute of Public Affairs? Its media savvy guarantees a positive sound bite, millions of dollars of free publicity through opinion pieces in our major newspapers and ‘credible commentator’ status on all major current affairs TV and radio programs. How many times does the IPA pop up on The Drum, Q&A, 7.30, Lateline, ABC Radio National, regional ABC radio? I don’t watch commercial TV, but here’s wall to wall media exposure across the ABC for starters.

What struck me was how a shadowy outfit like the IPA with some of its unsavoury connections gets that amount of free publicity on the ABC? Greens leader Bob Brown struggled to get a mention for the Green’s views on plain packaging the day Tim Wilson dominated the airwaves.

It appears the politicization of the ABC under the Howard government (documented by Margaret Simons, Robert Manne, and Clive Hamilton, amongst others) has survived the Howard regime. If you recall, the Minister responsible for the ABC ordered ‘surveillance’ to prove bias. Right-wing appointments were made to the Board. They, in turn, appointed senior executives to carry out the transformation. It was called the ‘culture wars’.

The culture exists today in the ABC’s mindless pursuit of ‘balance’. The BBC is far more balanced in that it represents ‘the majority view’. It also has a stricter policy on disclosing links to sponsors.

Thus, I was compelled recently to write to Jon Faine, the popular presenter of the ABC’s 774 Melbourne Morning program. Jon Faine is a respected journalist and no fool. Yet, every Friday on his ABC 774 morning program in Melbourne, the IPA’s Tim Wilson appears as Faine’s guest on the Friday Wrap segment. Prior to Tim, it was IPA’s Executive Director, John Roskam.

The IPA is the heart of climate science denial in Australia and some say the denial movement started with the IPA, following its funding by the mining lobby.

But not once does Jon Faine ask the question that Media Watch berated journalists for failing to do inSmoking out the Spin: does the IPA get funding from the big polluters?

I know it does and the fact is well documented. But not all ABC listeners know this.

My complaint was that the IPA’s funding sources should be disclosed when its agenda is clearly one aimed at delaying any sort of regulation on the big polluters. The response from Jon Faine was:

“The IPA position is what it is and they are as entitled to be heard as anyone else, regardless of their $ source”

So, two different opinions from the ABC.

Jonathan Holmes believes that when Tim Wilson is on the ABC airwaves spruiking for Big Tobacco, the funding links should be disclosed.

But when the same Tim Wilson spruiks for Big Carbon on Jon Faine’s program, it is OK.

Could be tricky for a busy boy like Tim; he’ll have to focus:

The IPA does a sterling job spinning for Big Carbon and Big Tobacco. But given the challenge of winning over the spin-fatigued public, it decided it needed to multiply its efforts. More lobby groups were the answer.

There are no treehuggers here in the AEF, just treeloggers. This ‘astroturfer’ with the greenwashed name promotes logging of old growth forests, genetic engineering and nuclear power and is, as you would expect the loins of the IPA, a climate skeptic front group. Timber Communities Australia is one of its funders.

The IPA has been spinning the facts on climate change for several decades now. Its moral lowpoint was inviting (Crackers #3) Dr Fred Singer to Australia not once, but twice. This is the man who used his scientific credentials to argue against the link between lung cancer and cigarettes; stopped prompt action on CFCs, played down the danger of nuclear weapons, denied acid rain was caused by pollution and even took sides against the whales.

If there was harm being done to man, beast or planet and your corporation was the cause, Singer was your “one stop shop”. 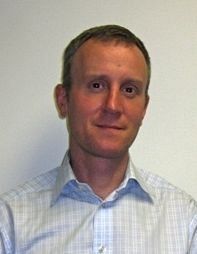 The IPA's links to the Liberal party are longstanding and profound. For instance, its Executive Director, John Roskam (pictured above) is a Liberal party powerbroker and former Howard Government staffer, who has run for election for the Liberals on several occasions.

Through its association with the IPA, Fred Singer and the whole cabal of climate skeptics, the Liberal party lost supporters in its ranks who care passionately about the future of the planet.

A sobering observation was made this month by Health Minister, Nicola Roxon: if someone came up with the idea of cigarettes today, their product would be banned. The tobacco industries’ product kills half of those who use it. In January this year, a US district court overturned the appeal by Phillip Morris on charges that it had violated the Racketeer Influenced and Corrupt Organizations Act for conspiring to hide the dangers of cigarettes.

Who would want to associate themselves with corrupt racketeers and purveyors of a disease like cancer? Well, the Institute of Public Affairs and the Coalition do. Abbott might have kicked the habit of saying ‘no’ when he supported plain packaging, but accepting blood money from Big Tobacco is a reflection on the moral bankruptcy of this once proud party.

I can still remember when the IPA was more transparent — when it used to list BHP as one of its sponsors. These days, you’d need a laser to shed light on the murky depths of the IPA’s money pool.

Rio Tinto was a sponsor. We know that because it announced it was withdrawing its sponsorship of the IPA following the aggressive character of IPA's attacks on Aboriginal self-determination.

Thanks to research done by Australia’s climate organisations and Sourcewatch, we can shine a light on some of the corporations using the services of the IPA. These include Philip Morris, British American Tobacco, BHP Billiton, Western Mining, Caltex, Esso Australia (a subsidiary of Exxon), Shell, Woodside Petroleum, Murray Irrigation Ltd. Telstra, Clough engineering, Visy, News Ltd. and fifteen major companies in the electricity industry.

It’s a start. But it’s high time the media starting insisting on disclosure. That way, we’d know when we’re being spun a line. And we might start getting some real ‘balance’ and an informed debate.

In Margo Kingston's 2004 book, 'Not Happy, John', the IPA's then executive director Mike Hahan was quoted as saying that the IPA's supporter list would be publicly available in the near future.

Tim 'It's not my choice women have babies, it's genetic' Wilson: