ALONE in the developed world, Australia navigated the last major global financial crisis without going into recession, without mass job losses and without a spike in suicides. Those days are gone. That competent Government is gone. Instead, Australia is now among the global losers.

Last Wednesday’s (3 June) quarterly report on the national accounts by the Australian Bureau of Statistics (ABS) shows Australia’s economy contracted by 0.31 per cent in the three months to 31 March. We do not have figures for the June quarter about to end, but we know that will be another negative quarter. A recession is defined as two or more quarters of negative growth in gross domestic product (GDP) — the measure of all the production the entire economy manages to generate.

Australia’s three decades without a recession has now come to an end. This is about real people, their jobs & their capacity to provide for their loved ones. We need the Govt to do a better job managing the economy & responding to this crisis than they have so far. #auspol pic.twitter.com/ZEhpyL54e8

Thus ends an extraordinary run of growth which began when Paul Keating dragged the economy out of the 1991 global recession, referring to Australia’s experience as “the recession we had to have”. Keating’s restructure fireproofed the economy forever, or so it seemed. Australia weathered the early 2000s worldwide recession, the 2008 Global Financial Crisis (GFC) and minor blips along the way such as the 2015 Chinese stock market crash.

Deterioration in the March quarter was recorded in consumption, business investment, inventories and services exports. Household spending on consumer items fell by 1.1 per cent, the worst decline since 1986 when Bob Hawke was in charge. Of the 17 spending categories, spending declined in ten of them.

It was not inevitable that Australia’s economy would contract in 2020, despite the impact of the pandemic. Yes, it whacked tourism and severely impacted foreign student arrivals, the restaurant industry and other sectors.

But, as with the bushfires in the previous quarter, the pandemic also generated considerable new economic activity. Expanding hospital beds, medical treatment, importing respirators, buying and using virus test equipment, hotel accommodation for quarantined returnees, sales of computers and software for homeschooling are a few examples. All these required staff, who were paid salaries on which taxes were paid. People still consume the same quantity of food, and possibly more beer and wine, if they are driving less. Not to mention that extraordinary rush on toilet paper.

The second indicator that the negative quarter was avoidable is that exports have been and still are booming. The March accounts show mining investment rose by a healthy 3.6 per cent in the quarter. Had the Coalition Government ensured more proceeds are retained in Australian rather than sent straight offshore, things would be healthier.

The third indicator that the recession was avoidable is that several countries which copped the virus more heavily than Australia recorded growth in March. Bulgaria has lost five times more citizens than Australia has, relative to population, but recorded plus 0.3 growth. Ireland, Turkey, Chile and Romania have all had COVID-19 death rates more than 12 times Australia’s creditable four deaths. All their economies grew last quarter.

We still await March figures from another dozen or so developed countries, so there may be others. We will discover Australia’s ranking in due course.

We already know where Australia ranked on GDP growth through the last international crisis. Top of the developed world in 2009! And close to the top in the surrounding years.

Last week’s national accounts confirm Australia is in a serious productivity hiatus. The index number for March just struggled back up to 100.7 — a level achieved after much puffing and panting eight quarters ago. So there has been no improvement in the capacity of the economy to generate wealth and income in two years. That has rarely happened before in Australia’s history.

Through the six Labor years, which included the GFC, productivity increased from 87.8 index points to 96.5. That’s an average rise of 1.45 points each year. We are now down to zero. See chart, below. 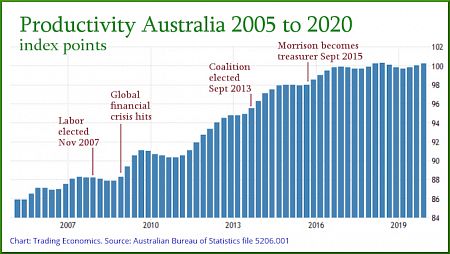 We told you so

In the run-up to the 2013 Election, some observers outside the mainstream media expressed concern that a Coalition government with Tony Abbott as Prime Minister and Joe Hockey as Treasurer would not manage the economy successfully. This anxiety contrasted starkly with the exuberance of the Murdoch press which ran full-page front covers declaring 'Australia needs Tony' and 'Tony’s Time'.

Specifically, this column summarised the prevailing concerns regarding Coalition economic incompetence under seven points, six of which were soon proven valid. (You can read them all here.) In fact, within two years both Abbott and Hockey were ejected from their jobs – by their own party!

The one concern articulated in that article which was not validated in the early years has now come to pass — that the Coalition’s policies, in contrast to Labor’s, would not protect Australia from a global recession. That analysis was based on the conflicting policies announced in 2009 by the Rudd-led Government and by the Abbott-led Opposition. Rudd implemented the world’s fastest and boldest stimulus intervention, while all other administrations acted more moderately. Abbott advocated a less aggressive response, lauding New Zealand’s strategy which cut taxes instead of handing out cash to households and investing heavily in infrastructure.

The world then watched New Zealand go through eight quarters of negative GDP growth, while Australia skated through the crisis with just the one.

It is highly unlikely a Labor Government would have delivered negative growth in March. History suggests it would have ensured low-income earners and welfare recipients had more to spend than is now the case. That would have increased both household consumption and private capital formation. It is virtually assured, also based on experience, as recalled here last week, that Labor would have invested more in infrastructure.

Had activity over the quarter been boosted by just another $1.5 billion, growth would have been positive. Alas, this was not to be.

Alan Austin killing it as usualhttps://t.co/owikWYrttH