We really must talk about Tony Abbott and Joe Hockey

Australia's economy will be put at serious risk if it is handed over to the confused, contradictory and ideologically divided Coalition this weekend, writes Alan Austin.

THERE ARE SERIOUS RISKS to the economy should the Government change this weekend. Profound disquiet is being felt in many quarters ― although no-one relying for news on Australia’s mainstream media would notice.

There are seven compelling reasons why handing the economy over to Tony Abbott and Joe Hockey will almost certainly see a dramatic deterioration in Australia’s fortunes.

1. The first is the danger that Australia will suffer a serious recession if the current global crisis continues and appropriate responses are not continued.

According to the OECD, further severe deterioration is likely.

Australia fared better than any other developed nation through the 2008-09 global downturn. As the result of the strongest and fastest stimulus program in the world, jobs, incomes and GDP growth were all maintained. 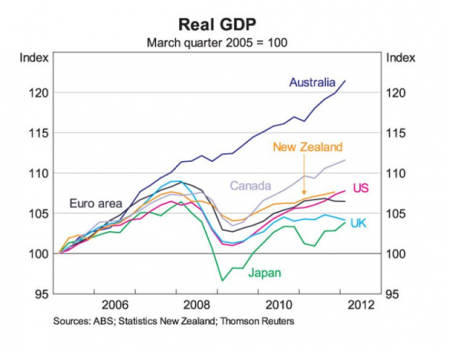 The Opposition at the time vigorously opposed those stimulus packages and urged spending at about one third the Rudd Government’s quantum.

All countries which implemented stimulus at this level – every one of them – suffered serious recession and are yet to recover to 2008 levels of jobs and overall economic health.

These are the unemployment rates of those nations which implemented only modest stimulus spending during the early stages of the GFC:

These comparisons strongly suggest that had Australia responded as the Coalition urged, the jobless would have peaked around 9% and would still be above 7.0% today.

This would have entailed negative growth, lower wages, greater deficits due to lower tax revenue and higher dole payments, debt expansion, loss of credit ratings and overall decline in quality of life.

This is not a scare.

This is the reality in a fragile global economy.

The whole Euro area has been in recession for the past year. Traditionally robust economies including Finland, Denmark, Ireland and the Netherlands are still in recession ― with horrendous social costs in suicide and despair as well as economic disaster.

2. There will be a shift in wealth and income from the poor and middle to the rich. This has been the impact of tax and other changes by previous Coalition governments.

At least this time they are being upfront about their intention to redistribute towards the wealthy. The Coalition’s paid parental leave scheme, for example, offers full wages of up to $150,000 per annum for six months for rich parents, but a fraction of that for the poor.

Other foreshadowed changes will do the same.

3. Cutting the carbon tax risks not only reversing recent substantial declines in emissions but losing a vital revenue stream which business now accepts.

This was estimated in Treasury’s Pre-election Fiscal and Economic Outlook statement at $16.4 billion over the next four years, then much greater amounts beyond.

This seems as clear a case of lose-lose as imaginable.

4. The superannuation system the Rudd Government intends to strengthen will be weakened under the Coalition.

History is instructive. The Coalition did not support compulsory superannuation in the early 1990s and has not supported the scheme’s expansion since.

Yet, as a former Labor minister affirms:

“...the superannuation pool of more than $1.3 trillion provides a buffer against global instability, as well as an indispensable source of income security for retirement. And it has saved the federal budget – and therefore taxpayers – billions of dollars in spending on the age pension.”

5. The figures available so far on expected Coalition income and expenditure simply do not add up.

Chief Australian economist for Bank of America Merrill Lynch, Saul Eslake, wrote a detailed report last month for clients on how a Coalition government would manage the economy [IA emphasis].

'By our reckoning, over the remainder of the election campaign, the Coalition needs to announce additional savings measures in the vicinity of $30 billion over the four years to 2016-17 in order to be able credibly to claim that it would produce better bottom line outcomes than those projected (by Treasury and the Department of Finance).'

This $30 billion gap must be met by either not delivering promised programs, or cutting existing services, or further deficits and debt. Or a combination of these.

'Given its persistent opposition to attempts to restrain growth in entitlement programs, its commitment to introducing its own big new entitlement program (paid parental leave), its equivocation about the GST, and its general commitment to cutting taxes, it's unclear whether and how a Coalition government would deal with the longer-term challenges confronting Australia's public finances.'

6. There are major disagreements within the Coalition on the fundamentals of economic management.

Again, Australia’s embarrassingly laughable media coverage has papered these over.

'… the possibility of significant and ongoing cleavages between genuine economic liberals such as Messrs Hockey, Robb, Malcolm Turnbull, Senator Arthur Sinodinos . . . and a combination of the National Party and other Liberals who are more sceptical of markets, and more inclined to favour universal welfare entitlements, including in many cases Tony Abbott as Prime Minister.'

As analysed here at IA and elsewhere, Abbott’s Budget reply speech in May contained at least 20 falsehoods.

Hockey’s May speech also contained more than 20 furphies, some the same as Abbott’s and a few novel ones.

There are two explanations for this. They just don’t comprehend economics. Or they understand well enough but choose to lie.

To complicate matters further, they don’t even agree with themselves.

'On issues such as government debt, Hockey is a chameleon. On the one hand, he is an advocate for 50-year government bonds … on the other, he vigorously suggests the debt is bad and that he will reduce or even eliminate it.'

Hockey has argued for target budget surpluses in every year of the Coalition’s first term of only 1% of GDP, but has also advocated higher spending and cutting revenue.

He cannot have both.

Those are seven immediate perils. There are others.

The risk seems just too great to contemplate.

Read the previous articles in this series: