The Morrison Government's 2020 Budget message is a trillion in debt and no "baked in" spending or "unfunded" empathy anywhere in sight, writes managing editor Michelle Pini.

In the words of Maya Angelou, “When someone shows you who they are, you should believe them the first time”.

This Coalition Government and its ministers have shown us repeatedly who they are and what they value. They value power. They value money. They value anything that will help them acquire and maintain the first two values. These are the core priorities of this Government.

And these key “principles” were apparent from its very first iteration, when the Abbott/Hockey Government set forth with its divisive economic approach, characterised by heartless statements such as:

"The starting point for a first home buyer is to get a good job that pays good money."

It continued through the Turnbull/Morrison sideshow, promising change but delivering the same neoliberal package, only now wrapped in the shredded ribbons of social and environmental progress.

And as Scott Morrison and Josh Frydenberg took over the trickle-down reins – emboldened by their surprise re-election – today, it is one giant box of neoliberalism pumped up with a whopping course of steroids and no “unfunded empathy” in sight.

Never is this core philosophy more evident than when the Abbott/Turnbull/Morrison crew get to put our money where their mouths are and on which our mouths depend.

As expected, the 2020 Budget has not veered from this overall game plan. Not the peddled “we’re all in this together” bedtime story, but the one policy which the Liberals took to the electorate last year: the tax cut game plan. This plan lives up to their core ideology mentioned above and has consistently been at the forefront of the Morrison Government's “vision” for Australia. 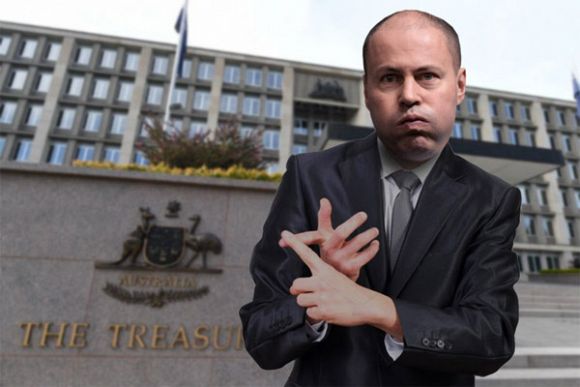 Josh and Scotty from Marketing: 9 reasons why we're not all in this together

After Josh Frydenberg’s $60 billion creative accounting error this week, it’s so lucky that, as the PM keeps reminding us, “we’re all in this together”.

TAX CUTS TO THE RESCUE

Suffice to say, if there’s a question, problem or a calamity, the answer, solution and response is always “tax cuts”.

Now, it may be argued – and has been, often and convincingly, in fact – that tax cuts, reliant as they are on the disproven Laffer Curve, do not work. Any benefits of corporate tax cuts are usually pocketed. This is even more likely when there are no accompanying conditions for business, such as wage rises.

But, whether there’s a global pandemic, dismal economic growth, unprecedented debt, record unemployment or all of the above, the Coalition's answer is always the same: tax cuts to the rescue.

This latest budgetary dog’s breakfast of a trillion dollars in debt, ridiculous levels of unemployment, no surplus anywhere on the horizon (despite previous promises), millions living hand to mouth and imaginary pandemic cures and trickle-down miracles has been embraced with gusto by the ever compliant usual media suspects. Some even went as far as evoking metaphors of "clouds lifting over Parliament House".

However, to give credit where credit is due, ABC's Leigh Sales had a good go at pointing out the hypocrisy of the Coalition’s previous “debt and deficit” war against Labor. She asked Treasurer Josh Frydenberg to explain why, after quadrupling the debt, the Coalition did not now concede that Labor’s game plan had been a good one during the GFC.

No, it was different, mumbled Frydenberg, because:

"...And, and they baked in spending, that we inherited and because of the diligence that we had, we were able to deliver the first balanced budget in 11 years."

Sales persisted, asking if he would now admit their previous criticism of Labor was dishonest, to which the Treasurer replied:

"Again, they baked in spending, they spent it on pink batts and, of course, the GFC was a fraction of what we're seeing today."

Nonetheless, here we are with tax cuts and "debts and deficits" aplenty, and thus, we will now attempt to break down the key points of the latest trickle-down Budget fiasco.

For those on JobSeeker, the $550-per-fortnight Coronavirus Supplement has already been slashed to $250 per fortnight and will cease completely by December 31.

If you’re under 35 and looking for work, employers can receive up to $200 a week in wage subsidies if they hire you.

Tough luck if you’re over 35. You may actually get the flick so your employer can hire a younger, subsidised worker. There are 928,000 currently unemployed people who do not meet the criteria for this subsidy.

Those on the aged or disability support pension, carers allowance or veterans payments – not unemployment or youth allowance – will receive two payments of $250.

There is absolutely nothing in the Budget for the homeless.

No “baked in” spending or unfunded empathy for the destitute there, then.

Just kidding! There is nothing in the 2020 Federal Budget that might remotely be seen as advantageous for the environment or climate emergency mitigation.

Gas and assorted fossil fuel industries, however, will continue to receive now increased government subsidies to pollute at will.

TAX CUTTING MORAL OF THE DAY

Basically, the Coalition’s 2020 Budget message is clear. If you’re poor or destitute, don’t spend your generous tax-cut or “handout” all at once — the economy needs your money to be “stimulated” enough so it can provide more tax cuts.

And if you’re rich, make sure you share your extra windfall so it can trickle down on the rest of us poor saps who are actually paying for it.

Just kidding! We know you’ll put it in the bank, or buy more shares.

The most important budget in recent history is about to be announced. It will have consequences for millions & shape the face of 🇦🇺 for the decade to come. Which is why we made an Honest Government Ad to help people understand wtf's really happening #auspol @Budget2020 pic.twitter.com/81XdISI2Qp