Asylum seeker debate: The battle for the heart of the Labor Party

The most heated debate to come out of the Australian Labor Party’s National Conference was on asylum seekers. In the end the ‘turn them back’ policy (as it has come to be known) was voted up. Many people in Labor and the community want a more humanitarian approach.

Conversely, those loyal to every official Labor policy have been crying that asylum seekers is only one policy among many. The community is too asylum seeker centric they say.

Such people miss the point.

Asylum seeker policy over the past 15 years has made people question what the Labor party means to them. Is it a centrist party that will, from time to time, educate and nudge the public to places it may not be immediately ready for? Or, is it purely a party of the center, taking the populist position always?

At the Labor Conference, important positions were voted up, such as an ambitious renewable energy target and a conscience vote on marriage equality. The same policies that some believe should have taken more focus away from asylum seekers. These policies have broad community support.

For example, a 2013 poll showed 64% of Australians support marriage equality. This is likely to be higher now, since Australia jumped on the euphoria of marriage equality as it swept through Ireland and the United States.

Labor’s renewables policy is another example — committing to a 50% renewable energy target by 2030. Polling data shows 73% of Australians support a rise to 50% or higher.

While there has been some contention from the business community, Labor frontbencher Joel Fitzgibbon allayed concerns when he said:

Unions have also jumped on board.

Like the community, most in Labor strongly support these positions. They’re very important, however because they have strong community backing they represent almost zero electoral risk.

Which is why many focus on asylum seekers. 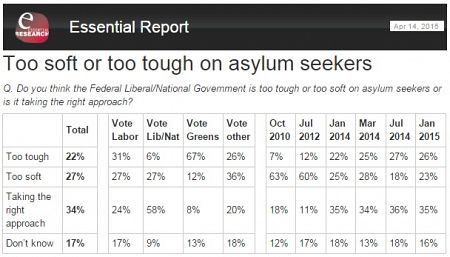 The Essential Vision Poll conducted on April 14 gives us an impression into how the public is thinking on this issue:

The centrist position is the one Labor has again taken — “turn them back”.

There are obvious reasons why many Labor supporters feel strongly about this issue. The hypocrisy burns deep. Many have descendants who arrived by boat as convicts, post-war immigrants, or ten pounders. All have added to the nation.

For those of us wanting a more humane approach, we believe there are times when the community can be educated and moved towards a better moral position.

This has been done on contentious topics before.

For example, what would have the polls said in 1965 when Don Dunstan convinced the party at the National Labor Conference to eradicate the White Australia Policy? Or when it was finally wiped out in 1973 upon the Whitlam Labor Government coming to power?

Or what would have happened if Paul Keating cared what the polls said in 1992 on Indigenous and non-Indigenous relations? You could take a safe guess to say that there’s zero possibility he would have read one of Australia’s greatest and most significant speeches at Redfern.

Importantly, Keating won the next election.

However, there is a key difference between Keating’s position in 1992 and the one Bill Shorten finds himself in now. That is, Keating was in power and had political capital to burn. This should give those who want a more humane approach on asylum seekers some hope.

Political capital is used to describe the electorate’s level of “trust”. Reformist politicians use it to instigate significant legislative change that may be difficult for particular voters. A first term government that has recently won a substantial electoral victory is generally assumed to have influential political capital. The driver of the reform needs to be able to explain why the changes are necessary.

Paul Keating did just that when pursuing the introduction of Native Title as Prime Minister in 1993. He faced fierce attacks from the opposition, and mining and pastoralists groups, all of whom protested loudly with a public campaign of lies about Aboriginal people gaining access to land.

But just before Christmas 1993, it was finally approved by parliament. The Native Title Act came into force on the first of January, 1994.

However, it was also Paul Keating who said there’s no use having radical reformist policy while in opposition.

My hope is Bill Shorten is taking the popular position now to win a clear majority at the next election, before working off the momentum of political capital to educate and convince the public that a more humane approach on asylum seekers is the right thing to do. By doing so, he will step into the ranks of other Labor Party greats — such as Dunstan, Whitlam and Keating.

Change the rules: Tipping the scales in favour of workers' rights

Why Australia doesn’t have a Bernie Sanders

13 December 2015, 11:00am Gerard May compares Australia's economic position with "The Great Recession" facing ...

Why are Liberal and Labor so infatuated with start-ups?