EVEN WITH the dark shadow of Rupert Murdoch still hanging over politics for more than 50 years, the future of Australia always looks brighter when the National Conference of the Labor Party is held.

Suddenly we see and hear rational and modern ideas of future developments being intelligently debated, in contrast to Liberal-National ideals that began from the dark ages of the 16th century and have shifted only rarely since then.

All the garbage hurled against Bill Shorten when he mildly suggested that there might be a better way to deal with asylum seeker problems has crumbled.

It leaves the Murdoch newspapers and the Abbott government looking even more ridiculous.

To understand Bill Shorten's suggestion to the party requires more mental strain than the Liberals and Nationals have to offer.

Shorten's career has always, as I see it, been that of a negotiator, one who sees a problem and sets out to find a sensible solution where two sides must come together and reach an agreement acceptable to both sides.

As Independent Australia (25/7/15) reported, the United Nations refugee body (UNHCR) issued a veiled rebuke to Bill Shorten over his proposal on boat turnbacks, which was accepted by the National Conference over the weekend.

In my view, this was premature. The UN could, if necessary, have contacted Shorten to seek more details about his original pre-conference statement. It was relatively clear what he was saying from the start, but the matter had to come to the party's conference before it could be fully expounded and explained.

Asylum seekers have rights, but so does Australia. Bill Shorten, unlike Tony Abbott, is not a man who shoots off his mouth first and then finds he is wrong afterwards.

There is nothing wrong at all with the concept of accepting that, in a world undergoing many difficulties and disruptions, Australia might do the right thing by opening its gates to more people who want to escape from murder and torture, while at the same time increasing the importance of using our right of accepting only suitable applicants for entry to our shores.

It may be very well for the UNHCR to demand that Australia welcome anyone who wants to come here on a boat and land on our shores with no invitation. If the UNHCR sees Australia as cruel in its handling of asylum then that is their problem.

But in our wide open landscapes and thousands of miles of open seashores we cannot logically meet the demands of allowing people to invite themselves here in the hands of unknown criminals making money by persuading them that they will be made welcome here.

Australia should not be expected to accept anyone and everyone, nor be forced to deal with an invasion of people unknown in terms of character, identity, and irrational beliefs and behaviour.

Australia should not be ashamed if we decide that we should use our naval strength to protect our borders from criminals and invaders who might demand entry.

The first invaders of Terra Australis were not the British, who came here because their government of the time wanted to get rid of people, some of them real criminals and some of them merely rebels of British invasions of other people's lands, such as the Irish, who were being exploited in their own homeland.

Before them were the Dutch in the 16th and 17th centuries, only interested in the gold and silver they could find in foreign lands and history suggests that they were never aware that there were aborigional people here at the time and if they had known of them they certainly would have slaughtered them as they did with the  people of all the countries they invaded and so did the British who became Americans — and we know what happened to their kidnapped slaves and the Native Americans, who were the original owners of the land that was their own.

In the end, it was not the British who built modern Australia. It was  Australians, immigrants at first but soon the builders of the nation we have today. My own family came here to settle in 1860.

And let us not forget that Dr Bert Evatt, a Labor Party leader, was one of the founders and the first head of the United Nations, of the UNHCR is a part.

As I understand his intentions, Bill Shorten's approach to the current problem of asylum seekers is both entirely rational and totally reasonable and workable.

Our respect for Australia's Indigenous people has improved over the centuries. Progress has been slow and sometimes reluctant but it has been improving and should continue to do so with a further invasion forced upon us by the UNHCR and caused by world problems which we did not cause, but in which we served at great cost to ourselves. In the meantime, the multi-billion dollar empire that Rupert Murdoch created between 1952 and today is showing more signs of crumbling.

He has been humiliated by the U.S. Republican Party, the party that once saved his bacon by preventing his bankruptcy, has turned its enormous pressure over him to force him to backdown on his personal attacks on another billionaire, the rising presidential candidate Donald Trump, whom Murdoch had been ridiculing both through his most promininent American newspaper, the New York Post, as well as through his personal Twitter account.

Not only is Murdoch under enormous pressure from some of his major shareholders, particularly over his appointment of his two sons to succeed him. The shareholders have no confidence in Lachlan or James, who remain as Murdoch's own personal choice without reference to the shareholders.

The brothers are the head of their company only because Murdoch wants them there. The shareholders have no confidence in either of the junior Murdoch's, not least because they have never shown that they had any previous capability to control the companies they already run under their father's supervision or the financial skill needed to protect shareholder value.

Rupert had maintained profitability, but often not sufficiently to satisfy the investors, even though the Murdoch family holdings had been kept at a much lower level than the majority of investors.

When is Donald Trump going to stop embarrassing his friends, let alone the whole country?

In the meantime, in America, Donald Trump has appeared as a leading Republican candidate, whom the party heads have continually ridiculed.

But now Trump has become the most popular of the candidates to voters and, indeed, the only one who might just knock Hillary Clinton off her pedastal as the most popular and most likely successful Democrat, to lead the United States as the first female president.

The views expressed in this article are those of the author and not necessarily those of Independent Australia. Read IA's weekly editorial on the topic of refuge boat turnbacks (26/5/15) below. You can follow Rodney Lever on Twitter @RodneyELever. 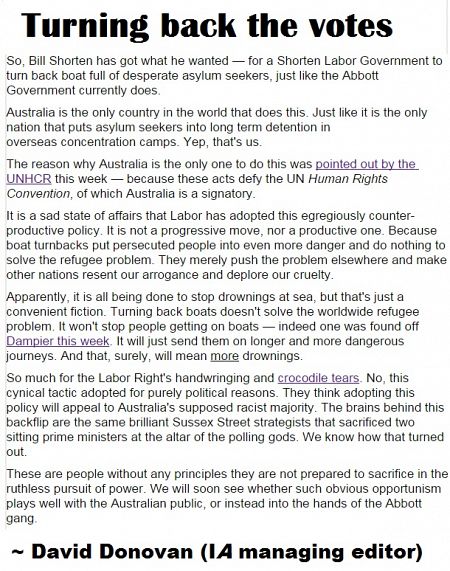