Telling the Budget story: The devil not in the detail, it's in the big picture

The rush of details that has to be  part of the ritual of a Federal budget this time quickly came down to a bigger and more long-term political conflict over the push by the Government for a flat tax. Media correspondent Lee Duffield says most reporting started out with the usual retailing over who gets what, but the Budget presented on Tuesday night emerged as a replay of the war-torn 2014 federal budget in slow motion.

THE SLOW MOTION aspect of the proposal brought forward by the federal Treasurer Scott Morrison, was the attempt to link short-term, limited tax cuts to a massive change that would put Australia effectively on a flat tax by 2024.

Taking maybe a cynical look at politics, it sees one side – Liberals – wanting to redistribute wealth from have-nots to haves, and the other side – Labor – the other way round.

GRABBING FOR MONEY — FOR SOME

In 2014, the approach was to remove so much government spending the level of services would be close to collapse, but haves would get to pay in that much less tax. It was divisive and such a transparent grab for money, for some, in such a hurry the Government of the day faced certain doom at the elections. Malcolm Turnbull was called in to replace Tony Abbott as a more respectable face of government.

This week's plan to lock in changes to the tax scales would see one whole category of tax rates disappear so that the great majority would each pay just the same levy — about one third of their earnings.

The Green party leader Richard Di Natale called it out early, pointing out on a television panel that over time cuts accompanying such a change would end up giving a few hundred dollars take-home to a taxpayer on $40,000, but $7,000 to somebody earning $200,000.

It would trash the Australian system of e so-called progressive taxation worked out over the decades, based on the idea that those with larger incomes pay a relatively bigger proportion of tax, because they can afford it and they are getting a lot out of being in the Australian economy.

The progressive idea also says that taxation is an investment in civilisation; governments need revenue to provide a good deal for citizens and improve the standard of the society — one with good quality of services.

A common factor in the impatient 2014 exercise and the more long-term one in 2018, was the involvement of the Finance Minister Mathias Cormann.

First time around, he was off-sider to the then Treasurer, Joe Hockey, celebrating together in a famous cigar-smoking routine; this time he was close by as Scott Morrison blasted out the "good news" — in that Treasurer's command performance near-manic delivery.

The last successful big move in the direction of regressive, instead of progressive, revenue earning was the Howard government's achievement of the goods and services tax, where anybody who buys something pays the same level of tax as anybody else — and that source of revenue takes the pressure off government to bring in more income tax.

Liberals liked the GST because it was regressive, more fair to haves than have-nots and Labor could live with it because it would at least deliver a large amount of revenue to be spent on service to the public.

A second big change in the 2018 Federal Budget was that it keeps the $65 billion in tax cut to big business. If the Government can get it through, it will include massive benefits to half-bent, unreformed banks — informed estimates have put the major banks' share of the cut at $9.5 billion.

The company tax cut would mean the big four banks get an extra $9.5 billion dollars. Really.

Australia’s big four banks are some of the most profitable banks in the world and are making record profits. #budgetreply pic.twitter.com/skptZYlFfz

WHERE DOES THE MONEY COME FROM?

As a third main dot-point, what about this sudden flood of revenue which is said to have made it possible to spend big amounts of money, for example, eventually, on many nation-building infrastructure projects that have been in the pipeline over successive budget years?

Six months ago, or even one month ago, there was no such revenue flood to speak of — no "raining revenue", as it was plied for receptive journalists to uncritically repeat.

According to the Treasurer, when the man drew breath long enough to hear a question, it came out of a general, sudden growth spurt in the world economy.

A theory put up by a few economists is that years of deficit spending might have started to stimulate economic activity, starting a money-flow.

Some, like an industry super spokesperson, were suggesting that the projections being made in the Budget for growth in Australia, like assumptions about wages actually starting to grow, were not sound -- the whole calculation could be at risk.

Said another on the economists' panels, the lop-sided and slow motion change, involving the removal of a tax bracket, would draw off bulk money from the Treasury, producing a "significant drag on budgets over time".

The budget ritual is a picnic day for journalism, beginning with the leaks and predictions, then the study-in as hundreds of reporters and others get to work in the famous lock-up, then the announcement of the collection of bits and pieces of initiatives, then details and, finally, the analysis — where the whole truth may be found.

Overall, the infusion of resources and attention delivers a day or two of excellence in media services – accurate information about new developments with a direct bearing on everyday lives – and this time was no exception.

The points were flashed up quickly as ever, especially by not-that-critical commercial broadcast outlets telling about a $500 tax benefit for some, next year, spending to help innovative projects for the aged to live on at home, or the key infrastructure projects in nominated parts of the country. 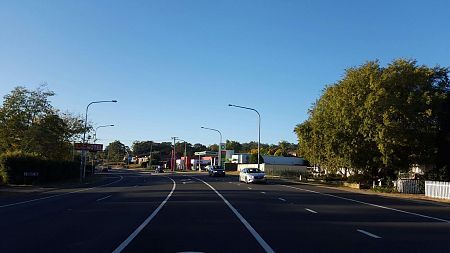 Traffic moving along the New England Highway through the outskirts of  Muswellbrook. The local Labor member was wanting money for bypasses — not coming from the Liberals this time (Image supplied).

The ritual extended as always to local members explaining the impacts in their own back yard.

His neighbour in Hunter, Joel Fitzgibbon, had checked up on the development projects and noted there was nothing for highway by-passes wanted for the towns of Muswellbrook and Singleton.

All part of the ritual.

Likewise for media, outlets with a definite editorial disposition rushed to point out the acts of "generosity" or disappointment, none so much as the reliably partisan, Government mouthpiece of a paper, the Sydney Daily Telegraph, declaring: 'Up to $350 p.a., for 10-million tax payers'.

Getting into the analysis stage, it announced "cutting edged tax reform as economy heads back to black", although, also spotting the problem with the target date of 2024, in two or three elections' time: "there's a long wait for a cut - and there's a federal poll".

As the war of words went on some interest was beginning to focus on items not mentioned: no spending help for TAFE, freezing of funds for the ABC with impacts around $28-million p.a., or the unfulfilled demands from many quarters for an increase in unemployment benefits running at just under $40 per day. For many in Australia being alive is far from blissful and being young is no heaven.

.@billshortenmp: Labor can afford to cut the taxes of 10 million Australians without cutting services because unlike the Liberals we are not wasting $80 billion on a discredited corporate tax give away to the top end of town.

The great lie that the Liberals tell about society and about Budgets – they assert they're the wealth creators and the makers, while the rest of us are just the leaners and takers.#BudgetReply #auspolhttps://t.co/DDiHoZbY2N pic.twitter.com/nMVB4NfVGU