THERE WAS a piggy little glint around Treasurer Scott Morrison’s eyes as he batted off Leigh Sales' questions in the ABC studio after Tuesday night’s Budget. He glistened with porky confidence as he rattled away in his trademark yammer — shooting off figures like a Gatling Gun, at such a rate Sales had not a prayer of testing whether any of them were accurate or apocryphal. And then smiling at her at the end of each barrage with a look of supremely unctuous condescension. He was as happy as a pig in its natural element. It was truly a revolting spectacle.

Morrison’s honey glazed look suggested that, by putting the price of a cheap hamburger into Australian people’s pay packets, the Treasurer clearly thinks his Budget is ‒ in the immortal words of a much better beancounter ‒ “the one that brings home the bacon”. Because it is being sold by Morrison as a Budget for the lower and middle income earners.

It isn’t, of course — but most of Australia’s mainstream media will probably fall for this line — this cheap two-card trick. Well, they will if ABC 7.30’s post Budget wrap on Tuesday was any guide. Then, both Insiders host Barrie Cassidy and ABC business editor Ian Verrender told Australia the Budget gave “nothing” to high income earners, despite this statement being not only wrong, but also utterly false and misleading.

Suggests to me Cassidy and Verrender do not fully understand how progressive taxation works, which is rather surprising, to say the least. #abc730

For a start, everyone earning more than $87,000 will receive a tax cut on July 1, providing the Budget passes, as the 37% marginal tax rate threshold is set to rise to $90,000. You would think the public broadcaster’s business editor would understand the nature of progressive taxation. Perhaps he was overcome by spending a gruelling day being force-fed Government propaganda in the traditional and increasingly pointless Budget Lock-up?

The reality of this Budget is that the destitute and disadvantaged get next to nothing; the working poor very little; the middle class a modest bump; and the rich, as ever, the spoils.

Let’s move past the nonsense: the unlikely rivers of gold flowing from cracking down on illegal tobacco; the tinkering around the edges of superannuation and pensions; the other trifles and trinkets. Let’s even move past Morrison slashing another $83 million from the ABC. Let's look up and see the mountains.

In fact, there were only three significant measures in this Budget: a modest tax offset for small to medium income earners, a gradual flattening of Australia’s progressive taxation system and yet another attempt at siphoning public money to big business through cutting the corporate tax rate.

Of the three proposals, only the modest personal income tax cut offset is temporary, to be brought in at the end of the next financial year and phased out in 2022-23. The other measures are meant to permanently refigure Australia's taxation system.

In any case, the tax relief provided by the temporary tax offset is derisory, as shown by the below table: 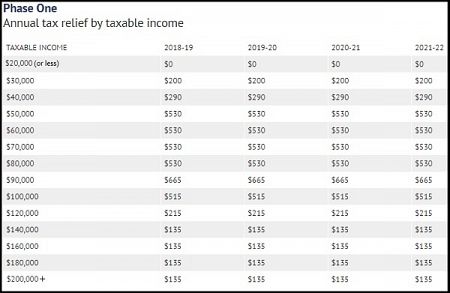 The first, because a flat tax system delivers greater benefits to the wealthy through lowering their average tax rate.

The following table describes the benefits of raising the thresholds and cutting the number of tax brackets — almost $12,000 by 2024-25 for people earning over $200,000 (every single Federal MP): 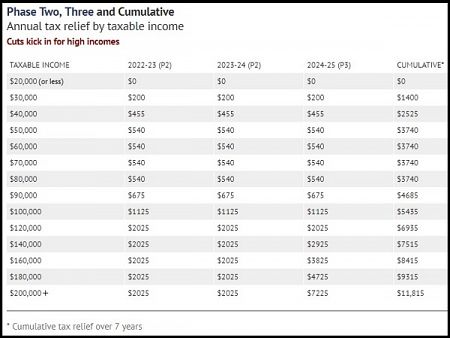 As for corporate tax cuts, any benefits for workers are more likely to flow to the bosses ‒ the executive class, rather than ordinary employees ‒ in the form of salary increases, bonuses and share options. Also, because wealthier Australians are more likely to own shares they will therefore reap the lion’s share of any returns from increased stock prices and dividends.

In short, it is a con — but one, happily, unlikely to succeed.

This is only half the story! The full length version of this editorial, originally published as part of the Independent Australia weekly subscribers' newsletter, may be read in the IA members only area. It takes less a minute to subscribe to IA and costs as little as $5 a month, or $50 a year — a tiny sum for such superb journalism and a host of other extras! 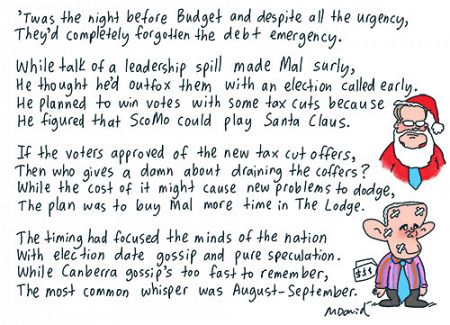 I call this the #magicpuddingbudget. Lower taxes, more spending, and the end of debt and deficit! Abracadabra! Shazam! pic.twitter.com/wsumnPeq6O