Sochi and the renewable energy target

If we can spend $307 million on sport and $20 mill to get a few minor medals at the Winter Olympics, we can afford to keep the renewable energy target, writes Lachlan Barker.

In my weekly blog I recently wrote that I felt I needed a boilerplate opening paragraph which went something along the lines of:

'I was incensed this week when "x" [member of the Abbott Government], did "y" [latest offence to intelligent voters].'

This article needs that from the off.

The particular piece of rage-inducing lunacy that slithered to the top of the noisome pile of slime that is Abbott Government policy was the cutting, sorry, 'reviewing' of the renewable energy targets.

For future reference, note that when an Abbott acolyte – sorry, troglodyte – says they are 'reviewing' something, it means that funding is being withdrawn; this is the simplest way to scupper anything that Government disagrees with.

So, what's the problem?

Well, I'll do my best not to make this article a long series of twenty per cents by this date and fifteen per cent underloaded by this week and the like. Even as I tried to read the documentation, I found my eyes glazing over with all the figures, so I will try to coalesce it down to manageable bites.

The Howard Government introduced the mandatory Renewable Energy Targets (RET) in 2001 and this led, as you would expect, to an increase in investment in clean energy sources in Australia.

One example is windfarms in South Australia is, solar, both on roof, and at concentrated solar thermal (CST) plants, is another.

Despite all the sceptics crying at the time: "Solar only works during the day" and "none of these can provide adequate base-load power", the various renewables got a little toehold in the market and began making slow inroads.

The problem we have today is that, slow though this progress has been, it has already frightened the major players in the energy sector – Energy Australia (EA) and Origin Energy – so much that they called Canberra and told Treasurer Joe Hockey, Environment Minister Greg Hunt and Energy Minister Ian Macfarlane that they wanted this pinko, hippy, renewable energy thingo stopped in its tracks — pronto!

The three amigos duly obliged and called for a 'review', with the clear goal of knocking this clean energy nonsense on the head for good.

Now, when I did my research, I thought I was going to find that the reasons given by the government for stopping the RET and continuing with coal fired power would be the old standard "solar and wind are just not practical".

But much to my astonishment, I found that it was much simpler than that.

The energy sector big boys said that the RET must be stopped because, they aren't making the profits they used to.

Apparently, because of the high prices that Origin and EA charge, we homeowners have begun reducing our power usage to save money.

Hence a drop in profit for coal-fired energy companies.

Added to which, with an increasing number of homeowners asking for their power to come from green sources, the energy sector latched onto this as the primary cause of their falling profits.

And thus the call to Canberra to have the RET scrapped — an act of ecologic bastardry that will kill off, financially, many of the nascent green power suppliers.

So now we come to my vote for f$%^wit of the year, Burchell Wilson, Chief Economist of the Australian Chamber of Commerce and Industry.

He was on the ABC's 7.30 Report spouting a load of "renewable energy is costing the homeowner more" bollocks.

I have gone over his gobbledegook in his interview with Sarah Ferguson, and even I, the writer of this article struggle with his lack-of-logic.

So let's go with a couple of points.

First he says, the RET is costing "$1.6 billion across the economy."

$1.6 billion would buy a lot of solar panels and quite a few wind farms but, unless they've been superbly camouflaged with the sort of invisibility technology that Doctor Who would be proud of, I haven't seen them.

So exactly how the RET is costing us $1.6 bill? I confess myself mystified.

Then he goes on to say:

"Look, the problem with the Renewable Energy Target is it's a very inefficient way of abating carbon."

Please forgive me, but:

Investing in energy sources that don't release millions of tonnes of CO2 a year seems a pretty efficient course of action to me, however, I thought I'd better see if he could clarify and, so, though it physically pained me to do so, I rang Burchell for some clarification.

"Burchell, you said in your interview with Sarah Ferguson on the 7.30 Report that the RET was a very inefficient way of abating carbon. What is an efficient way of doing so?" 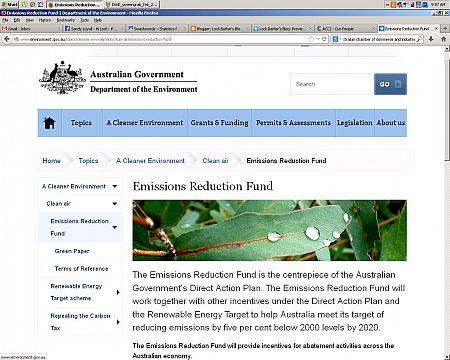 So, Burchell Wilson is on one hand saying that the RET is an inefficient way of reducing carbon, so cites a "better idea" — an idea that itself uses the RET as one of its key strategies.

He, Burchell, obviously has the tip off that the RET would be scrapped and so he could quote the ERF, knowing that soon the RET would no longer be a part of it.

Then he says that the RET is costing homeowners

The figures from IPART (Independent Pricing and Regulatory Tribunal) put the figure at about $40 in NSW — with some states less than that.

And to give you a concrete example, a work colleague of mine, Susanna, has solar panels on her roof.

She told me that her last bill was $98 for a quarter.

Compare this with the apartment of a friend in town, who has an inefficient air conditioner, who paid $900 for a quarter.

So how the RET, with its promotion of solar panels on the roof of every dwelling, is actually costing the homeowner, only Burchell could possibly explain.

So moving on, remember that figure $40, because when Joe Hockey eventually scraps the RET and condemns us all to a shortened future, gasping like newts at the bottom of an algal-encrusted pond, you can be sure he will use the "there isn't enough money" argument.

He has already flagged this with his speech at the G20, saying that Australia is going to "run out of money" of we don't do something about those perennial destroyers of our economy, public health, dole bludgers and the 'massive' cost of installing renewable energy sources.

To which I would say this, if the RET is costing me as a dwelling occupier $40 a year, then I for one, though I am on a limited income, am more than prepared to pay this less-then-a-dollar-a-week out of my own pocket to see there is an ongoing commitment to clean energy sources in Australia.

But if it's money you need Joe, then here's a suggestion, let's not go to the Winter Olympics.

There are nine million dwellings in Australia, so if we can the Winter Olympics — that's $10 we can spend on the RET for each home in Australia.

I feel that it's particularly galling, because the Winter Olympics is the province of the rich.

With the summer Olympics, the sports are usually egalitarian.

Anyone in Australia can go for a swim — either in the ocean or the local pool.

And anyone on Earth can run, indeed the greatest long distance runners on Earth come from some of the poorest countries.

But snow sports in Australia are definitely the province of the wealthy.

So why are we spending $20 mill to send spoiled brats from Mona Vale in Sydney and the Presbyterian Ladies College to the other side of the world?

Adding to the tooth-gnashing is, of course, the ever-growing understanding that we are bloody hopeless at these sports.

Our most famous gold at the Winter Olympics came in the speed skating, when everyone else fell over and Stephen Bradbury coasted through to win.

This time in Sochi, we got two silvers and a bronze.

Is that a decent return for $20 million of taxpayers' money

But even if we had "won" the WO, scoring ten gold, as Norway did, it still wouldn't be worth it.

We have far more important things to spend our money on — namely, investing in clean energy sources so we as a human race can survive longer than it takes the planet to tip over and we all drown or asphyxiate.

Elsewhere, the ABC reported that in 2012/13 the Government spent a staggering $369 million on sport — most of that to elite sportspeople.

So I say Joe it's time to come clean, next time you want to cut something because you don't like it, in this case the RET, at least be honest and say that, don't try and tell us that there is not enough money.

If we can spend $369 mill on sport, and $20 mill to go to the other side of the world and fall on our collective arses, then we can find the money to keep the RET.

You can read more by Lachlan Barker at cyclonecharlie88.blogspot.com.au. 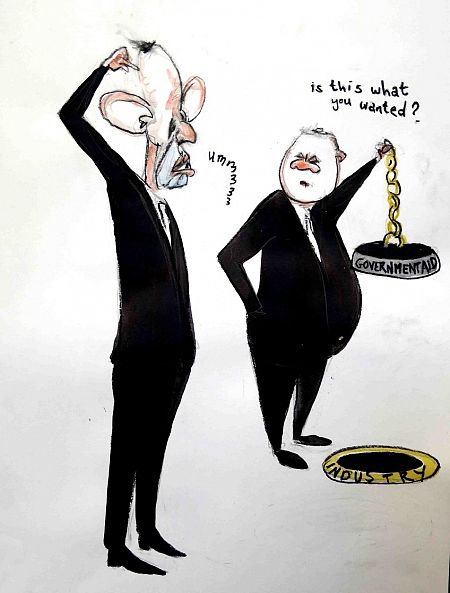