Queensland election: What we learned

What have we learned from this election? That was a familiar line from former Premier Campbell Newman but it’s worth asking the question now. 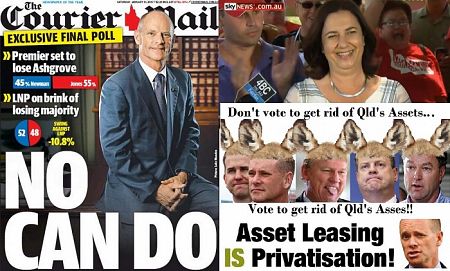 The Queensland election 2015 summarised in a few images

We have learned that voters do not want their assets sold. They saw through the $80 billion lie that was the excuse for such a move.

As Independent Australia pointed out, the general government debt in June 2012 was $29.513 billion.

We have learned that The Courier-Mail has joined The Australian, the Sydney Daily Telegraph and Fox News in leaving the ranks of media which can be trusted to tell both sides of a story and to properly investigate important issues.

This was a government so poor that it was under attack from people as diverse as arch tory Alan Jones and corruption buster Tony Fitzgerald yet The Courier-Mail failed to expose its many shortcomings.

Its blatantly one-sided coverage of the election campaign, with its frequent exhortations to vote for the return of the Newman Government, was an affront to its readers.

It was so beholden to the Government that it removed from an online version of a story about surgery queues the fact that 411,283 people were waiting to get on the waiting list.

And it repeated the Newman Government’s lie that Queensland was crippled by an $80 billion debt.

We have learned that the LNP failed to learn the lessons it should have done from the disastrous failure of the Borbidge Government which staggered from disaster to disaster between 1996 and 1998, ignoring principles of good governance.

Major damage to the Borbidge Government was caused when it attacked the corruption watch dog through an ill-appointed inquiry. Its attorney-general, Denver Beanland, refused to resign for his part in the attack, even though parliament passed a motion of no confidence in him.

Instead of realising that the independent watchdog should not be interfered with, the Newman Government’s attorney-general, Jarrod Bleijie, and his director-general, John Sosso, also launched an inquiry into the Crime and Misconduct Commission.

Common links with the events of 18 years ago are Mr Sosso, who was influential in both governments, and Tim Carmody, who was counsel assisting in the Borbidge Government’s inquiry and was given rapid promotion by the Newman Government to the position of chief justice — yet another source of voter dissatisfaction.

We have learned that Queensland voters refuse to be bribed.

Premier Newman offered Ashgrove projects worth $18 million – far more than any other electorate – but the voters put the state’s future above self-interest.

Print this image & plaster it all over #Ashgrove and surrounding suburbs to prove the #LNP pork barreling is rampant pic.twitter.com/bSDEoxXhwn

We have learned that voters don’t want a parrot as premier.

Queenslanders want a premier who answers every question with pertinent facts and explanations.

For all these reasons – and many more – this became the ABC election — Anyone But Campbell.

We were reminded that a government can only succeed if it takes people with it.

Voters said from the start they did not want their assets sold but the government was determined to ignore them. A large section of the judiciary and many senior lawyers objected to the appointment of the chief justice. Doctors and public servants were put offside. Increasing the level at which donations to political parties could be hidden was a no-no. The lack of consultation on major projects was another.

Has the LNP learned from this election?

If it has, it will ditch Jarrod Bleijie, Jeff Seeney and Tim Nicholls from its front bench. All are irrevocably tainted by the decisions they made as ministers, especially Mr Nicholls, who was responsible for the three-year mistake with asset sales and the $80 billion lie.

Forget all those panels of 'experts' tonight. Let's not forget the little girl who called it first. #qldvotes2015 pic.twitter.com/oihyM3hiXV