Queensland Premier Campbell Newman and his Treasurer Tim Nicholls continue to lie blatantly and shamelessly to Queenslanders about the size of the debt the Budget has to deal with.

It is one of many demonstrable lies (but by far the biggest) told by the LNP — which truly deserves the title of the Lying Newman Party.

It has also lied about the crime rate, hospital waiting lists, electricity assets and electricity prices — all potentially vote-changing issues.

Treasurer Tim Nicholls was at it again on Tuesday (October 7) in trying to convince Queenslanders that the State Budget has to deal with an $80 billion debt and interest repayments of $4 billion a year and, therefore, we have to part with the family silver.

It is a fact that the correct figure, using the LNP’s skewed accounting method, spelled out in State Budget Paper Number Two for 2014/15 (p96), is $$48 billion. 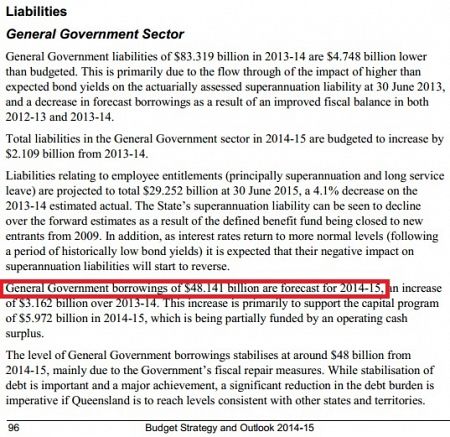 You might notice that not only is this $32,000,000,000 less than the debt claimed by the Treasurer as part of his “crisis” spiel but the LNP has added $3 billion to the debt with its own spending — an increase of nearly 7% in one year.

And repayments of $4 billion a year? Another lie.

Again the Treasurer’s own Budget Paper spells out the true figure on page 82:

Yesterday, Treasurer Nicholls stood in front of a Government banner saying ‘No asset sales’ and insisted that the Government’s plan to lease major assets was completely different.

Then again, on 12 October 2010, the treasurer was adamant that leasing assets was equivalent to selling them.

“… a fire sale, and asset sales will not fix the structural deficit created by Labor.”

And notice: he was also adamant that asset sales wouldn’t fix the deficit.

"The poles and wires transmissions stuff, I believe, should be owned by the people because they are natural monopolies."

“I am not going to be bullied by the Prime Minister into selling electricity assets."

On 7 October 2014, he announced the plan to privatise the poles and wires.

‘… investment funds and projects to help grow the State’s economy now and for future generations.’

Now $3.4 billion is going to be frittered away in buying Queenslanders’ votes by promising them, in the lead up to an election, that an LNP government will

Mr Newman used a similar vote-buying tactic before the 2012 state election, when he promised to lower electricity bills by $120 a year. They’ve gone up.

But wait these more — including lies about crime figures.

On 5 August, Premier Newman released a Joh-style ‘Queensland Unlimited’ video segment on YouTube with a caption that read:

‘Premier Campbell Newman today joined Minister for Police, Fire and Emergency Services Jack Dempsey and Police Commissioner Ian Stewart to reveal the rate of Queensland reported offences were dramatically down 11 per cent for the 2013/14 financial year.’

But media reports, typified by the ABC, reported:

And then some lies about health.

But the LNP was at pains when it was in Opposition to say that there was a huge waiting list hidden behind the waiting list for surgery — and that this was a crucial measure.

On 14 February 2012, then LNP health spokesman Mark McArdle said in a media release:

Is this the list which we should be talking about? Australian Medical Association Queensland president Richard Kidd said on 1 March 2012:

On August 4 this year Queensland Health Minister Lawrence Springborg was asked on Radio 4BC:

He saw no need to change that figure after the interview.

If it was a lie, as alleged by the Australian Medical Association in 2012 to ignore the waiting lists to see a specialist, it’s a lie today. And it’s a bigger lie by 80,000 people.

The list of lies goes on, of course, but this article must come to an end.

Outside Parli letting @theqldpremier know that leasing assets has the same awful outcome as selling them #not4sale pic.twitter.com/0zZSRTA6NG