Queensland Premier Campbell Newman’s support in his electorate is plunging. Steve Bishop recalls criticism of his likely replacement as Premier — and examines an issue likely to hurt Newman even more.

A MAN LABELLED “duplicitous”, “the ugly face of politics” and “tactical liar” is in line to become Queensland premier if, as seems highly likely, Campbell Newman loses his seat of Ashgrove in next year’s state election.

Newman’s tenuous hold on the seat is likely to be further weakened by his lack of objection to a development plan which would add thousands of car journeys to the already-clogged main arterial road through his electorate.

If Labor is unable to form a government after the election, Deputy Premier Jeff Seeney will almost certainly become Premier.

Di McCauley, the National Party MP for Callide until 1998, is scathing about Seeney:

‘[He] was my electorate chairman when I was the Member for Callide and that relationship was severely marred by his duplicity and driving desire to promote his own political future.’

She was so outraged when he became Opposition Leader in 2006 that the former minister resigned her life membership of the party, after having been one of the party’s major donors.

From her resignation letter:

‘I feel very strongly that I do not want…any part of an organisation headed by Jeff Seeney.’

In her biography, two years earlier, she had said:

'It seemed to me that Seeney was indeed the ugly face of politics and I wanted nothing to do with him.'

Perhaps his most notorious act was, while in Opposition, to accuse the Government of offering millions of dollars to Berri to locate a factory in Queensland because the Premier’s brother worked for the company when, in fact, the brother had no links to the company at all.

Respected political commentator Professor John Wanna summed it up in his Political Chronicles (p559) this way:

‘Seeney admitted the accusation was a "tactical lie" intended to flesh-out details of the Berri deal that the Opposition could not extract through normal Freedom Of Information requests. He steadfastly refused to apologise even though he had erred, and instead extended his accusations to include another company, National Foods.’ 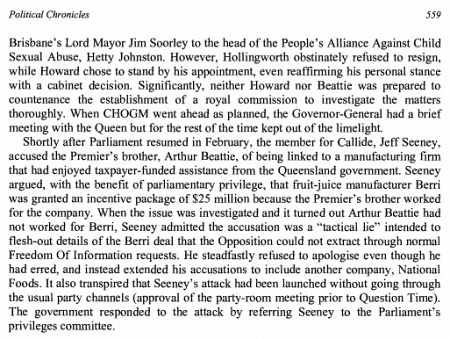 Seeney lasted only two years as Opposition Leader as Queenslanders decided they didn’t like his style and his plummeting approval ratings resulted in Lawrence Springborg taking his place.

But the Opposition’s lack of MPs with leadership potential saw Campbell Newman become leader in 2011 before he had won a parliamentary seat, with Seeney becoming the lame-duck leader in the House.

His reward was to become deputy premier once Newman was elected.

It could get worse, with a development application for two 2.25 square kilometres of land, most of it zoned rural and environmental management, sparking a NIMBY reaction in his electorate.

The land, at Upper Kedron, is immediately to the north of the Ashgrove electorate and, according to the local plan, there should only be ‘very low residential development south of Cedar Creek’ with road access only from the north.

But the company, Cedar Woods Properties Ltd, plans to build about 1300 homes, the vast majority south of Cedar Creek, with major access to the south, along Mount Nebo Road into the already clogged Waterworks Road — the main arterial road through the Ashgrove electorate.

Despite its plans contravening the zonings and the road access restriction, Cedar Woods says it has ‘strong council and State Government support’ for a development which will have a population the same size as Gatton.

And why would a company spend $68 million in May this year acquiring the land unless it was confident planning permission was likely?

An inquiry at the premier’s electorate office resulted in a statement that he is not objecting to the proposal — a decision sure to alienate thousands of commuters who already sit in tortoise-paced traffic every morning and evening.

How strong is the feeling about this development in The Gap?

A Facebook page Save the Gap set up less than three months ago to oppose it already has 900 'Likes'. 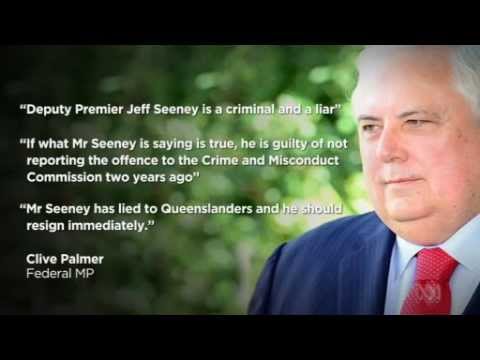