SCAM WARNING! In releasing the LNP’s election costings Campbell Newman has finally exposed the fact that his plan to sell Queensland's assets is a scam with little to do with reducing general Government debt.

Like many scams, it’s been cleverly constructed to make it appear like a genuine scheme. Bear with me while I unravel it for you.

The general government debt is the one which the annual state budget has to deal with. I’ll return to this in a few paragraphs.

According to the 'Strong Choices' plan, the GOCs comprise:

'... entities such as those that operate in the energy, transport and water industries.'

Queensland currently has 12 Government owned Corporations (GOCs) which have projected debt of $19.8 billion as at 30 June 2012, representing an estimated 32% of total State debt.'

The Government’s own budget papers explain that these

'... entities utilise debt financing as a source of funds for capital investment and to maintain an optimum capital structure” and the entities “are required to take a prudent and sound approach to the management of debt…'

In other words, it makes sense for these government businesses (most of which are corporations operating under the regulations of the Australian Securities and Investments Commission) to borrow money and use debt as a sensible economic option.

Queensland election: the battle to control the debt debate http://t.co/U2DEGJ2RHs

Moreover, these GOCs have to convince ratings agencies that their debt truly is self-sustaining.

'Usually, the financing of net capital expenditure in the Public Non-financial Corporations sector, whether by operating revenue or borrowings should not be of concern, as the corporations in this sector are required to operate under commercial criteria.'

So, crucially for the argument, their debt cannot viewed as excessive.

It is, therefore, the general government debt which becomes important in terms of this scam.

The Commission made it very clear in its report that the debt it was concerned about came from general government.

'The deterioration of Queensland’s debt position since 2005-06 was the result of a substantial increase in General Government net capital expenditure at the same time that the operating balance went into deficit.' 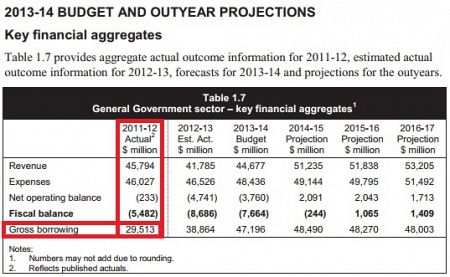 Nowhere in the report does the Commission explain how it arrived at a figure for gross debt of $64 billion, bearing in mind the debts of $19.8 billion from the GOCs and $29.513 billion from general government.

Despite this massive discrepancy, the report said it was the general government debt which needed to be reduced.

The Newman Government said this was why it needed to sell assets.

Its Strong Choices propaganda campaign was based on this premise:

'The Independent Queensland Commission of Audit recommended that the Government evaluate the State’s ownership of a number of assets as part of a comprehensive debt reduction strategy.'

But of the $37 billion the LNP is hoping to raise from privatising our assets, only $7 billion is being devoted to solving the alleged problem of general government debt.

'Of the $37 billion the government "conservatively" hopes to raise, $25 billion would be set aside for debt pay down, $7 billion of which would be used for general government debt, with the rest to go on debt owned by the government-owned corporations.'

We have been conned. It is plainly a scam.

If you're a QLDer read this. Newman is trying to con us just like @TonyAbbottMHR did. RT & don't let it happen http://t.co/ytsec7WpEv

Why would the LNP want to put $18 billion into government-owned corporations that don’t need it?

One reason: to use the money from the privatisation of one company to make the others more saleable and build a bigger war chest to fight the next election.

Don't be a mug when you cast your vote tomorrow.